Don’t Let This Crisis Shake You Out of the Markets

Buy low, sell high. Buy when there’s blood in the streets. It all sounds logical enough, but the problem is that logic isn’t the mover of markets, and oftentimes people are prone to ill-advised trades based on pure emotion.

No one can expect you to invest like a robot, though there’s a good reason why multi-billion-dollar hedge funds use computer algorithms to help them succeed in the markets. Emotionless computers typically outperform fallible humans because they’re not tempted to sell at the bottom and buy at the top.

It’s not emotionally easy to buy when so many people are in a mood to sell everything. If you stay glued to the financial news TV programs, they’ll shake you to the core with “Markets in Turmoil” graphics and all kinds of scary charts and graphs.

They’ll use plenty of red letters, since that color reminds us of blood and, as they say in the TV news industry, “If it bleeds, it leads.” Remember, their prime directive isn’t to help you build up your wealth, but to keep you watching for as long as possible.

You might also check your portfolio’s daily performance and see red numbers. On a deep psychological level, this might prompt you to exit your stock positions in order to make the bleeding stop.

That’s capitulation: just giving up on your positions and taking the loss. Usually, the problem started long before you sold your stocks, particularly if you didn’t have an investing plan when you purchased them in the first place.

It only gets worse if you spend your precious time on popular financial message boards and chat rooms. There, everybody’s bearish on a down day in the markets, and bullish on green days. Wherever stocks just went, that’s where these social-media gurus are going.

Don’t expect to find logic or inspiration on those social-media hubs. Like the analysts on TV, they’ll have you buying high and then selling low – the complete opposite of what successful investors like Warren Buffett and Charlie Munger do. 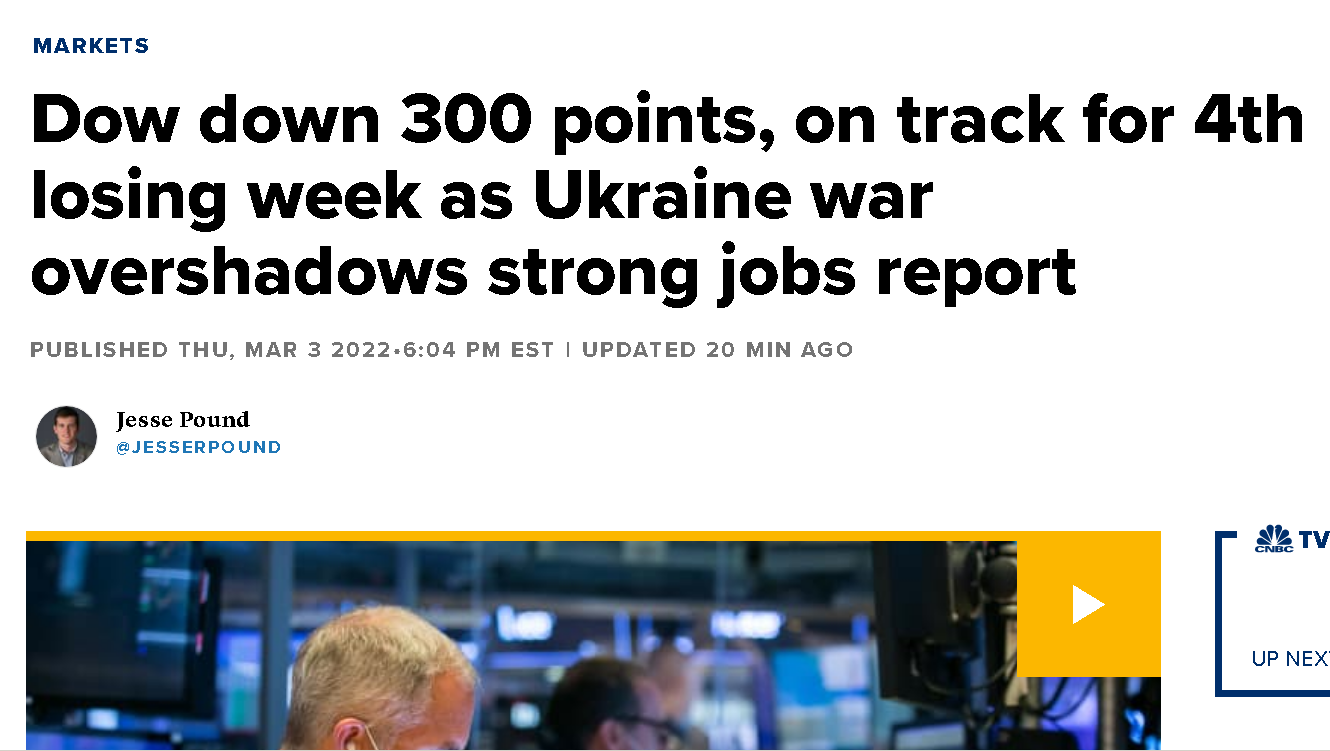 Currently, we’re experiencing what could be described as headline-driven volatility. Sure, the specter of rising interest rates has been a contributing factor, but the headlines are now dominated by the Russia-Ukraine crisis.

Again, the job of the media is to sell fear to the public for maximum effect. Originally, the headlines stated that smoke was visible from a nuclear power plant in Ukraine – implying that this might be a Chernobyl-like meltdown, or even the start of a nuclear war.

Later, it was reported that there are no indications of radiation leaking, according to a senior U.S. Defense Department official. That headline was buried, of course, since it’s much less exciting and frightening than the Chernobyl threat.

Yet, not everyone is panicking now. Larry Adam, chief investment officer for the Private Client Group at Raymond James, observed that in the wake of geopolitical events, stocks have tended to bounce back relatively quickly.

Indeed, dating back to 1990, through everything from terrorist attacks to the start of wars, stocks rallied 4.6% on average in the six months following such crises, and rose 81% of the time. “In general, Fed policy and economic conditions tend be the more long-term drivers of the economy and financial markets rather than isolated geopolitical events,” Adam commented. 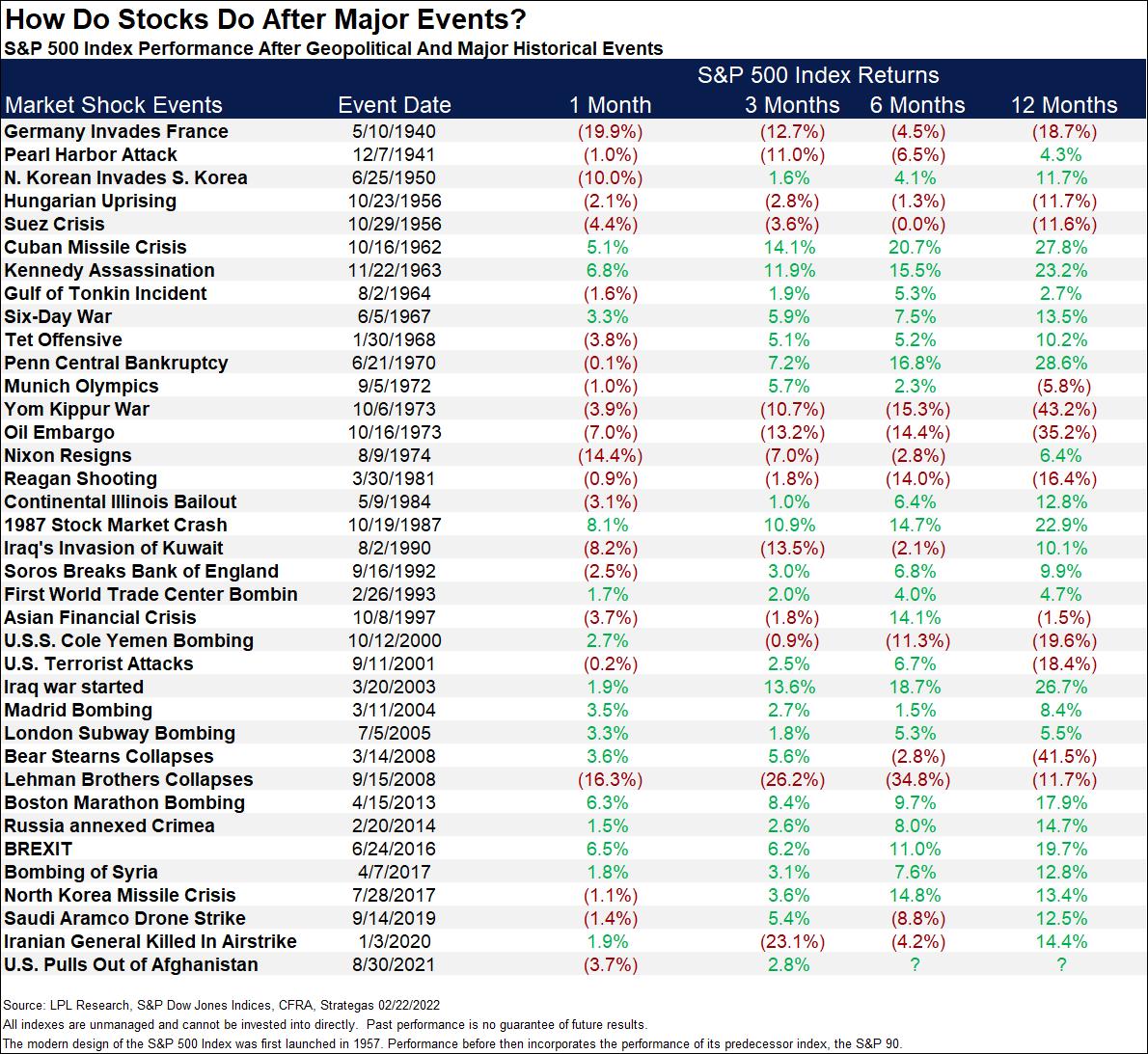 Meanwhile, LPL Research has compiled the post-crisis stock-market results going all the way back to 1940. It’s a mixed bag of outcomes, admittedly. Still, as Ryan Detrick succinctly put it, “Bottom line is if there isn’t a recession, stocks tend to take most in stride.”

Glenview Trust Co. Chief Investment Officer Bill Stone similarly noted that stock declines associated with geopolitical fears are generally “a temporary setback and an opportunity to buy at discounted prices,” and cautioned that “getting out of the market could have significant opportunity costs.”

Or, in the words of Genevieve Roch-Decter, “Remember, excellent buying opportunities never feel good at the time.” With that, she reminded us to buy when there’s blood in the streets – but are we actually taking this advice to heart?

As usual, the way forward is best understood when we look backward. History shows that contrarian investing wins in the long run, even if your timing is less than perfect. This won’t be the last crisis you’ll encounter in your lifetime – or the last time the media tries to shake you out of a perfectly good investment.