DRAINING THE RESERVES: War on Oil

DRAINING THE RESERVES: Slippery Slope in Biden’s War on Oil!

Let there be no mistakes or misconceptions: everything that politicians do is political, and there are no coincidences on Capitol Hill. The same is true of the White House, where the commander-in-chief is just now trying to fix the grave policy mistakes of the past two years.

This isn’t to suggest that the mistake of discouraging domestic oil, natural gas, coal, and nuclear energy production was unintentional. On the contrary, it was a willful and entirely deliberate attempt to promote a very specific agenda.

Remember how quickly the whole “Green New Deal” came and went? That was scrapped as not only unpopular but also unworkable and wrongheaded, but they did manage to appease some special interests with the so-called “Inflation Reduction Act,” which will have the completely opposite effect of what its name implies.

Now, Joe Biden has to deal with a midterm election that could shift the balance of power in Congress and make his final two years in office completely ineffectual. Again, there are no coincidences here since Biden is once again depleting what’s left of America’s Strategic Petroleum Reserve. 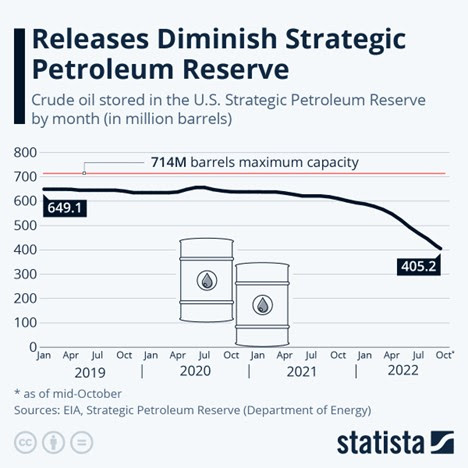 This is only supposed to be done during emergencies, not for political expediency. This is Biden’s second time tapping the Strategic Petroleum Reserve within just a few months, and this time he’s drawing an additional 15 million barrels of crude oil per day.

It’s a bizarre and desperate move right before the November elections – and it wouldn’t have been necessary if the current administration had been more sensible about America’s energy policy from day one. The U.S. has more readily recoverable oil and gas in the ground than any other nation – particularly in Texas, Oklahoma, Louisiana, Pennsylvania, the Dakotas, and Alaska – but drillers can’t effectively drill due to oppressive regulations and financial burdens.

Still, Biden will point fingers and talk about “Putin’s price hike” as November draws near. Of course, continuing to tap the Strategic Petroleum Reserve is an unsustainable course of action, but there may be a larger, more insidious plan at work here.

Perhaps Biden is actually trying to destabilize the economy, which would reduce demand for oil and natural gas since people wouldn’t be able to afford it anymore. Then he could fulfill his fever dream of everything running on windmills and solar panels.

Or, the much more likely outcome would be a painful recession and sky-high gas prices, much like what happened in 2008-2009 and, going back even further, in the 1970s. Biden might not get what he wants if there’s a big enough shift in Congress, but right now he seems hellbent on punishing oil companies for perceived wrongs and forcing U.S. citizens and businesses to go green or else.

It’s not great for America, but there is an opportunity for investors here. Energy companies aren’t going away within our lifetimes. They don’t have a friend in the White House now, but modern civilization can’t do without fossil fuels despite what the radical politicians might say.

Energy makes our modern way of life possible, and it would take decades and many billions of dollars to transition an entire nation away from fossil fuels. Heck, there isn’t enough easily accessible copper, lithium, silver, and other commodities to transition away from oil and natural gas in the coming years.

So, don’t get caught sleeping if and when energy stocks correct to the downside. It will be a huge buy-the-dip opportunity since the oil war will have no real winners except for investors who positioned themselves to capture the upside amid an eventual return to sanity.