On Friday, June 03, Tesla stock was trending on social media, but not for anything positive. The share price slid 9.22% in a single trading session, nearly reaching $700 even though the stock was worth $1,150 just a couple of months earlier.

There was no earnings report or other data release on that day. Rather, it was just another instance of CEO Elon Musk expressing his viewpoints, which sometimes results in asset prices making outsized moves.

Reportedly, in an e-mail to executives seen by Reuters, Musk stated that he has a “super bad feeling” about the economy. Moreover, Musk wrote that he needs to cut about 10% of the jobs at Tesla.

According to Tesla’s annual SEC filing, the company and its subsidiaries employed almost 100,000 people at the end of 2021. So, we might be looking at 10,000 folks being furloughed or laid off in the near future due to Musk’s concerns over the fate of the economy.

The company’s workers might be feeling a bit shell-shocked right about now, as just two days earlier, Musk had ordered Tesla staff to return to the workplace or leave. Was this a ploy to get some employees to quit voluntarily? Only Musk knows the answer to that.

The body of the e-mail message, titled “Headcount Reduction,” states: “Tesla will be reducing salaried headcount by 10% as we have become overstaffed in many areas. Note this does not apply to anyone actually building cars, battery packs or installing solar. Hourly headcount will increase.”

So, some staffers will apparently be spared. One can only wonder which “areas” of Tesla are “overstaffed” in Musk’s estimation.

In the wake of Musk’s message to his workers, financial market traders unceremoniously dumped their Tesla shares. It was so bad that the Tesla stock rout contributed to the NASDAQ falling around 2.5% that day.

Most likely, NASDAQ traders weren’t specifically responding to Musk’s “super bad feeling” about the economy. Sure, Musk has influence over the Tesla share price as well as certain cryptocurrencies, but his opinions on macro-level economic conditions probably don’t hold much weight on Wall Street.

However, Tesla stock is a major component of the NASDAQ index. If Tesla, Apple, Microsoft, Alphabet/Google, Amazon, or Facebook stock falls hard, tech-sector investors can get spooked and hastily unload their shares.

What’s interesting is that layoffs are sometimes cheered on Wall Street as they entail cost cutting, which can contribute to a company’s bottom line. Nevertheless, Musk’s warning of a 10% workforce reduction put investors in a sour mood as is may signal company-specific problems at Tesla, even though Musk cited broader economic headwinds.

In contrast to investors’ risk-off mood, President Biden evidently shrugged off Musk’s concerns about the economy. “Lots of luck on his trip to the moon,” Biden said, referring to the SpaceX founder.

“Well, let me tell you, while Elon Musk is talking about that, Ford is increasing their investment overwhelmingly,” Biden argued. “I think Ford is increasing investment in building new electric vehicles, 6,000 new employees – union employees, I might add – in the Midwest,” he continued, adding that “the former Chrysler corporation, Stellantis, they are also making similar investments in electric vehicles.” 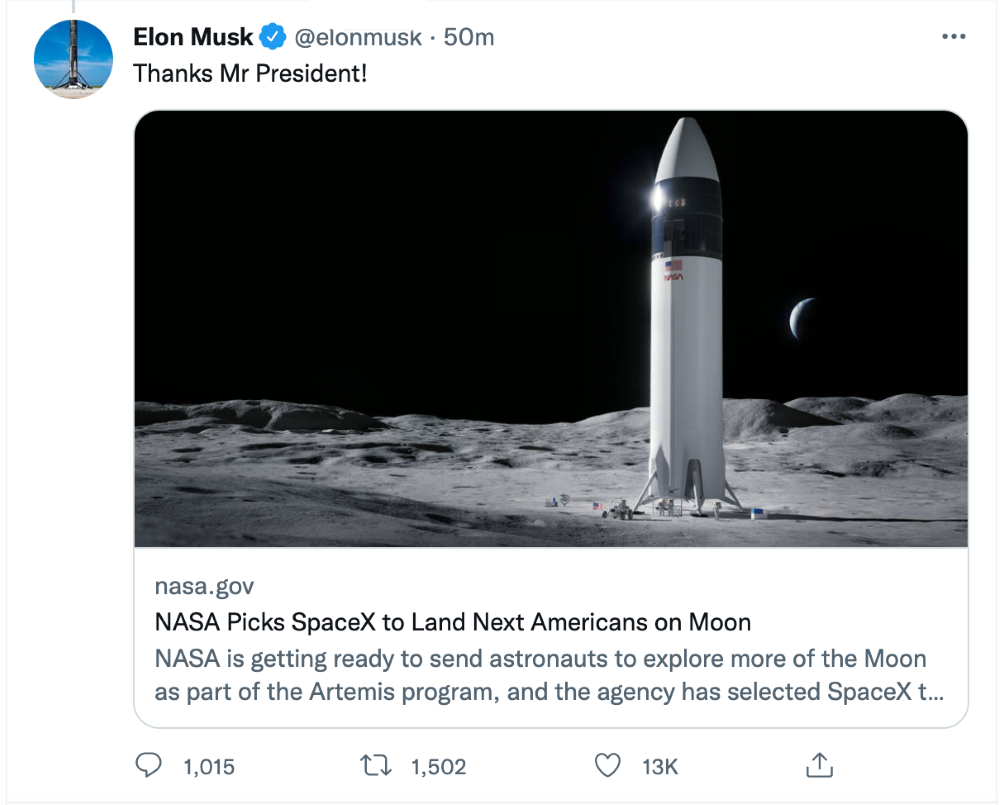 Just minutes later, Musk tweeted, “Thanks Mr. President!” along with an April 2021 press release from NASA announcing that SpaceX had been selected to land the next Americans on the moon. Thus, the petty quarrel continues.

Of course, Ford and Stellantis making investments in electric vehicles doesn’t mean that the U.S. economy is actually in good shape now, any more than Musk’s concern means that it’s in bad shape. What we can say for certain is that inflation won’t subside quickly, and its impact is broad, deep, and devastating.

Even Cleveland Fed President Loretta Mester recently admitted that she doesn’t see enough evidence that inflation has peaked. As a result, she’s on board with supporting multiple interest rate increases.

The stock market doesn’t like multiple interest rate hikes, so a hard landing is likely the only type of landing we’ll get this year. Meanwhile, expect more corporate executives to get a “super bad feeling” and cut their workforces before the year is over – another sign that decades of central bank policy errors are having a terrible, terrifying impact now.