Finger pointing, crushing debt, and a financial giant that wasn’t supposed to fail – does this sound familiar? No, I’m not talking about Lehman Bros. or Bear Stearns in 2008. It’s a hugely important Chinese property firm, and it’s failing famously.

Until a few weeks ago, most people in the United States had never heard of Evergrande. I suppose you could say the same thing about DiDi, Tal Education, and New Oriental Education – and look at where those stocks are now.

Evergrande is much bigger than those companies, however. Listed in Hong Kong and based in the southern Chinese city of Shenzhen, Evergrande is a real estate developer that’s part of the Global 500, which includes the world’s biggest businesses by revenue.

The company employs around 200,000 people. However, it also indirectly helps sustain more than 3.8 million jobs each year.

Founded by Chinese billionaire Xu Jiayin, Evergrande owns more than 1,300 projects in more than 280 cities across China. Moreover, the company has invested in electric vehicles, sports and theme parks, as well as a food and beverage business.

With big spending, however, comes big problems sooner or later. Evergrande is infamous for being China’s most indebted developer, with more than $300 billion worth of liabilities.

On top of all that, Evergrande recently warned its investors of cash flow issues, saying that it could default if the company is unable to raise money quickly.

Additionally, Evergrande revealed in a stock exchange filing that it was having trouble finding buyers for some of its assets. The company has “strayed far from its core business, which is part of how it got into this mess,” according to Mattie Bekink, China director of the Economist Intelligence Unit. 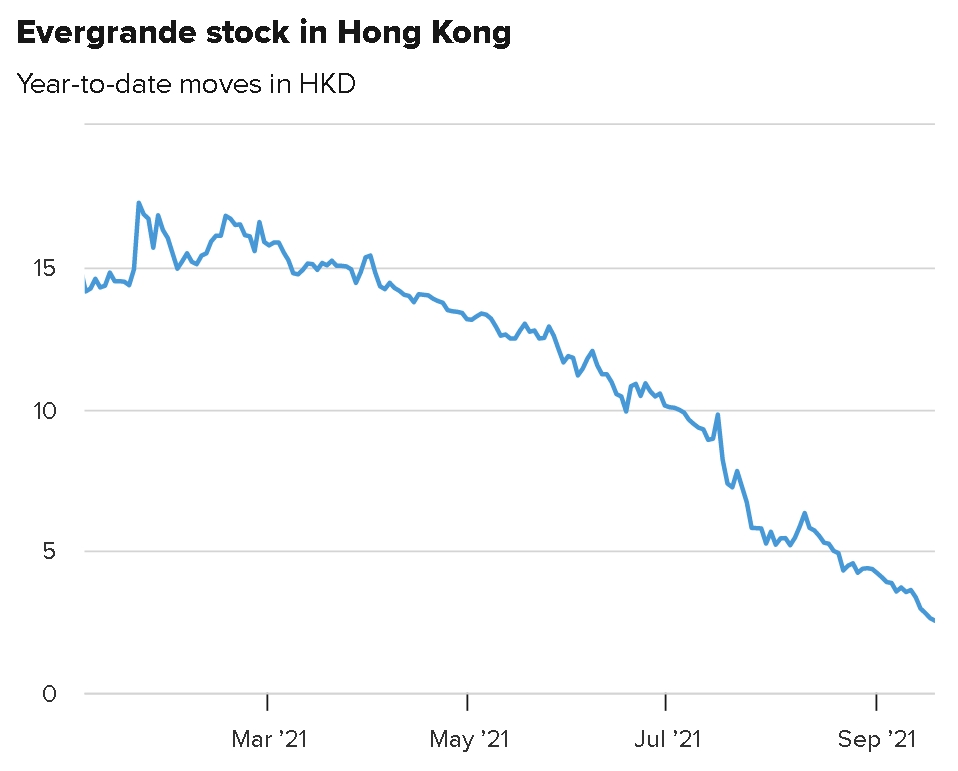 Amazingly, Evergrande stock shares are down 80% this year so far. The share price slumped 5.4% on September 15 after China’s Ministry of Housing and Urban-Rural Development told banks that Evergrande won’t be able to pay its debt obligations due September 20.

Now, you might be thinking that Evergrande is “too big to fail,” meaning that surely China’s government will swoop in and save the day with financial support. After all, the U.S. government did that with our big banks in 2008, right?

Don’t be so sure. The editor of China’s flagship state-owned newspaper actually said that Evergrande shouldn’t expect a government bailout on the assumption that it’s “too big to fail.”

This isn’t to say that the Chinese government will sit by idly while the financial markets burn. Notably, China’s central bank has just injected 90 billion yuan ($14 billion) into the country’s banking system in order to avert an immediate crisis.

Yet, that’s really just a small bandage on a gaping wound. To quote Mark Williams, chief Asia economist at Capital Economics, “Evergrande’s collapse would be the biggest test that China’s financial system has faced in years.” 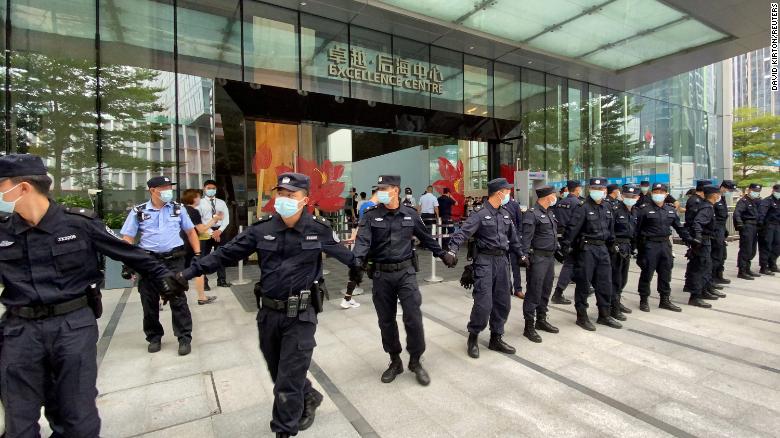 What you’re seeing in the photo above is emblematic of how dire the situation has become. It’s a human chain of security personnel guarding Evergrande’s headquarters, where people gathered to demand repayment of loans and financial products.

Just recently, Evergrande disclosed that it had made “no material progress” in its search for investors to buy part of its stakes in the company’s electric vehicle and property services businesses.

“If the group is unable to meet its guarantee obligation or to repay any debt when due or agree with the relevant creditors on extensions of such debts or alternative agreements, it may lead to cross-default,” the company warned.

Furthermore, Evergrande announced in a stock exchange filing in Hong Kong that it had enlisted financial advisers to “evaluate the liquidity of the group and explore all feasible solutions” as quickly as possible.

Of course we all know what “liquidity” and “exploring feasible solutions” mean. It’s corporate-speak for bankruptcy in the near future, and total capitulation for the unfortunate shareholders.

Sometimes when stocks representing giant companies go down a lot, my contrarian personality tells me to buy some shares because the crisis will probably pass, and the stock will go back up.

I’m not getting that feeling with Evergrande. This is more like a disease than an opportunity, and we can add it to the already lengthy list of black swans which could potentially tank the markets – here, there, and everywhere.