Touching the $20,000 mark in late 2017 was an exhilarating milestone for Bitcoin investors, but the market wasn’t yet ready to maintain that price level. Three years later, the market is more than ready to push Bitcoin past $20K and $25K, but that could be just the beginning.

Not every retail trader sees it now, but big bank J.P. Morgan is evidently bracing for the Bitcoin price to surpass the half-million-dollar mark. It’s quite a turnaround in sentiment as the major banks once dismissed cryptocurrency, yet now they have no choice but to take it seriously.

And so, in J.P. Morgan’s recent “Flows and Liquidity” report, quantitative analyst Nikolaos Panigirtzoglou put forth arguments and calculations which suggest that the Bitcoin price should reach $650,000.

At first glance, that might sound like a far-fetched price target. Yet, let’s do the math here. The Bitcoin price was less than a penny at one point in time. Analysts at Crush the Street were covering and recommending Bitcoin when it was in the hundreds of dollars.

With the year coming to a close, Bitcoin is touching $24,000 and that represents a gain of thousands of percentage points. Thus, at the current trajectory, a price target of half a million dollars or more is not at all unreasonable. 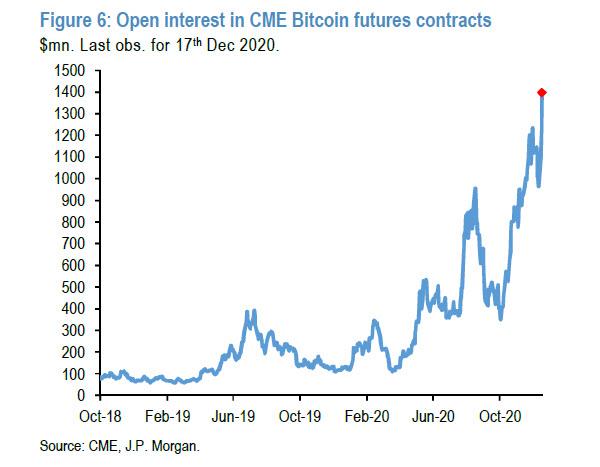 To support its lofty price target for Bitcoin, J.P. Morgan cites the recent surge of open interest in Bitcoin futures contracts. Amazingly, the level of open interest has entirely reversed the previous decline of November 25 and posted a new record high of $1.4 billion.

You might have already heard about big-money funds like Guggenheim and MassMutual getting into Bitcoin and related assets. Or, perhaps you’ve read about PayPal and Square enhancing their payment and transaction platforms (including Square’s popular Cash App) with Bitcoin functionalities.

What’s going on here? Why would the old, traditional MassMutual life insurance invest $100 million in Bitcoin for its general investment fund? Clearly, the adoption and mainstreaming of cryptocurrency is under way as smart-money funds come to grips with the fact that the U.S. dollar is deteriorating and Bitcoin is here to stay.

And J.P. Morgan isn’t the only banking giant to establish a high price target for Bitcoin. In fact, CitiBank’s Thomas Fitzpatrick set a target of $318,000 for Bitcoin by December of 2021. In doing so, Fitzpatrick drew a comparison between modern-day Bitcoin and the gold market of the 1970’s.

It’s actually an apt comparison. Gold was stuck in a range between $20 and $35 for 50 years before a breakout occurred when the U.S. government took the dollar off of the gold standard in 1971. The result was the crippling inflation of the 1970’s, along with gold reaching all-time highs multiple times. 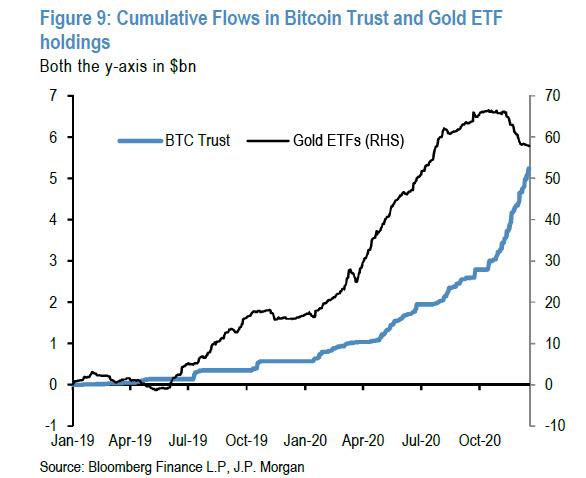 Some folks have called Bitcoin “digital gold,” and the comparison might not be perfect, but the dollar’s degradation has certainly benefited both asset classes. Inflows into Bitcoin and gold will very likely persist in 2021 as funds of all sizes seek to avoid the hazards of holding cash for long periods of time.

Analyst Max Keiser summed up the bullish thesis on Bitcoin when he said that Bitcoin is an asymmetric, one-way bet that “virtually has no top” because central banks will continue to keep interest rates low in the coming years.

Indeed, with bond yields low and inflation running hot, the value proposition of anti-fiat assets is undeniable. And while Bitcoin might be considered the people’s currency, it’s the buy-in from the major financial institutions that could send the Bitcoin price much higher.

Bitcoin and gold both had a terrific year, but 2020 really was just a launching pad for inflation-resistant asset classes. It doesn’t matter whether J.P. Morgan’s exact price target is right or wrong – the important thing is that the big money’s backing Bitcoin now, so the only direction from here is up.