Crush the Street has been on top of the story for years, but now an investing magnate is chiming in on the Federal Reserve’s disconnect from fundamental economic realities – and what could be the U.S. dollar’s last gasp as the world’s reserve currency.

Stanley Druckenmiller, the chairman and CEO of Duquesne Family Office, did not mince words in his recent commentary as he ratcheted up his criticism of a central bank that refuses to let up on the fiscal accelerator pedal.

Undoubtedly referring to Chairman Jerome Powell and other members of the FOMC, Druckenmiller called the current policy regime “certainly the most radical policy by a long shot” that he had ever seen.

Even as America’s GDP and retail sales figures normalize, Federal Reserve policy remains as accommodative as ever – meaning, the Fed is continuing to keep government bond yields ultra-low while letting inflation run hot even when it’s not necessary.

“I can’t find any period in history where monetary and fiscal policy were this out of step with the economic circumstances – not one,” continued Druckenmiller in his scathing commentary.

The chart shown above, which comes from the Fed itself, bolsters Druckenmiller’s point. If the onset of the Covid-10 pandemic was an excuse for the Federal Reserve to ramp up its pace of asset purchases, that excuse is wearing thin and the Fed’s policy hasn’t adapted to changing circumstances.

The math is unsettling: in six weeks last spring, the Fed purchased more Treasurys than it had done during the nine-year period from 2009 to 2018.

Now, the Federal Reserve is expected to conduct $2.5 trillion of quantitative easing, even after Covid-19 vaccine confirmation and after retail sales are back to normal. In light of all this, Druckenmiller rightfully called the current Fed policy “totally inappropriate.”

Now, Druckenmiller is reaffirming his thesis that the dollar is about to lose its status as the world’s reserve currency. At the core of his concerns is America’s mounting debt level: 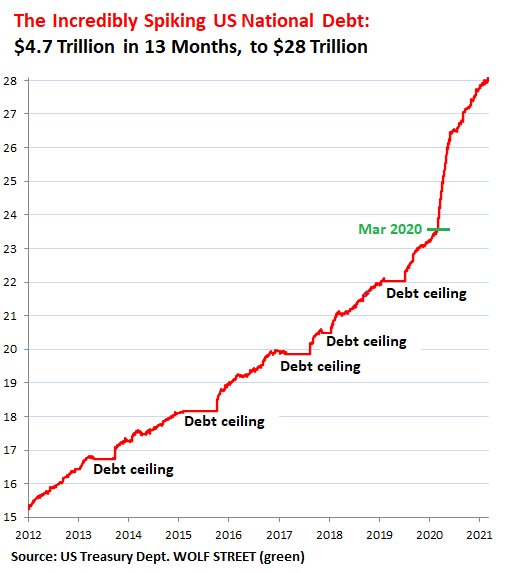 Debt ceilings have become meaningless, and even more so in the wake of the Covid-19 pandemic as cranked-up spending policies have added $4.7 trillion to America’s national debt in 13 months, now putting the total at a whopping $23 trillion.

As Druckenmiller points out, the federal government will have to pay interest on this massive debt load. Down the road, “the interest expense alone will be close to 30% of GDP every year,” Druckenmiller predicts.

“That’s basically what we just spent on the Covid emergency in the last year,” he added. “There is no way we can afford to have 30% of all government outlays be toward interest expense, so what will happen is the Fed will have to monetize that.”

It’s ultimate manifestation of the globalists taking full control of the monetary system – and naturally, the middle class will be financially enslaved and indebted to the government as consumers’ purchasing power dwindles to nothing.

“It will have horrible implications for the dollar… It’s more likely than not, within 15 years we lose reserve currency status.”

Druckenmiller couldn’t be any clearer than that. The dollar’s days are numbered – and 15 years might sound like a long time, but the deterioration in the years leading up to the dollar’s final collapse will be acutely painful.

Expect more influencers in the realm of finance to sound the alarm bells on the dollar’s inevitable demise – but don’t expect the government to listen and take action, until it’s too late.