Complaints about rampant inflation are common and understandable, but not new by any means. Echoes of today’s dollar woes can be heard throughout history, and Rome’s millennia-old experiment provides a snapshot of how print-and-spend policy can ruin even the most powerful empire’s economy.

2,000+ years ago, Rome was much more powerful than the U.S. is today. America in the 2020’s has strong economic competition from China, and must be cautious with a nuclear power like Russia. In contrast, the Roman Empire had no real competition or threats, except from its own leadership.

Interestingly, ancient Rome will always be a footnote in the history of money as it produced the oldest known example of a widely used fiat currency, the Denarius. Surely, it’s not happenstance that the literal decline of Western civilization coincided with the dilution of Rome’s money:

Why would the Roman Emperors allow this to happen? It’s simple: they figured out that by cutting the silver used in each coin, they could create more coins and, at least temporarily, end up with more “money.” Thus, if a Denarius went from 100% silver composition to 50%, they could make double the coins using the same amount of silver.

Throughout 500 years of the Roman Empire, the value of the Denarius declined in proportion to its silver content, until Rome itself ceased to exist and so did its currency. Today, we can shake our heads and wonder how such a powerful nation could allow itself to fall into ruin that way – or, we can consider the parallels to the dollar’s tragic decline.

I’ve actually had the bittersweet firsthand experience of traveling in Europe and seeing modern Rome: the beauty and the turmoil, the rich history that devolved into an economic and political shell of a nation which was once so dominant and confident. 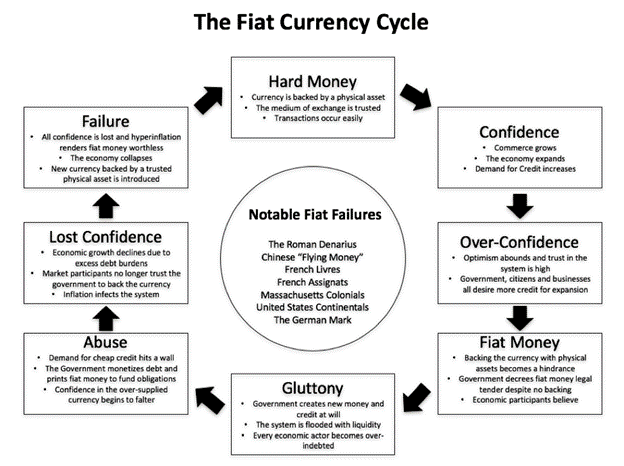 Sadly, we’re all bearing witness to history repeating itself. Surely, it seemed like a good idea at the time when the U.S. government decoupled the dollar from gold in 1971 and put it on the fiat standard. With that, the government was free to print and spend the currency at will, and gold has maintained its value while the dollar has deteriorated relentlessly.

There is at least one crucial difference today, though. In the days of Ancient Rome, there was more of an uncorrelated dynamic across the different nations; the economy wasn’t as globalized as it is today. In contrast, the supply chains of the 2020’s are transnational; Russia reducing the flow of oil, natural gas, and grains has shown how interdependent nations are nowadays.