First FexEx, Then CarMax. Who’s Next?

Is bad news good news now, or is it just bad? It’s harder than ever to navigate today’s markets as the Federal Reserve engineers an economic slowdown and vulnerable businesses capitulate – yet, the career politicians refuse to acknowledge that we’re actually in a recession.

The FedEx boss didn’t hesitate to predict a recession, not just for the U.S. but globally. As you may recall, the package delivery company is shutting down locations and sending workers home after posting disappointing second-quarter financial results.

It wasn’t just about one company’s problems, though, as FedEx’s CEO acknowledged, “We are a reflection of everybody else’s business, especially the high-value economy in the world.” This is certainly true because, if packages aren’t being delivered due to diminishing demand and supply-chain disruptions, that’s a telltale sign of a failing economy.

Just a couple of weeks later, CarMax dropped an equally loud bombshell with a quarterly report that could only be described as dismal. During fiscal-year 2023’s second quarter, the online used car buying platform sold 6.4% fewer cars than it did in the year-earlier quarter.

That wasn’t even the worst part of the report, however. In that same quarter, CarMax generated $8.1 billion in revenue, missing the analyst consensus estimate of $8.5 billion. Worse yet, the company recorded EPS of $0.79, a wide miss compared to Wall Street’s estimate of $1.39.

How did this happen? The main culprit, just like with FedEx, is elevated inflation. In CarMax’s case, the company’s selling, general and administrative expenses increased 16% year over year to $666 million.

Indeed, it’s the “climbing interest rates” that are foundational to the havoc that’s being wreaked in the economy and markets today. The government created inflation by printing and spending vast sums of fiat money during the COVID-19 crisis, and now the Federal Reserve is orchestrating an economic downturn in order to get the inflation genie back into the bottle.

It’s doubtful that the Fed will actually achieve this, however, as Fed Chairman Jerome Powell’s strategy isn’t exactly going according to plan. As it turns out, the number of Americans filing for jobless benefits actually dropped back below 200,000 last week, to 193,000. This is the lowest reading since April, and below the estimate of 215,000.

It’s certainly not what Powell wanted to see right now if he’s on a quest to slow down the economy in order to combat inflation. Also on the employment front, continuing claims fell 29,000 to 1.347 million, marking the lowest level in three months.

Clearly, Powell’s wrestling match with the economy is taking longer than he had anticipated. To quote Jim Baird, chief investment officer at Plante Moran Financial Advisors, “The capital markets have heard the Fed, and investors are feeling the pain. But the jobs market? For now at least, it’s not listening.” 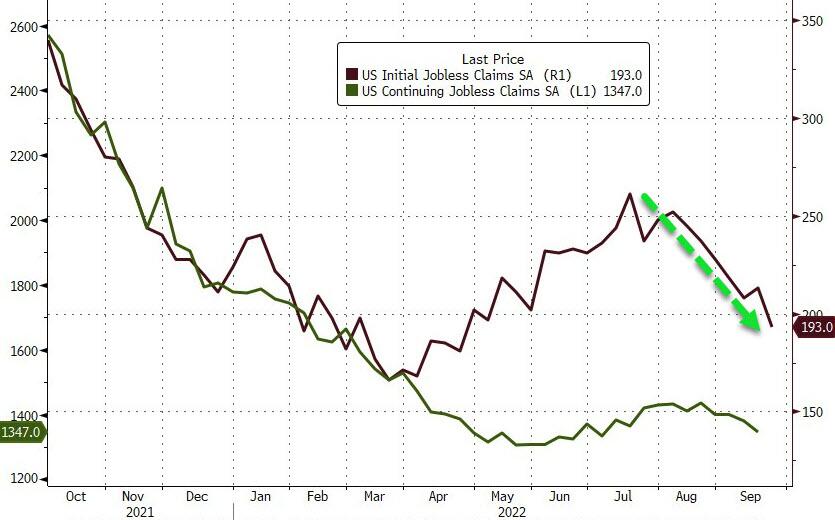 The unfortunate net effect of all this is, most likely, interest rate hikes that are deeper and last longer. It shouldn’t be too surprising, then, that it wasn’t just CarMax stock that tumbled as the entire stock market declined sharply on September 29.

If there’s any silver lining to be found here, it’s that used vehicle prices are rolling over. That’s not necessarily great news for CarMax, but at least middle-class consumers who can’t afford a new car will have some bargaining power when shopping for a used vehicle.

That’s not much of a consolation prize, though, as the prices of so many essential goods remain outlandishly high. It’s practically inevitable at this point that the U.S. will print a third consecutive quarter of negative GDP growth, meaning that politicians will have a tougher time denying that we’re in a recession.

Actually, there is one more silver lining to report – or I should probably call it a gold lining. Amid the turmoil, gold has turned out to be one of 2022’s best performing assets. It just goes to show that tangible assets will prevail sooner or later despite the government’s policy errors, or perhaps even because of them.