The News Is Setting In

As the stock market tests and breaks below the June lows, staggering financial losses feel sudden and painful. Yet, this event was years in the making, the final shoe dropping as one central bank policy error has led to another all to come crashing down at the worst possible time.

We might, at first glance, feel sorry for Powell as he undertakes the unenviable task of containing mountains of stored energy from liquidity injections and easy money. Then again, he’s only unloading billions of dollars of Treasuries that the Federal Reserve recklessly bought in the first place.

He’s also scrambling to raise interest rates after the Fed ruthlessly suppressed them, thereby making it impossible for America’s retirees and savers to get any sort of yield that outpaces inflation. Everyone was forced into stocks and real estate – and now they’re both rolling over. 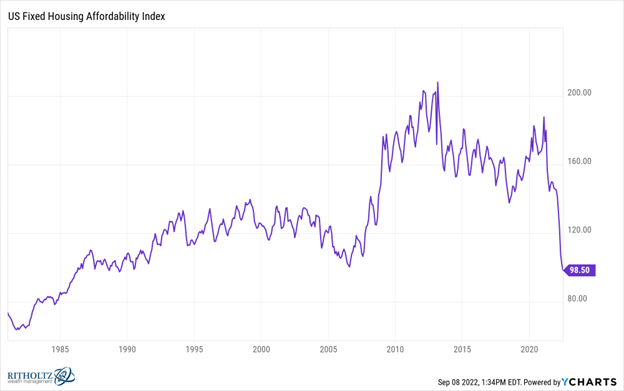 It’s not hard to connect the dots and discover exactly how the “American Dream” of homeownership became a nightmare so quickly in 2022. With the Fed mercilessly raising interest rates, new homes are unaffordable and mortgage loan originations are way, way down this year.

The American housing market rolling over is just one symptom of many as grave errors from the nation’s policymakers take their inevitable toll. We can trace it back to the billions of dollars in bailouts handed to the big banks during the 2008-2009 financial crisis, but it all came to a head after the U.S. government printed up more dollars in 2020-2021 than it had in the prior decade.

It seemed justified at the time as a response to the COVID-19 crisis, but even as the pandemic eventually waned, the money printing and spending continued unabated since career politicians had constituencies to appease – after all, spending money is the only way governments know how to solve a nation’s problems.

Thus, COVID-19 gave the Federal Reserve a perfect excuse to funnel massive quantities of cash into the economy through the banking system via one series of bond purchases after another – quantitative easing (QE), as they like to call it. We warned investors that this would lead to elevated inflation levels sooner than people thought it would, and here we are: inflation is “sticky,” not “transient,” and it’s fine to be shocked, but we really shouldn’t be surprised.

Now, the Fed has painted itself into a corner as it has to reverse course abruptly, switching from QE to quantitative tightening (QT). At the same time, Powell has to hike interest rates again and again until he “gets the job done” (his words), which means getting the annualized U.S. inflation rate down from 8.3% to something in the ballpark of 2%. 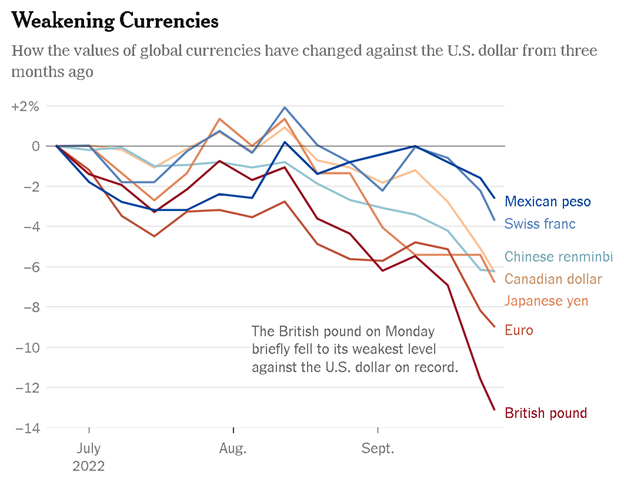 What the Fed’s doing now is creating far-reaching ripple effects. We already touched upon the real estate market, but stocks are also tanking as the U.S. dollar continues to surge. A strengthening dollar might seem counterintuitive during elevated inflation, but it’s basically just gaining against other currencies that are losing value at an even faster pace.

Another knock-on effect of the Fed’s aggressive monetary policy tightening is an abrupt slowdown in corporate earnings. With inflation so high, people aren’t making purchases unless they’re absolutely necessary, and businesses of all sizes are struggling.

It won’t be long now until this slowdown shows up in the data. According to analytic firm Refinitiv, analysts expect third-quarter S&P 500 earnings to increase by just 4.6% year-over-year, which is paltry compared to a growth of 11.1% expected at the start of July.

Despite the fallout, Powell’s been talking tough and wielding his QT sword, and asset prices are tumbling. It’s not just stocks but gold, silver, and Bitcoin as well. The sentiment is decidedly risk-off, with even bond prices crashing as investors pile into the seemingly almighty dollar.

So much for the “soft landing” as the Fed continuously tightens the screws on the nation’s economy, all the while miscalculating the damage they’re causing. On the other hand, Powell and his colleagues won’t continue to choose recession over inflation forever: we fully expect the Fed to pivot back to QE and interest rate suppression – just as they did in late 2018 – upon any signs that the system is actually breaking down.

Remember, this is a midterm election year, and there’s too much at stake to allow anything to break. They have a deadline, and everybody’s watching and waiting. Heads will roll if the Fed doesn’t get it right.

It’s a tough needle to thread, but there’s no stopping what’s already been started now. Just be prepared for a return to easy money policy sooner instead of later, upon which the whole vicious cycle can start all over again.