What I want cryptocurrency investors and HODLers to know, more than anything else, is that short-term price movements are really just noise and are of secondary importance to crypto adoption. Over the long term, adoption is to cryptocurrency like company fundamentals are to stocks: the price will, sooner or later, catch up to what’s going on under the hood.

In the short term, price movements reflect the paint job more than the health of the engine: this is what’s hard for new investors to understand. Many cryptocurrency buyers have been in the market for only a couple of years or less, and made their first trade with an app on their phone, so I’m sympathetic if they don’t have a seasoned investor’s long-term outlook and patience.

Besides, Bitcoin’s slide from nearly $20,000 to $3,200 was a disappointment for some investors and downright scary for others – I can understand that. Bitcoin has had a dozen crashes of 30% or more since its creation in 2009, but this latest one has been deep and drawn out, and much more highly publicized than the previous Bitcoin crashes.

But then, early investors aren’t so concerned about all of that: even BTC at $1000 would be fine for someone who got in when Bitcoin was trading at, say, $100. That’s also the case for pretty much anyone who took an early long position in any of the popular cryptocurrencies that have been around for more than a couple of years: 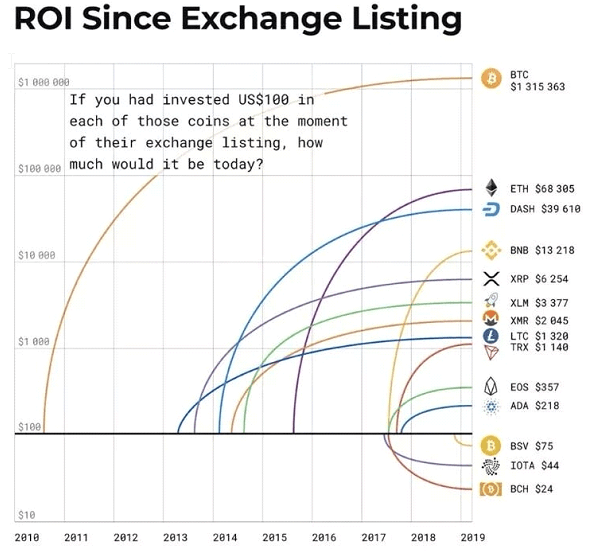 What has driven these cryptocurrency prices to new highs after multiple crashes along the way? It’s not just speculation, because the speculators would have been shaken out after during those crashes. No, it’s cryptocurrency and blockchain adoption that has kept the movement alive and thriving, and there’s no shortage of evidence that adoption is in full swing.

A few mainstream media outlets have mentioned Bakkt, which will bring institutional money into cryptocurrency by providing a Bitcoin futures trading platform owned by the same company that owns the New York Stock Exchange. That’s a big development, to be sure, but there are lots of other encouraging news items which they’re not reporting on.

To begin, we can jet-set over to Switzerland, as that nation’s biggest online retailer has begun accepting cryptocurrency. So basically, the Amazon or Alibaba of Switzerland is now accepting crypto payments. It’s typical that the mainstream media would completely ignore this major development, but the implications are huge in terms of crypto adoption.

Here are the details: in what’s being hailed as a major milestone for Bitcoin adoption, Digitec-Galaxus, which is basically the Amazon of Switzerland, is now accepting Bitcoin and other select cryptocurrencies as a means of payment, including Bitcoin Cash, Bitcoin Cash SV, Ethereum, Ripple, Binance Coin, Litecoin, TRON, OmiseGo, and NEO. 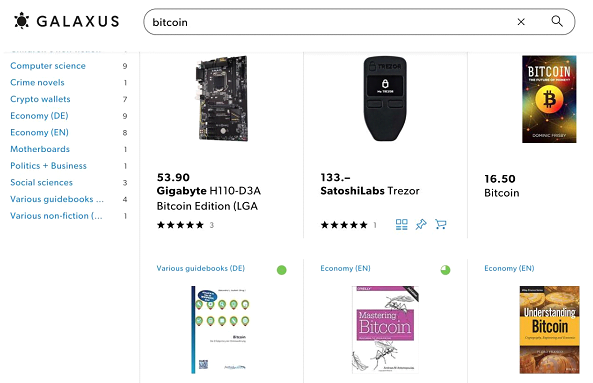 Responding to questions regarding this exciting development, Digitec co-founder and Chief Innovation Officer Oliver Herren stated that “cryptocurrencies are fascinating and could become a relevant means of payment in e-commerce. We would like to support this development.”

Digitec and Galaxus have made the process of cryptocurrency payment quite simple and convenient: at checkout, the customer will choose the payment option “cryptocurrencies.” Then, they will be redirected to the Coinify website, where the specific crypto coin (Bitcoin, Ethereum, etc.) is selected.

Speaking of cryptocurrency payments, the popular U.S.-based payment service Square is, according to a tweet from CEO Jack Dorsey, hiring cryptocurrency engineers and a crypto ecosystem designer, and is offering to pay them in Bitcoin.

Dorsey’s tweet proudly proclaims, “Square is hiring 3-4 crypto engineers and 1 designer to work full-time on open source contributions to the bitcoin/crypto ecosystem. Work from anywhere, report directly to me, and we can even pay you in bitcoin!” 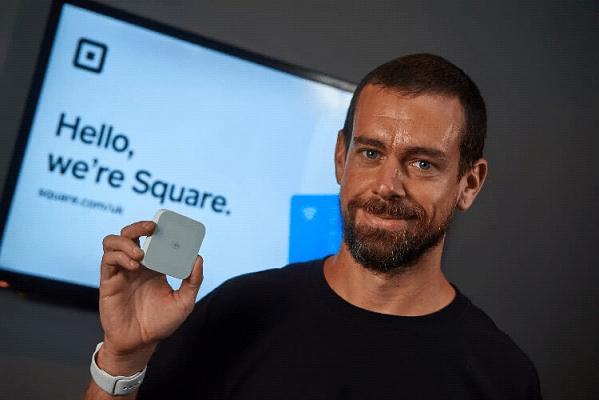 It seems that there’s no shortage of tech-savvy companies getting into the crypto space. Not long ago, Fortune 500 tech firm Avnet announced that they will allow their customers to pay in Bitcoin and Bitcoin Cash for the company’s software solutions. Avnet will be working with industry leader BitPay, which processes over $1 billion annually in cryptocurrency payments, to facilitate the new payment option.

Avent is eager to commence offering cryptocurrency payment options, with the company explaining that “today’s developers are looking for flexibility as they take their products to market, and this announcement provides our customers with more convenient ways to complete their financial transactions.”

Moreover, as BitPay Chief Commercial Officer Sonny Singh explains, “Not only is paying with Bitcoin easier and faster than with credit cards and bank wires, it is less expensive and acceptance of it is growing. I predict Avnet will attract many new blockchain-focused customers from around the world that want to take advantage of paying with Bitcoin.” 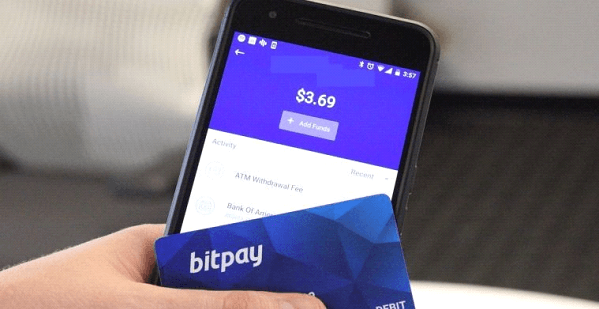 Speaking of Fortune 500 companies, IBM has recently made a move to into cryptocurrency-based cross-border payments with the announcement that IBM’s crypto-based global payments network, Blockchain World Wire, will support instantaneous foreign exchange payment and settlement in more than 70 countries, supporting close to 50 currencies.

Much like JPMorgan Chase & Co.’s digital currency JPM Coin, which is intended to service institutional clients in the “business-to-business money movement flows,” IBM’s Blockchain World Wire will focus on regulated financial institutions and will facilitate the digital settlement of funds for these institutions.

Given IBM’s vast resources, Blockchain World Wire has the potential to be a game changer for digital capital technology. Jesse Lund, the global vice president of IBM Blockchain, said the payment information will reach its end location in three to five seconds, and settlement of funds will take between 20 and 30 seconds; Lund also expects that “we can substantially lower operating costs for all participants.”

Shifting our attention to America’s neighbor to the north, The Ontario, Canada town of Innisfil is now running a pilot program which will enable residents to pay their property taxes with cryptocurrency. The program will start with Bitcoin payments and may extend support to other cryptocurrencies, including Ethereum, Litecoin, Bitcoin Cash, and Ripple, at a later date.

This may be a first in terms of property taxes, though not in terms of cryptocurrency tax payment generally: the U.S. state of Ohio took the lead in that respect when it became the first to allow businesses to pay taxes using Bitcoin. In fact, businesses in that state are allowed to pay 23 different taxes with Bitcoin through an online portal that was set up by Ohio’s treasury office. 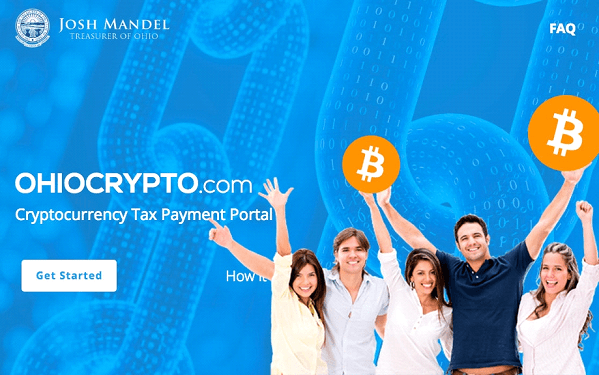 And finally, I’d like to pass on the news that WhatsApp, the most popular messaging app in the world, is releasing a cryptocurrency wallet called Wuabit. The wallet, which is scheduled for beta testing this month, will be accessible via a chat interface in WhatsApp, whereby users can simply type in commands like “send 0.05BTC to Vera” and Wuabit will send the cash.

As a spokesman has duly noted, “crypto payments via WhatsApp can introduce greater numbers of new users who only know how to chat to this complicated space.” Crypto adoption will also likely be helped by reports that an upcoming Samsung smartphone will have a cryptocurrency wallet, as well as rumors that Facebook is creating its own coin.

I could keep going, but I think I’ve built a fairly airtight case that cryptocurrency and blockchain adoption is gaining momentum on both the retail and institutional fronts. If nothing else, the preponderance of the evidence should motivate investors and HODLers to maintain their positions and their enthusiasm for what’s likely to be the 21st century’s most important financial innovation.