House Burning Down: Existing-home Sales Have Declined for 6 Straight Months

Lower sales and increased inventory have produced a startling trend in the housing market: sales of existing homes have declined for six consecutive months. Not only that, but existing-home sales have slumped to a near-three-year low. It’s the crashing market that practically no one in the mainstream press is talking about, but the impact is very likely to spill over into other sectors. 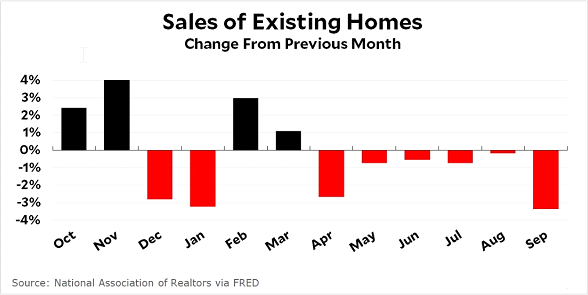 Courtesy of the National Association of Realtors via FRED, motherjones.com

In a previously overheated market, the trend for the past half-year has been a sharp decrease in foot traffic, i.e., serious buyers in the existing-home market. At the same time, mortgage rates have risen in the past year as they quickly approach the key 5% level; many analysts consider this level to be a threshold that will deter people from buying homes.

September’s horrendous numbers are a shock to a market that breathed a sigh of relief in August, when existing-home sales were nearly flat – nothing to write home about, but at least not deep red.

When the figures for September were released, they were a real kicker: analysts had projected that U.S. existing-home would show a month-over-month decrease of 0.9% September, which might sound dismal but that actually turned out to be optimistic. When the data from August was revised lower, the data for September ended up much worse than expected: a -3.4% change month-over-month, the worst drop since February of 2016.

According to the National Association of Realtors, U.S. existing-home sales ran at a seasonally adjusted annual rate of 5.15 million in September – the lowest pace of sales since November 2015. The annualized figures aren’t any better, with existing-home sales being 4.1% lower than year-ago levels.

No matter how you slice it, the numbers are abysmal in the housing market. Sales of national homes, single-family homes, and even condos and co-ops have slid:

Courtesy of the National Association of Realtors

Oblivious to the problem, the real-estate market continues to jack up home prices, with the median sale price of a home in the U.S. in September up to $258,100 – 4.2% higher than a year earlier. Home prices are growing faster than wages in the United States; thus the growing disconnect between market forces and consumer needs has priced thousands of prospective home buyers out of the market.

The National Association of Realtor’s chief economist, Lawrence Yun, blames rising interest rates for the drastic decline in home sales across all regions of the country. Furthermore, Yun notes that “a decade’s high mortgage rates are preventing consumers from making quick decisions on home purchases. All the while, affordable home listings remain low, continuing to spur underperforming sales activity across the country.”

Yun also points out that September marked another month of rising inventory on a year-over-year basis; thus, we have a fatal combination of oversupply, overpricing, and low demand. Should it really be a surprise to anyone that millennials are choosing to rent instead of buy, or that people in multiple demographic segments are waiting longer to buy homes? 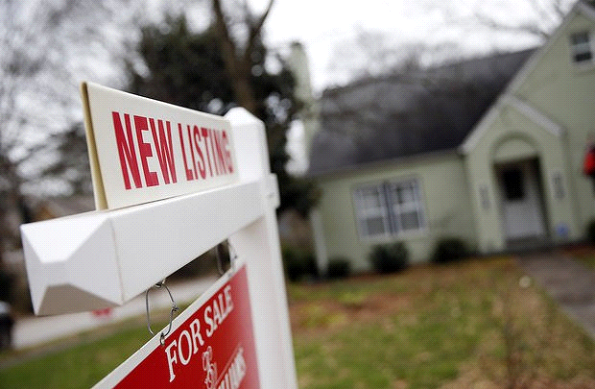 As prices and supply go up and prospective buyers drop out, some investors might think there’s nowhere to go from here but up. Before you consider jumping in, just remember that until the underlying problems get fixed, there’s always room for soft data to get even softer.