How to Invest in Electric Vehicles Now

Chances are pretty good that you heard about the recent 5-for-1 split in Tesla (TSLA) stock. Even prior to the stock split, Tesla was generating a whole lot of buzz in the financial press as the share price only took a few months to soar from $500 to over $2,000.

After the share-price split, the fervor for Tesla stock only accelerated as suddenly amateur traders could now afford to own the shares. Never mind the fact that they could easily have purchased fractional shares through a number of brokers. All that mattered was that the stock seemed cheaper now.

But there’s more to the mania than just one company. Sure, Tesla started the electric vehicle craze, but it’s not the only competitor in the market. In fact, with some digging and due diligence you might find that there are better ways to invest in electric vehicles.

For one thing, consider that Tesla stock has a trailing 12-month P/E ratio of 1,230.7. Even Amazon and Google don’t have valuations that high. It’s nice to know that the company is earning money, but it’s possible that overenthusiastic traders have gotten ahead of themselves in bidding up the share price.

Therefore, it’s perfectly reasonable for value-focused investors to seek other ways to participate in the burgeoning electric vehicle industry. The idea is to find the next Tesla, though tomorrow’s big runner might not even be a car manufacturer.

Probably the second most popular American electric vehicle company today would be Nikola (NKLA). This company’s focus isn’t on fancy-looking cars like the ones Tesla has to offer. Rather, Nikola makes all-electric trucks, including both four-wheeled personal trucks and the big trucks made for cross-country hauling.

Nikola’s founder, Trevor Milton, is almost as eccentric and outspoken as Tesla’s Elon Musk. Since its debut earlier this year, Nikola stock has been extremely popular with the trading community.

Moreover, the share price hasn’t gone parabolic like Tesla stock did. So, if you believe that zero-emission trucks are the wave of the future, Nikola stock might be worth looking into.

Next on the list is a company with an unusual name and an even more unusual vehicle. The company is called Electrameccanica Vehicles Corp. (SOLO) and they offer a three-wheeled electric vehicle called the Solo.

It’s called the Solo because it’s only built to carry one person – just the driver and no passengers. These Solo cars are unusual-looking vehicles, but they can go up to 80 miles per hour, they go from zero to 60 mph in 10 seconds, and they have a charge time of 2.5 hours (which is pretty good for today’s electric vehicles).

The estimated MSRP is below $20,000 for the Solo, so it’s affordable as well as efficient. In a time when people don’t want to get near each other because of the coronavirus, it might be possible that Solo cars will be seen on a road or even a highway near you.

For a less direct investment in electric cars, you might be interested in Blink Charging Co. (BLNK). This company designs, manufactures, owns, and operate electric vehicle charging stations According to Blink, global electric vehicle purchases are expected to rise to 10 million by 2025 – and Blink seeks to expand its charging network in the most highly requested locations.

Earlier this year, Blink reached a major milestone of 1,000 installations of the company’s fast 19.2-kilowatt IQ 200 charging stations. So clearly, the company is preparing for rapid expansion across the U.S.

What’s particularly interesting about Blink stock as an investment is that you wouldn’t have to bet on any particular electric car company. Instead, you’d be betting on the general need for electric vehicle charging on the go. If the market is as growth-oriented as Blink forecasts it to be, then Blink stock could charge to the upside. 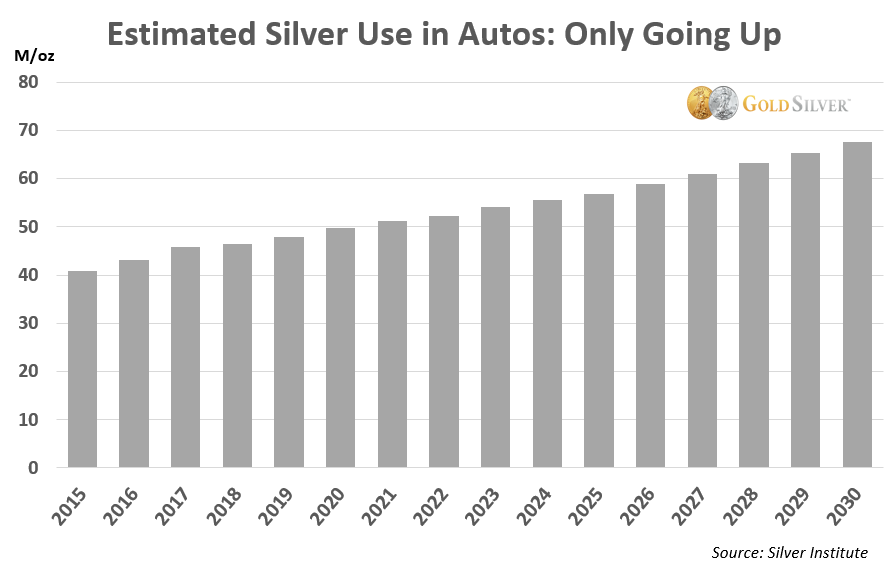 Silver was already known as the ultimate industrial metal. But now it’s going to be more useful than ever as a mainstay metal for the fast-expanding electric car market.

With nations like India and Norway striving to become 100% electric, it’s easy to envision a future in which the demand for silver is even greater than it is today. It’s yet another reason to invest in silver, in case you didn’t have enough reasons already.