How to Invest in the Metaverse Now

It’s been called a digitized 3D world, and the next frontier for social media. Ready or not, the metaverse is the future of technology, and investing in it today could be like buying Internet stocks in the mid-1990s.

Granted, those Internet stocks crashed in the early 2000s, but the best ones rebounded and provided life-changing returns over the next 20 years. As always, it’s the people who get in on the ground floor of a new, successful technology that get to enjoy the lion’s share of the gains.

You might remember people’s reactions when Mark Zuckerberg announced that Facebook would now be called Meta Platforms. On social media – including Facebook, ironically enough – many commentators mocked Zuckerberg for this abrupt name change and business-model pivot.

Maybe the change to Meta Platforms will work out well, or maybe it won’t. Admittedly, the newly rebranded company isn’t off to a great start, as FB stock slid 26% in a single day when Meta Platforms reported its quarterly earnings.

With that share-price haircut, however, the trailing 12-month P/E ratio for Meta Platforms declined to just 17. This suggests a bargain, so perhaps FB stock is an obvious entry point for mega-cap exposure to the emerging metaverse.

Qualcomm CEO Cristiano Amon emphasized the diverse range of applications for the metaverse, saying, “The metaverse is going to develop as a number of different opportunities… You’re always going to have the big social network, consumer play. You’re going to have a big one for gaming, but industrial is big.”

Amon further explained that there are “digital twins,” or virtual representations of real-world objects, for just about everything. You can have a digital twin of a car, for example, which can help a mechanic quickly identify where the car has a problem.

In this immersive virtual world, “everyone from individuals to large enterprises can work with others to build amazing virtual worlds that look, feel and behave just as the physical world does,” Kerris added.

For a less obvious metaverse play, investors might consider shares of Adobe (ADBE). We should remember that the build-out of the metaverse will require robust software, and that’s exactly what Adobe specializes in providing.

Among Adobe’s most metaverse-relevant software offerings is Aero, a product that’s used in developing augmented-reality experiences. With this in mind, Jefferies technology analyst Brent Thill asserted that “Adobe is the best software play for the metaverse – its creative tools will enable the next generation of the Internet.” 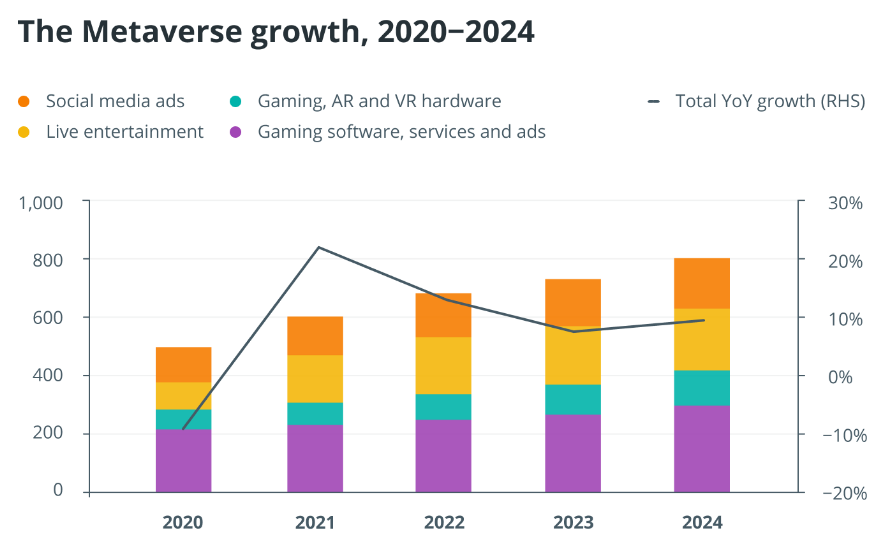 So far, I’ve given you well-known tech names that provide varying degrees of exposure to the metaverse. However, I’ve got one more stock pick in my back pocket, so to speak, and it’s a company that’s relatively unknown but will be quite familiar to metaverse insiders.

It’s a company called Matterport (MTTR), and with a $2 billion market cap, it’s smaller than the other companies I’ve mentioned. So, it’s riskier, but the growth potential may be greater.

Moreover, unlike the other stocks I’ve mentioned here, MTTR stock is a pure metaverse play. The company specializes in developing 3D-capture technology and “built worlds.”

“With over 15 billion square feet of data and growing, we’re building the largest digital library of spatial data and information in the world,” Matterport declares on its home page. Currently, thousands of businesses in more than 150 countries count on Matterport to digitize various spaces: homes, offices, hotels, shops, factories, you name it.

With these metaverse-stock picks, you can join this fascinating movement into unique dimensions which, to its users, are just as “real” as the physical world – and which could provide real profits in 2022.