INFLATION SHOCKER: Fed is on a Mission!

INFLATION SHOCKER: This Isn’t What the

Market Wanted or What the Fed Needed!

“Stunned” is the only way to accurately describe the sentiment on Wall Street as the highly anticipated Consumer Price Index (CPI) reading came out this morning. Just seconds before the numbers came out, the major stock market indices were firmly in the green; after the announcement, they suddenly plunged deep into the red.

This was so closely watched because equities traders know that the Federal Reserve has a long-term annualized inflation target of 2%. We weren’t even close to that in August when inflation was still highly elevated at 8.3%.

As long as inflation remains in the 8% range, the Fed will be forced to raise bond yields aggressively while also reducing its balance sheet of bonds and mortgage-backed securities at a rapid pace. This will put downward pressure on large-cap stock prices, which tend to have an inverse correlation with bond yields.

So, here are the numbers that just came out. The Bureau of Labor Statistics released its Consumer Price Index (CPI) reading for September earlier today, which showed that U.S. prices for goods and services rose 8.2% over the prior year and 0.4% compared to the prior month.

Now, you might assume that this is good news since September’s 8.2% is a little bit better than August’s 8.3%. However, this is a case of “too little, too late” since the Federal Reserve and the markets needed a much faster inflation deceleration – remember that 2% target and how far away we still are. 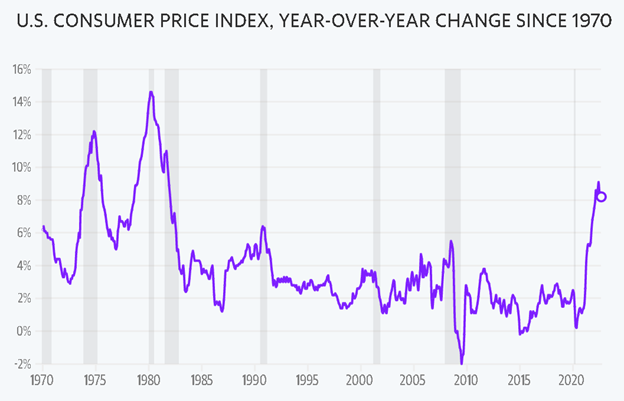 Besides, the actual numbers were worse than what the experts had anticipated. Economists were bracing for September inflation to increase 8.1% year-over-year and 0.3% month-over-month. The released data was worse than that, so the market’s assumption of good news was really just a setup for a stock market drop.

All of this comes just a day after an already problematic data readout. Yesterday, investors learned that the Producer Price Index (PPI), a measure of prices at the wholesale level, unexpectedly rose 0.4% in September after falling 0.2% in August.

Moreover, today’s data release shows just how much the American consumer is struggling under the weight of inflationary pressure. When we exclude food and energy prices, core CPI accelerated 0.6% month-over-month in September versus the Dow Jones forecast for a 0.4% increase. Perhaps most shockingly of all, the Food Price Index increased 0.8% for the month and was up 11.2% from a year ago.

Again and again, the data shows how the American middle class can’t catch a break. Shelter costs rose 0.7% in September and are up 6.6% year-over-year while transportation services increased 1.9% month-over-month and 14.6% on an annual basis. Meanwhile, medical care costs rose 1% in September – but at the same time, average hourly earnings declined 0.1% for the month on an inflation-adjusted basis and fell 3% year-over-year in September.

It’s no wonder, then, that large-cap stock indices plunged from bright green to deep red within a matter of seconds. Wall Street might not care too much about Main Street’s woes, but they can’t ignore the impact on businesses and the economy in general. 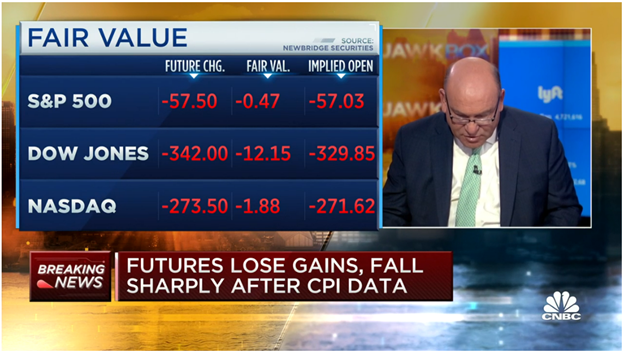 Imagine raising interest rates as much as the Federal Reserve has done this year only to watch inflation still spiral out of control like it’s doing now. The Fed’s tightening tools are clearly having little effect in controlling inflation – and now consider how much more aggressive the central bank will need to be.

It’s really a culmination of bad math and persistent policy errors on the part of America’s central bankers. The idea of interest rates coming off of zero is essentially mathematically incalculable being an “infinite” percentage increase. Practically, that’s not a true statement, but the rate at which the Fed wants to raise rates is not a pill this economy is going to swallow easily.

We’re all now forced to bear witness to a slow-moving train wreck. The Fed has already raised interest rates three full percentage points since March, and additional 75-basis-point hikes (or possibly more) are pretty much guaranteed for at least the next two FOMC meetings.

The end result is practically unavoidable and tragic as the nation’s central bank, supposedly the steward of America’s economy, steers us toward the devastation of a stagflationary environment.  The impact of combined inflation and recession will devastate businesses and families as the nation veers into an uncertain time when the causes are unlike anything we’ve ever experienced before.

I wish I could give you some positive news to go along with the negative. I can’t promise anything, though, as the Fed is the one steering the ship – and if you’ve seen the movie Titanic, you’ll know the ending isn’t a happy one.