If we needed any more proof that Biden is Obama 2.0, the return of Janet Yellen should convince any and all doubters that the Blue-majority government will reverse all changes made during the past four years and return the government to a regime of dollar worship and unprecedented spending.

And if you were hoping that Yellen as Treasury Secretary would be any different from Yellen as Fed Chair, don’t count on it. She didn’t believe that inflation was a problem during the Obama years, and she doesn’t see it as a problem today – even during a pandemic, when consumers need to stretch each and every dollar.

As the U.S. Treasury Secretary, Yellen can be counted on to defend the welfare state and the dollar as the king of all currencies. Among her chief rivals will be successful entrepreneurs and nonconformist defenders of private enterprise, like Elon Musk.

Musk has, of course, been a champion of electric vehicles and non-government space flight for years. And now he’s taking up the cause of cryptocurrency, famously buying $1.5 billion worth of Bitcoin and tweeting supportive comments on almost a daily basis lately.

He’s even gone so far as to say that Tesla will start accepting Bitcoin as payment for the company’s products. When that happens, Tesla will make history as the first major automaker to accept Bitcoin payments.

Musk even went so far as to change his Twitter bio to “#bitcoin” and the Bitcoin symbol. He’s also expressed enthusiasm for Dogecoin, another popular cryptocurrency which has gained traction in early 2021.

Another proponent is billionaire Mark Cuban, who recently compared the blockchain to the early days of the Internet. “What we’re seeing right now with this communal effort and the foundation of blockchain-type applications that people stuck at home can use to try to make money… just changed the game 180 degrees,” he said.

If you don’t understand the blockchain, Cuban added, “it’s going to smack you down and make you bleed.” So, it’s evident that there are well-known and respected supporters of cryptocurrency and the blockchain in the private sector.

Meanwhile, back at the government, Yellen is busy criticizing cryptocurrency and the blockchain, while also making it evident that she doesn’t fully understand it. “I don’t think that bitcoin… is widely used as a transaction mechanism,” she recently claimed. 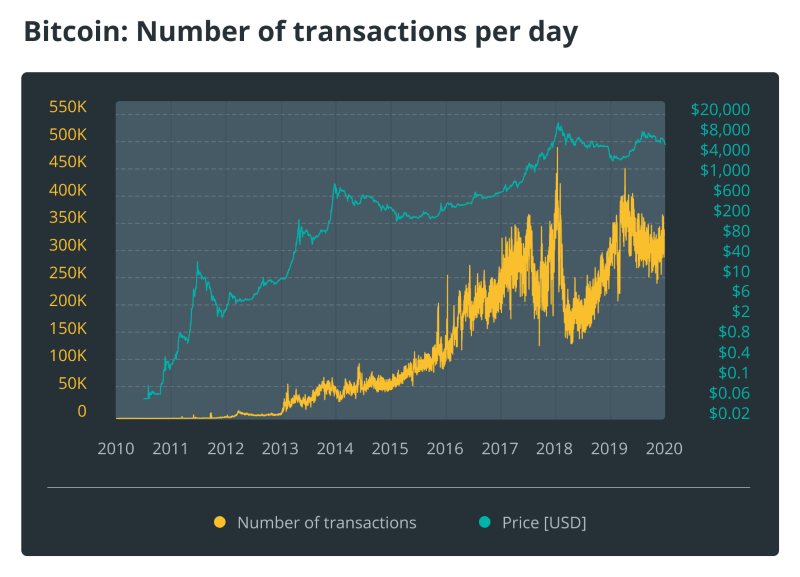 As you can see in the chart shown above, the number of Bitcoin transactions has increased exponentially over the years. So, I’m not sure how Yellen came up with the idea that Bitcoin isn’t “widely used as a transaction mechanism,” but the data disproves that claim.

Yellen then continued her anti-crypto rant, saying, “To the extent it is used I fear it’s often for illicit finance,” and, “It’s an extremely inefficient way of conducting transactions.”

Does Janet Yellen believe that fiat money is never used for “illicit finance”? Come on, Janet – the “Bitcoin is only used by criminals” argument is so 2017. And as far as efficiency of transactions, many folks find it much easier to make cross-border payments with cryptocurrency than fiat currency.

Yellen also invoked the old volatility argument: “It is a highly speculative asset and you know I think people should be aware it can be extremely volatile and I do worry about potential losses that investors can suffer.”

So all of a sudden, Janet Yellen cares deeply about our trading accounts. I don’t know about you, but I’m having a hard time trusting the government when it comes to the safety of my money.

Perhaps Yellen and some other anti-Bitcoin activists are feeling FOMO because they missed out on the huge gains – and they’ll keep missing out while blockchain adoption, and cryptocurrency prices, continue to rise.