I feel like everyone knows a 90-year-old in their lives that is smoking a pack of cigarettes on a daily basis while on a daily regimen of Coke and cheeseburgers or some variation of disregard of heath. Fundamentally, many people who have lived like this for years would not have made it to 90, but there are the few that swear they are healthier than ever, and honestly, if they are 90 and eating the way they want, good for them.

When taking a look at the U.S. large-cap market, I do see a fat, overweight system that is overdue for a correction. But just like the 90-year-old pounding away on the McDonald’s diet, it might not matter. In the end, we’ve come to find out that markets don’t immediately price in whether or not things are “too high,” “overextended,” “exhausted,” and so on.

If the markets were truly based on logic then trade tensions, rate hike fears, and elevated valuations should have tanked the markets a while ago. It turns out that the investing community is able to adapt and absorb these factors like a sponge.

No market cycles are alike, and attempting to bet on them with absolute certainty is like running out into a battlefield of arrows hoping not to be pierced.

The 1970s bring back some memories that some of us would rather forget: leisure suits, muumuu dresses… and the ugly specter of stagflation. The combination of persistent inflation, stagnant consumer demand, and relatively high unemployment presented a nightmarish economic backdrop to a turbulent decade – and there’s evidence that Stagflation 2.0 is under way in 2018.

Former Federal Reserve Chairman Alan Greenspan, who correctly warned the nation about irrational exuberance prior to the Great Recession, said that we are “moving toward stagflation” in May of this year. Granted, he’s retired now and is free to speak his mind without consequences, but still, that’s a dire warning rarely heard from a man in his position.

Greenspan also stated that the long-term outlook is “rather dismal,” the budget deficit is “downright scary,” and we’re in a “bond market bubble.” Without the Bernanke and Yellen “put” that the equities markets enjoyed in the past, Greenspan’s warning rings true in 2018.

To get a perspective of what stagflation looks and feels like, let’s take a look at the situation America faced in the 1970s. The price of oil jumped from $20 to $120 (WTI crude per barrel, adjusted for inflation), a staggering six-fold increase that crippled the economy.

Such a surge in oil prices is painful for multiple sectors, including airlines, shipping, and manufacturing, but also hits the pocketbooks of citizens across all economic strata. When gas prices jump at the pump, everybody feels the pain.

That’s the “-flation” part of “stagflation”: the 1970s were marked by rising prices in just about everything. Going back to oil and gasoline, do we see something similar happening today? 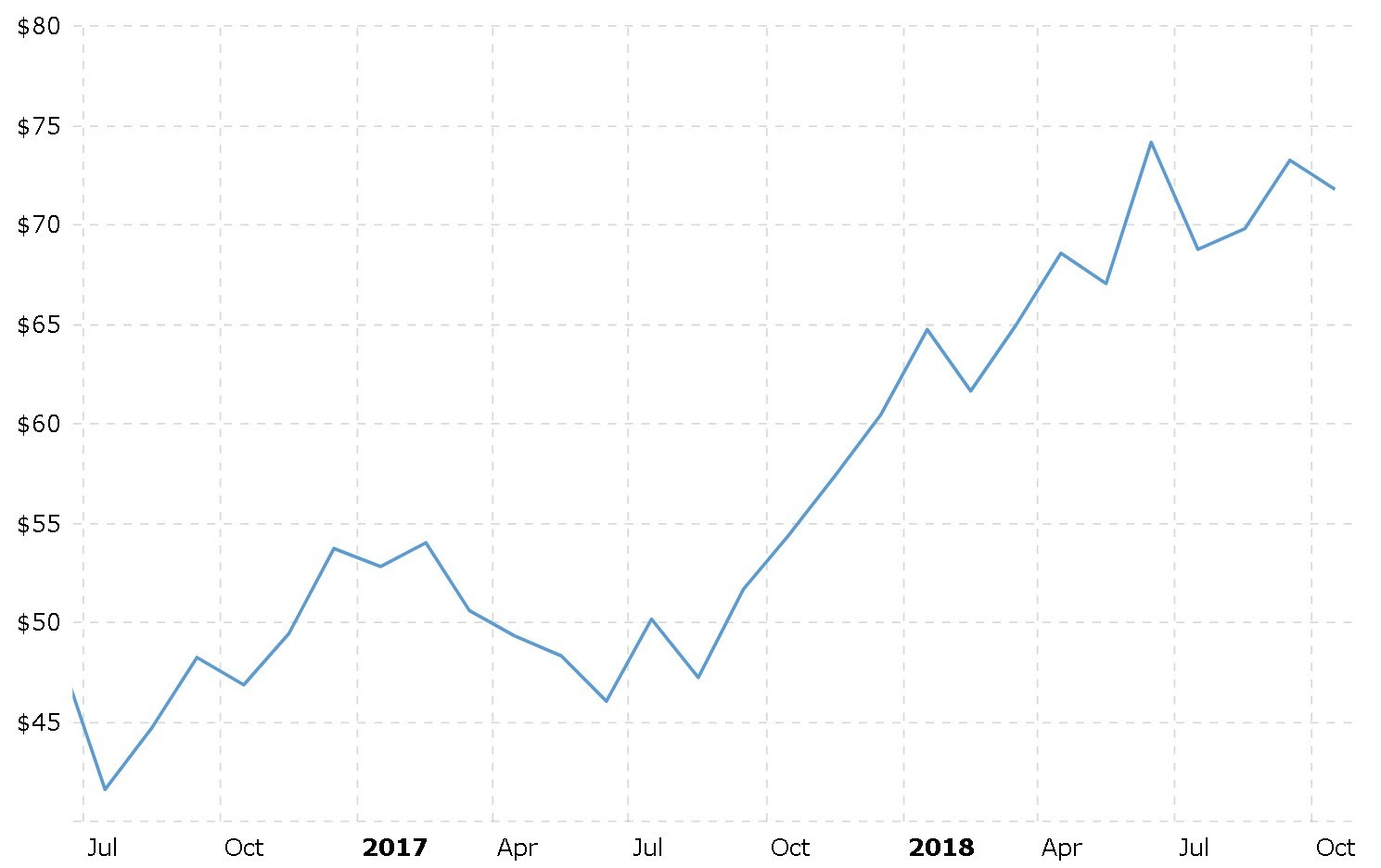 Oil prices tripling from $26 a barrel to $75 could just be the beginning, especially when we recall that oil had peaked above $130 – there’s plenty of room to the upside here. If you’re starting to get a sickening sense of déjà vu, you’re on the right track, but it’s much worse than you probably think.

Moving beyond petroleum prices, if we’re looking for a broader measure of inflation, we can check the consumer price index (CPI). This measures changes in the price level of consumer goods and services. It’s important to monitor the CPI because it’s the one-two punch of high prices and low employment that makes stagflation so devastating. 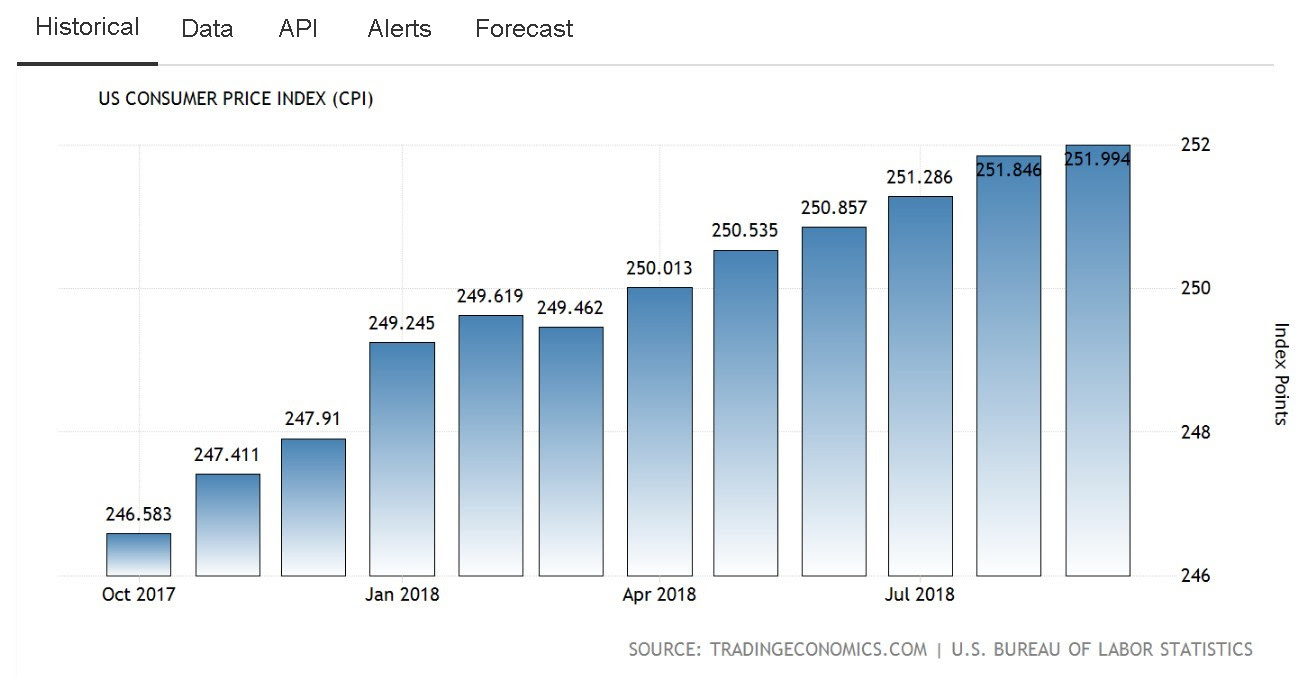 The trend is clearly higher in the CPI, and the inflation rate itself, according to the U.S. Government’s own calculations, is printing higher lows and higher highs.

When the inflation rate reached 3% this year, hardly anyone noticed – and, of course, the mainstream media buried the headline underneath all the fanfare over the apparently “low” unemployment numbers coming from the government.

***Keep in mind it will continue to be when real returns in stocks and bonds subside that will turn commodities into a hypergrowth opportunity, and I believe we are not far off from such an opportunity as this.***

That leads us to the other component of stagflation: the “stag-” stands for stagnation, which tends to manifest itself as low employment. We can look at the terrible recessionary period of the 1970s as an example of this: after 1974, unemployment averaged 7.9%, and some years saw the rate reach more than 9%.

The numbers might seem better in today’s environment, but bear in mind that there’s always a conflict of interest when the government reports employment figures: truthful reporting is never as important as promoting the idea that the economy is healthy and our government officials are doing a great job.

So, when you take a closer look at the employment situation in the U.S., it’s really not very different in 2018 compared to what we saw in the 1970s; it’s just reported differently. To view the state of employment in the U.S. from another angle, we can look at the civilian labor force participation rate, which is truly dismal: 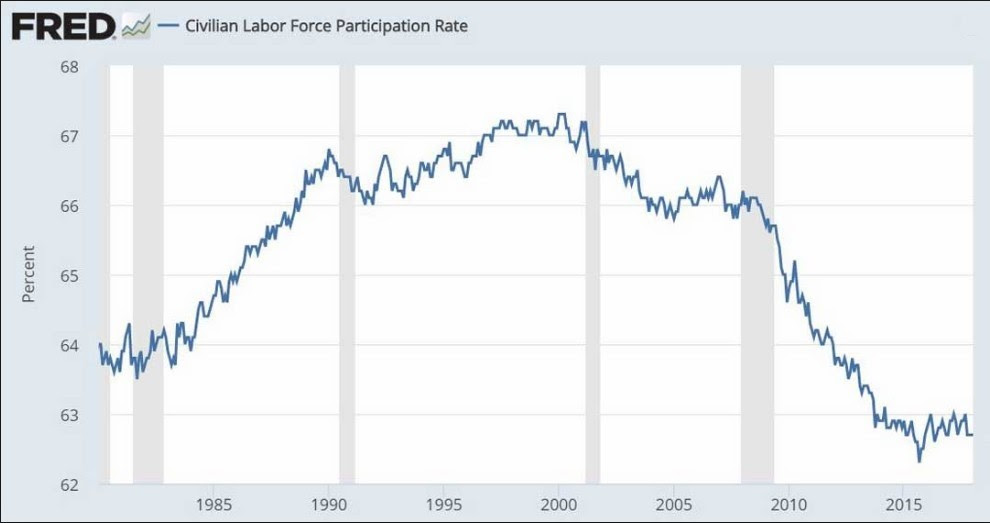 The labor force participation rate, which measures the percentage of the working-age population that is working or looking for work, is currently 62.7% – the lowest rate since the 1980s. This paints an unsightly picture of the real state of the economy: discouraged by a forbidding job market, people have simply dropped out of the workforce.

A close inspection reveals that the only difference between the stagflation of the 1970s and the Stagflation 2.0 of today is the way it’s reported – or misreported, to be more precise. It’s been said that history doesn’t repeat, but it does rhyme, and if you listen closely, you can hear echoes of the terrible depths of the 1970s in today’s economy.