Liberty and Justice for Some: America’s 1% Are Wealthier Than They’ve Been Since 1929

In more ways than one, America 2019 is starting to resemble its former self from 90 years ago. 1929 was a time of euphoria, particularly among those who could afford to invest in the stock market. And for those who couldn’t, the divide between the haves and the have-nots was stark, with the top 0.1% collectively owning a nearly 25% share of the nation’s total household wealth.

In hindsight, we all know what took place after the euphoria of 1929. And while I’m not prepared to declare a market top in this article, there is at least one parallel to be drawn between today’s economic environment and that of 90 years ago: America’s rich have gotten much, much richer while the middle class has been left behind.

University of California, Berkeley Economics Department researcher Gabriel Zucman has provided concrete factual evidence for this contention with an exhaustive study, which finds that “U.S. wealth concentration seems to have returned to levels last seen during the Roaring Twenties.” 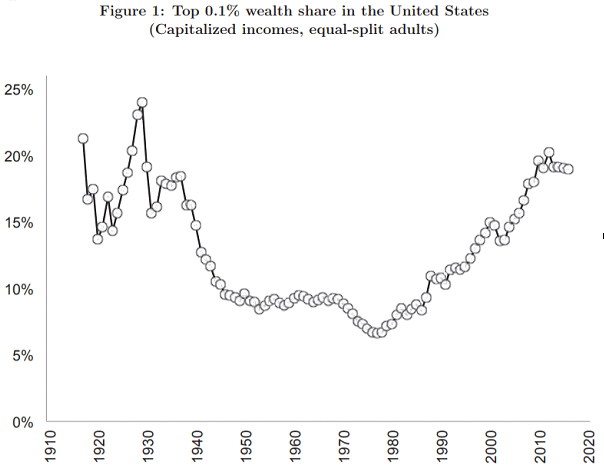 Not that it’s solely an American phenomenon, as the collective distribution of global wealth, including that of China plus Europe plus the U.S., shows a huge divide between the top 1% and the bottom 75%. Just as significantly, the global share of wealth held by the top 1% has drifted upwards since 1980: 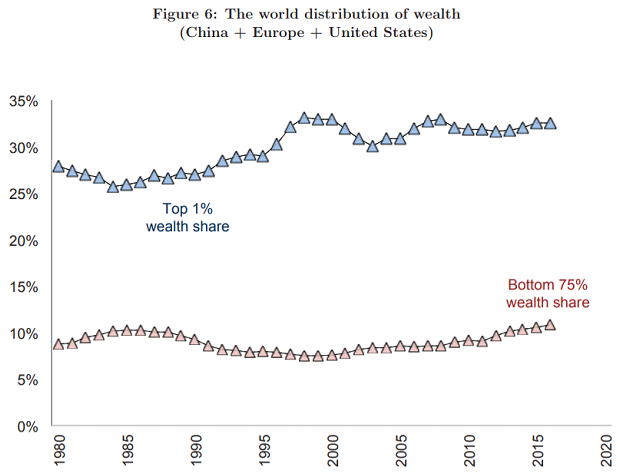 As Zucman sums it up: “Evidence points towards a rise in global wealth concentration: for China, Europe, and the United States combined, the top 1% wealth share has increased from 28% in 1980 to 33% today, while the bottom 75% share hovered around 10%.”

Actually, the wealth gap is probably worse than that, as the world’s wealthy have modern ways to hide their riches: “Since the 1980s, a large offshore wealth management industry has developed which makes some forms wealth (namely, financial portfolios) harder to capture,” explains Zucman.

Rewinding to 1929 and focusing on the U.S., we see that the Great Depression closed the wealth gap somewhat over the following decades, with the top 0.1%’s share of the collective wealth dropping below 10% in the 1970’s. In contrast, the Great Recession of 2008-2009 has actually had the effect of increasing the income gap, with the top earners’ income dropping by only 4% while the bottom households’ income declined 20%.

On the other hand, it’s only been a decade since 2008-2009, and in many ways the impact of the Great Recession lingers today. Meanwhile, the major U.S. blue-chip stock market indexes have increased by 300% since the 2009 bottom – though this has mostly been enjoyed by the rich, since most people in the middle class don’t own stocks in substantial quantities (if at all).

It could undoubtedly be argued that the relentless stock market upward grind has disproportionately benefited the wealthy, a self-sustaining cycle that has lasted for the better part of a decade. As Real Investment Advice analyst Jesse Colombo put it, the “growing U.S. wealth inequality is the byproduct of an unsustainable bubble in asset prices such as stocks and bonds.” 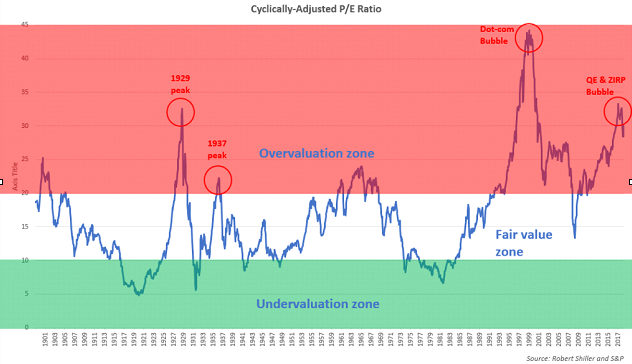 And bubbles don’t last forever, so perhaps a replay of 1929 – though it would be devastating, admittedly – could at least have the silver lining of shrinking the wealth cap back to more acceptable level. In Colombo’s words: “America’s wealth inequality is not a permanent situation” because “the asset bubbles behind the wealth bubble are going to burst.”

I don’t expect the contraction of the wealth inequality gap to be of much solace to the middle class when the economy goes haywire. Until then, we can enjoy the spectacle of America’s biggest asset bubble – even if the 99% won’t get to participate, at least we can say we were there when it happened.