MARKETS UNDER STRESS: Falling Into the Jackson Hole…

MARKETS UNDER STRESS: Falling Into the Jackson Hole…

It’s funny how the mainstream press will so quickly declare a bear market “over” after the passing of a few positive weeks for stocks. A bounce is all it took for the pundits to mark the start of a brand-new bull market – but their forecasts, while supremely confident, were all too premature.

They were right for a little while, as wrong people typically are. Four weeks of euphoria based on the assumption that the Federal Reserve would pause interest rate hikes or even start cutting rates soon buoyed the equities markets in July and early August.

The problem with assumptions is that they don’t always turn out to be true. Stock investors were desperate for some sign that Jerome Powell and the other Fed heads would finally quit slowing down the flow of money through rate hikes. So, they scoured Powell’s most recent statement for clues and decided that being “data-dependent” meant there’d only be a 50-basis-point rate hike in September and a complete pause or reversal after that.

That, however, was a belief based more on hope than hard evidence. Reality is starting to settle in as market participants realize that Powell is hellbent on achieving 2% inflation, even if that means tanking the economy and markets for a while.

The Fed’s priorities are fully evident in the latest FOMC meeting minutes, which state “Fed officials ‘recognized that policy firming could slow the pace of economic growth, but they saw the return of inflation to 2% as critical to achieving maximum employment on a sustained basis.’” With that, economists expect Powell to reinforce in his Jackson Hole speech this week that slowing economic growth is a price he’ll gladly pay in order to achieve a 2% target inflation.

This realization sunk in on Friday as the S&P 500 slipped 1.3% and the NASDAQ fell a full 2%. This decline snapped a four-week winning streak and portended more bloodshed ahead. In fact, Monday was even worse than Friday, with the S&P 500 skidding 2.1% and the NASDAQ plunging 2.6%.

Yet, the market’s anxiety isn’t only about the Jackson Hole Symposium and what Powell will or won’t say. The rapid erasing of prior weeks’ market gains is also a sign that multiple economic challenges are being brought to light all at the same time.

Among the most obvious problems is the rolling over of a long-overheated U.S. housing market. This time around, though, it’s not prompted by the unwinding of mortgage-back securities and other speculative instruments. Rather, it’s induced by none other than the Fed, which is hiking interest rates to a point where families can’t afford to make their monthly mortgage payments.

Another stress on equities is the rise of Treasury bond yields and the dollar, which tend to have an inverse correlation with large-cap stocks. Then there’s the litany of other issues that started with COVID-19 and only got worse over the past two years, such as supply chain disruptions and shortages of qualified workers in critical employment fields. 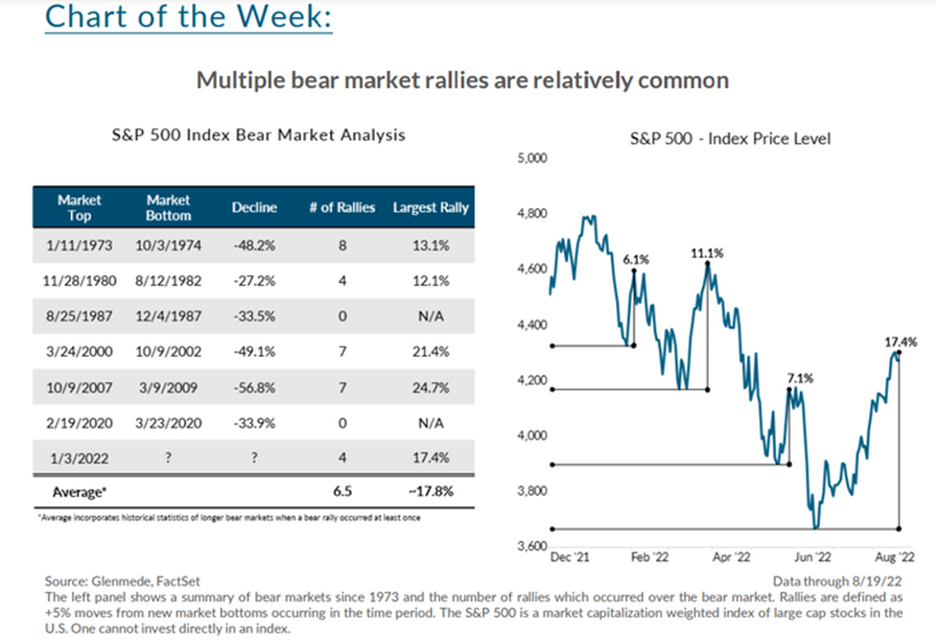 The 800-pound gorilla in the room, though, is inflation. While the U.S. dollar may be strong in relation to other world fiat currencies, it’s losing its purchasing power in America rapidly. Despite the CPI declining from 9.1% to 8.5%, the Fed will still have to take strong action to get inflation down to 2%.

That’s why we’re hearing about St. Louis Fed President James Bullard supporting a 75-basis-point rate hike in September. It’s why investors are so fearful to hear what Powell will have to say at Jackson Hole.

Jackson Hole will come and go, yet all of the economy’s foundational problems will still be there unsolved and glaring. It’s fine to fear the Fed’s policy errors, but the cracks in the foundation run deeper than that and will persist until the markets can’t ignore them anymore.