Mega-Millions Up for Grabs: It’s Only Just Begun

There’s a saying that most people overestimate what they can achieve in a year and underestimate what they can achieve in a decade. It’s a huge truism and something I hope my readers take to heart in their lives ranging from finances, health, relationships, and spirituality. You only have one life to live, and unless science figures out how to upload our brains into robots, each day that passes is one day closer to the grave. Live life with fervor.

But talking about how much has changed in a decade, consider the booming cannabis industry. Cannabis was the gateway drug that would be put alongside heroin and cocaine years ago, but as I’ve covered time and time again here, this is all changing.

Investors are starting to want a piece of the pie, but so are the biggest names in the world.

The American journey from marijuana’s prohibition 80 years ago to December’s passage of the Farm Bill has been hard-fought and amazing to behold. If you’re old enough to remember a time when the government was telling everybody to “just say no,” you can appreciate how encouraging it is that the Farm Bill is “just saying yes” to legalized hemp throughout the nation.

In my opinion, this is another stronghold that has been taken out of the criminalization of cannabis. Legalizing hemp is a boon for the agricultural industry, but it could also pave the way for a massive increase in revenues from CBD sales. This is a very popular market, with celebrities such as Morgan Freeman and Michael J. Fox touting CBD products for their health and symptom reduction benefits.

The votes are in: America has reached and surpassed the tipping point of cannabis acceptance, with a strong majority supporting marijuana legalization:

Among millennials, the majority is even more overwhelming, with 74% saying that they support legalizing marijuana. Knowing that millennials have tremendous purchasing power, large corporations have been climbing over each other to take positions in cannabis companies.

When Corona beer maker Constellation made a $4 billion bet on Canadian-licensed producer Canopy Growth Corp., Goldman Sachs acted as the financial advisor for the deal and Bank of America Merrill Lynch provided committed financing. This is a huge considering the vote of confidence from mega-corporations who have done their research and know where the cannabis and CBD market is headed.

The competition is heating up as major players take positions in the American cannabis industry which, according to Cowen’s Vivien Azer, is poised to grow to $80 billion by the year 2030. When Marlboro cigarette manufacturer Altria Group agreed to buy a 45% stake in cannabis company Cronos Group in December for $1.8 billion, they were naturally seeking first-mover status in America’s fastest-growing industry.

I cover the cannabis market and I can barely keep up with the flurry of exciting developments. You’ve got Corona brewer Constellation Brands investing an additional $4 billion into licensed producer Canopy Growth Corp., increasing its stake to nearly 40%… The list just goes on and on. 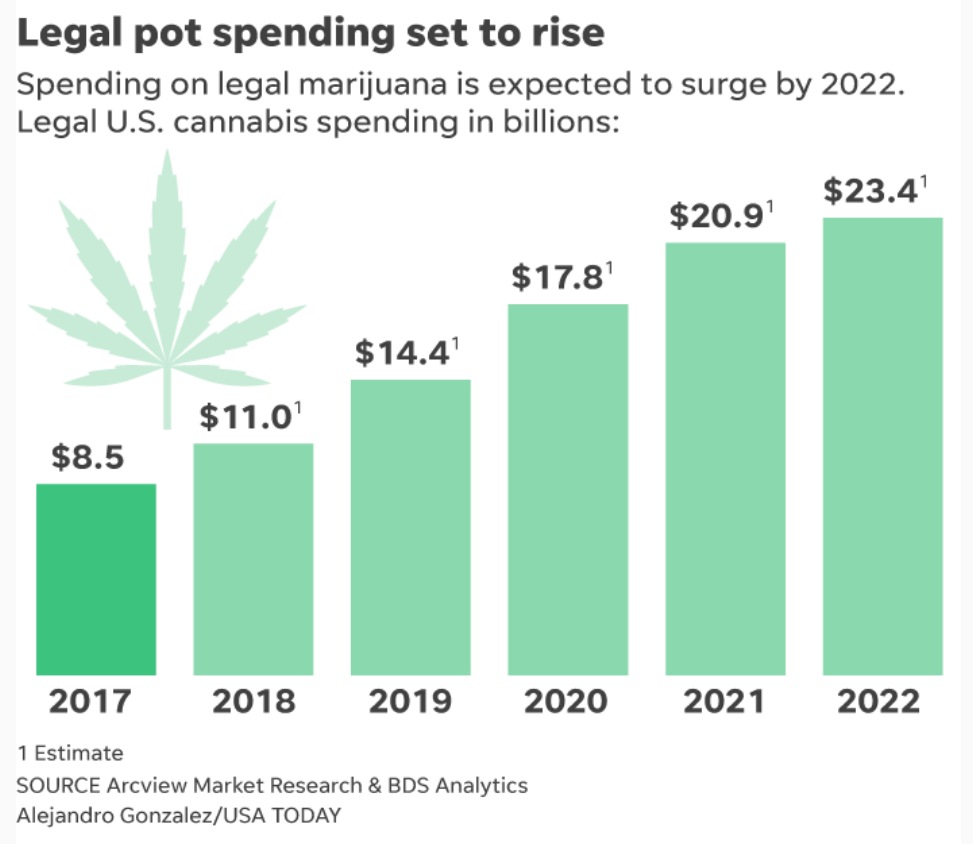 Given the astounding surge in consumer spending on legal cannabis, it’s easy to connect the dots to increased revenues and more strategic partnerships on the horizon. It’s big business – as Inception REIT CEO Richard Acosta put it, “Companies like Constellation are investing real money in marijuana companies… It validates that demand is there and represents a broad awakening that this is a real industry.”

The demand isn’t only from companies and consumers; it’s coming from the investing community as well. Popular broker TD Ameritrade recently reported a day in which five of the six stocks with the most trading volume were cannabis-related, while Robinhood is literally having trouble executing the massive volume of pot stock trades coming through their platform.

These are signs of the boom phase, and it’s still in the early stages – there’s plenty of room for more upside in cannabis. You’ll be in great company when you add to your cannabis stock holdings, as massive companies are investing as well, knowing that the staggering sales will translate to stock share profits soon enough.

Major bench marker Canopy Growth was up nearly 100% in January 2019. This is a huge vote of confidence for the industry and shows that it’s not a “flash in the pan” investment idea. We are in the early stages of this boom. We are shoulder to shoulder with them investing in this sector and I’m on the hunt for our next big winner as you are reading this.

This is an exciting time to be alive. Do not underestimate how different the world will look in 10 years and how big of a behemoth cannabis will be as a sector as we approach 2030.

Are you ready for it?