If you want to know what’s really going on under the hood of the stock market, what you need to be watching is the bond market. You can read the reviews on a restaurant, but if you want an idea of how good it is, see how many people are lined up for lunch or dinner.

Unlike stocks, which are dragged around by retail traders with little to no information, the bond market is chiefly the domain of more sophisticated and informed investors.

As a result, the bond market is much more ahead of the curve; bond prices rely less on immediate sentiment and more on what’s actually going on in the economy. For the past quarter-century, the bond market has been 79% larger than the stock market on average.

The dependence on a functioning credit market for the status quo to be maintained is vital and the scope of its importance is very underappreciated.

Bonds are traditionally viewed as a hedge against stock market crashes – or at least they were for generations, though recent systemic shifts have changed the bond market dramatically. But for many years, retirees could park their nest eggs in U.S. Government bonds and expect to earn a “risk-free” yield of 4% to 6% every year.

There was even a time during World War II when investing in government bonds was considered a patriotic thing to do. Starting in 1971, when the U.S. dollar wasn’t pegged to gold anymore and the inflation rate exploded, bond yields increased substantially. Believe it or not, the annual yield on the 10-year Treasury note was 15% at one point in 1981: 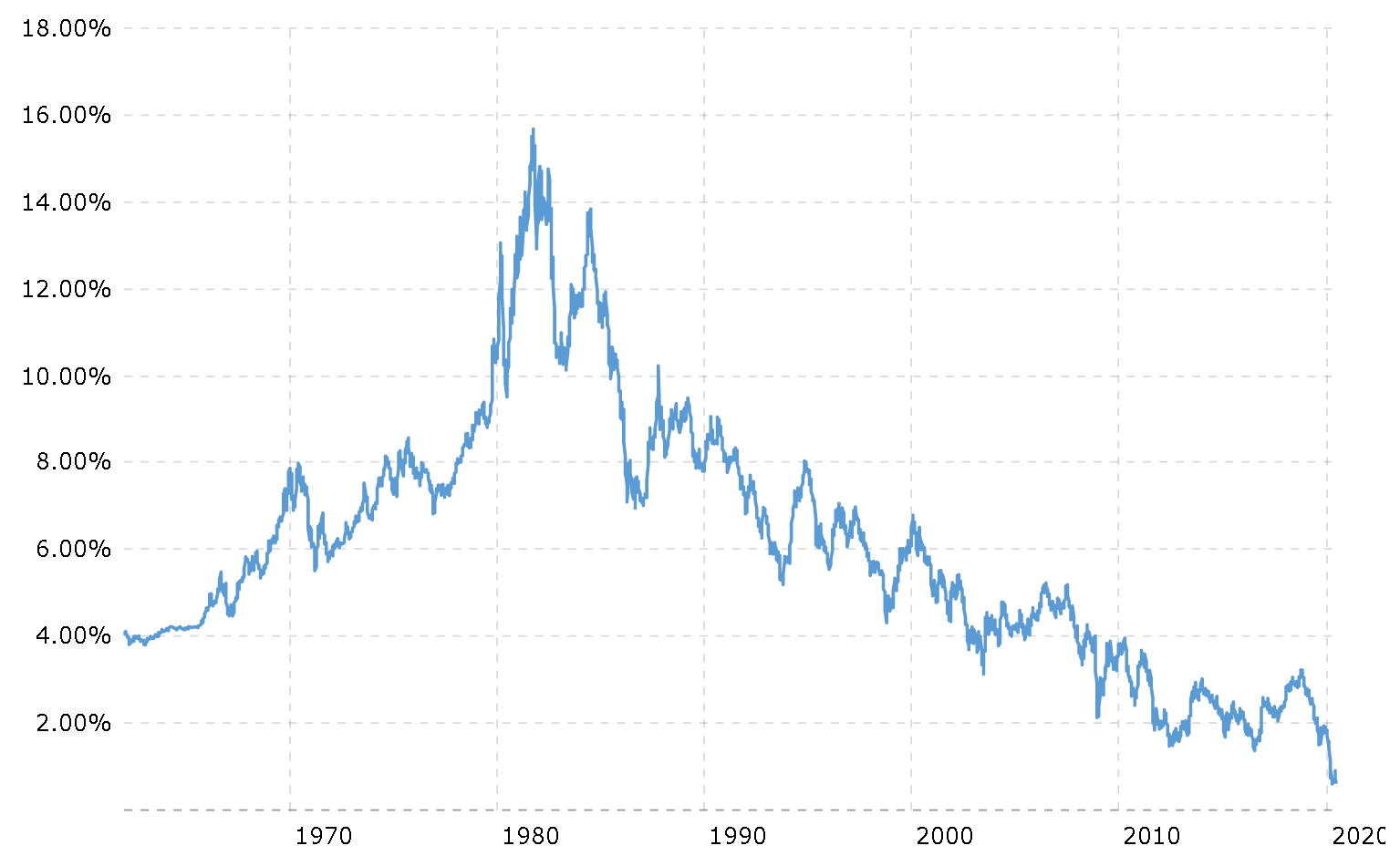 It’s easy to see why traditional big bank money managers recommended a portfolio of 60% stocks and 40% bonds in past generations. Government bonds offered solid yields, protection against a stock market crash, and little to no risk (or so it seemed at the time).

Bond prices move in the opposite direction of bond yields, so 1981 marked a low point for bond prices. Back then, hardly anyone expected the incredible bond-price bull market that has persisted for the past four decades.

With government bonds yielding next to nothing in 2020, their value as a hedge against stock market volatility has clearly diminished. The traditional allocation of 40% bonds in one’s portfolio doesn’t have the same appeal that it once did, especially as bond yields aren’t even keeping up with the inflation rate anymore.

After the financial crisis of 2008-2009, the bull market in bonds kicked into fifth gear as the Federal Reserve furiously purchased bonds, thereby keeping the prices high and the yields low. However, the bond-price bull market will come to an end soon.

We are literally 40 years into a bond bull market. This is unsustainable and will not go on forever, as hard as it is to bet against a four-decade bull.

Inflation is low now but history shows that low inflation doesn’t last forever and the dollar’s decline is inevitable. And the decade of the 1970s shows what happens to bonds when inflation rises.

With the U.S. in a currency war with China, the dollar is the weapon and the wartime strategy is to keep it as competitive (cheap) as possible. Plus, the government fully expects to print and spend billions of dollars as “stimulus” funds for businesses and families struggling during the COVID pandemic.

The possibility of an inflationary, rising interest-rate environment is something that few people are predicting but every investor needs to prepare for. The wealth destruction of a concurrent decline in stock and bond prices would be almost incomprehensible – pension funds and retirement accounts would be absolutely decimated.

The fragile economy cannot handle an increase in inflation, nor can it cope with bond yields rising. The Federal Reserve tried raising the 10-year U.S. Treasury note yield to a mere 3% in late 2018 and the stock market immediately fell by nearly 20%.

So again, watch the bond market carefully for clues as to the future of stocks. And remember what gold and silver investors know quite well: government bonds are most certainly not the only available source of income and stability for uncertain times.