It was the worst single-session drop for gold in six weeks – a major setback after teasing the $1,800 level all year long. At the same time, silver dipped below the $23 for the first time since November of last year.

I started to sense that something wasn’t quite right when commodities prices started to wobble 24 hours earlier, as Wall Street quivered about the prospect of an economic slowdown in China, the world’s second-largest economy.

Reports came out of China saying that property developer China Evergrande Group has serious debt problems which could be just the tip of the iceberg for China’s housing sector, a major part of the nation’s economic growth.

That, by itself, shouldn’t be enough to precipitate a meltdown in commodities. On the heels of that, though, some surprising data came out: retail sales figures improved in August, more than what Wall Street had expected.

Within that data, notable highlights included clothing and clothing accessories stores, which were up 38.8% from August 2020, while gasoline stations were up 35.7% year-over-year.

Whether it’s “good” or not, depends on whom you’re asking. The market interpreted the data as a sign that the Federal Reserve could increase interest rates sooner than expected. 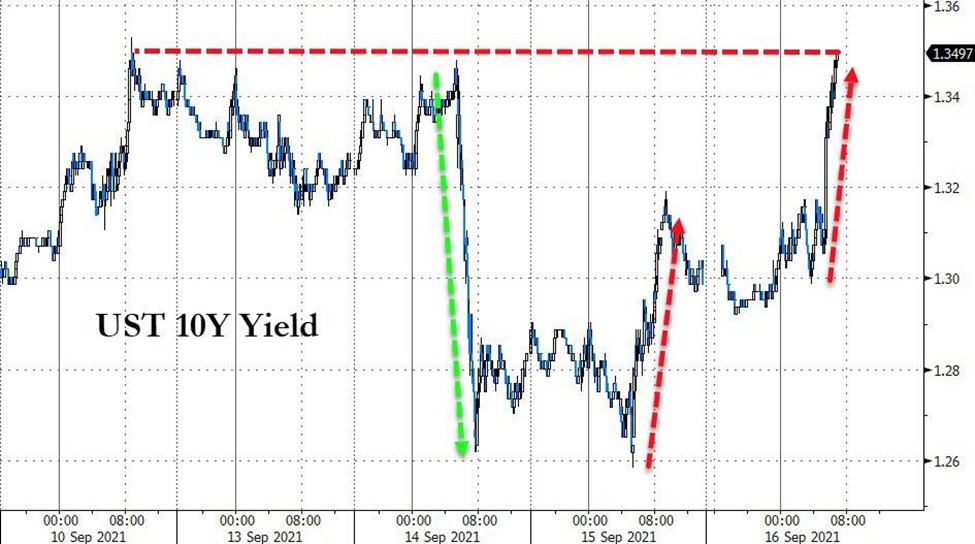 This, in turn, sent bond prices crashing and bond yields higher – a knee-jerk response to fears of a slightly less accommodative Fed.

Of course, it’s irrational and not everybody’s freaking out. For example, Saxo Bank’s chief investment officer, Steen Jakobsen, expects Treasury yields to “remain range-bound between 1.25% and 1.35% until next week’s FOMC meeting.”

And there was a run on government-controlled assets generally, not just bonds. Hence, there was a spike in the U.S. dollar, particularly against the euro and the yen.

As a result, the dollar index, which measures the U.S. currency against six others, rose to its highest level since August 27.

Also contributing to the dollar’s boost was the disappointing jobs-market data that came out: U.S. initial claims for state unemployment benefits increased 20,000 to a seasonally adjusted 332,000 for the week ending September 11 (economists had only forecast 330,000 initial claims).

Add into the already complicated mix, Wall Street’s nervousness about the upcoming Federal Reserve FOMC meeting, which is schedule to take place on September 21 to 22. 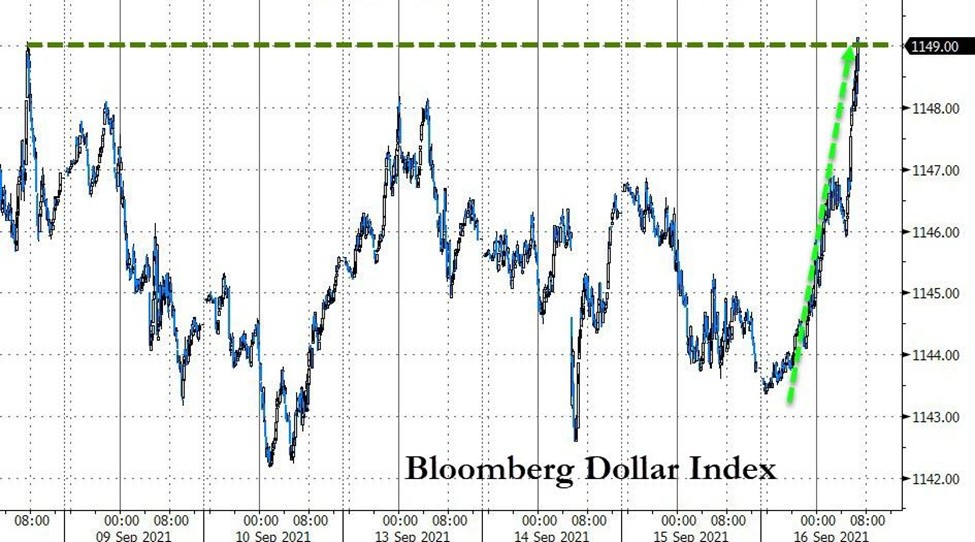 More than anything else, though, it’s the dollar that Wall Street was watching like a hawk. The sheer speed of the move the U.S. dollar is primarily what smashed the gold and silver prices.

Before you jump to any conclusions, though, take another look at the chart above. Notice how the dollar has come to a hard resistance level – and consider that if the dollar falls back to earth, gold and silver’s next move will assuredly be to the upside.

It’s times like this when we can clearly see who’s ready to get wealthy in the precious metals bull market, and who’s not. You need to imagine metals as a beach ball under water: it will get pushed down, but then it will always rise back up to the surface.

The taper-threat headlines are designed to shake out the weak hands in the commodities market. Before you panic-sell your gold and silver, ask yourself: how have these assets performed over the past 20 years?

Investors who stayed the course through the headlines and the noise, the Fed’s posturing and deception, the dollar’s head-fakes and eventual decline – they profited handsomely from gold and silver, and will absolutely continue to do so.