It’s astounding how things can change so much in just 12 short months. A year ago, the Federal Reserve was buying up Treasury bonds like they were going out of style. Now, the central bank is allowing the $9 trillion worth of Treasuries and mortgage-backed securities on its balance sheet to mature without any intention of replacing them.

A balance sheet that was built up since the financial crisis of 2008-2009 is winding down, but not without tremendous stress on the economy and financial markets. After all, you can’t have a 180-degree turn from Santa Claus to the Grinch without ruining Christmas.

In late 2021, the buzzword was “recovery” as post-COVID euphoria set in and retail traders bought up stocks and cryptocurrency. Today, the word on everybody’s lips isn’t “recovery” but “inflation,” though you’ll also hear talk of a Fed “pause” or “pivot” back to interest rate cuts.

That chatter is wishful thinking, though, since Federal Reserve Chairman Jerome Powell provided no indication that the central bank will stop raising interest rates anytime soon. Sure, we’ll probably get a 50-basis-point rate hike this month, but that’s still more strain on America’s businesses after four consecutive 75-basis-point rate hikes.

It’s the Great Unwinding, which could also be called the Great Deleveraging since the monetary-support punchbowl provided by the Federal Reserve is now being taken away. The party’s over, and the financial markets are feeling the hangover.

Always remember this rule: the bigger they are, the harder they fall. Notice how much room there is for the Fed’s balance sheet to decline. The air pocket below has a whole lot of space since Powell is focused on reducing inflation regardless of the consequences: 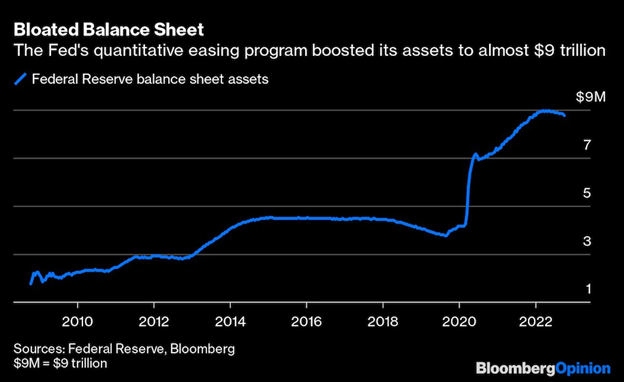 For over a decade, the stock market was propped up by liquidity being pumped into America’s banking system through billions in Treasury purchases. It’s no coincidence that large-cap stocks and the Fed’s balance sheet moved up in tandem. During the past 12 months, they’ve been leveling off and starting to head south together.

We predicted multiple times that there would be rising inflation in the wake of unprecedented stimulus payments in response to COVID-19 and the Fed turning on a dime from ultra-dovish to massively hawkish as amateur investors learn the hard way that Jerome Powell never really had their back.

Cryptocurrency traders witnessed shock and awe as Bitcoin raced to $69,000 only to retrace back to $16,000, all in less than a year. Meanwhile, the same FAANG tech stocks that led the broad-market rally in 2021 are deep underwater now, with the NASDAQ currently down by roughly 30% from its peak.

In a way, we could compare December 2021 to December 2019: a time of complacency with no awareness of the anxiety that was about to grip the markets. A year ago, if someone said the dollar would rally throughout 2022, economists and analysts would have dismissed them outright. 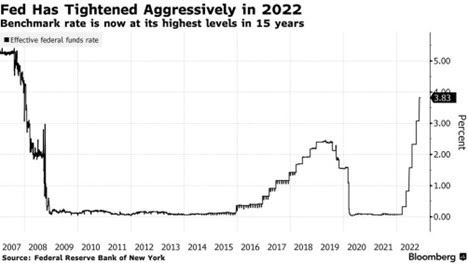 Yet, here we are, and the Fed’s abrupt U-turn from market angel to market devil has investors piling into cash while bonds, stocks, and cryptocurrencies are getting hammered. The chart above shows how the Federal Reserve kept bond yields near zero before launching into a hiking frenzy.

On the other hand, just as Powell turned on a dime from dovish to hawkish, he can turn right back to dovish again at any given moment. This wouldn’t even require an actual pause or pivot; just a hint that the pain will end soon would be enough to send risk assets like stocks and crypto higher.

That moment will occur at some point, and when it does, the dollar’s bull market will come to a screeching halt. Consequently, a host of assets will head higher: stocks, Bitcoin, gold, and silver will have their time to shine once Powell gives the green light.

You don’t have to go all-in, but it’s not a bad idea to have some skin in the game before the relief rally happens. At least now we know that 2022 was quite different from what the “experts” thought it would be. Without a doubt, 2023 will also stump the pundits.