Next and Biggest Shoe to Drop!

is the Next and Biggest Shoe to Drop!

Hardly anybody wants to revisit 2008, but sometimes the sense of déjà vu is too strong to ignore. It’s not just that stocks are rolling over, though that’s certainly a telltale sign. No, it’s much bigger and deeper than that since the coming implosion will strike much closer to home – literally.

Think of the current weakness in last year’s “growth stocks” as the proverbial canary in the coal mine: not the problem itself but a symptom of a broken system. Many people didn’t participate in the run-up of FAANG stocks, SPAC stocks, etc. last year, so they might not even notice if and when their values get slashed.

However, people won’t be able to ignore a much more foundational market implosion. A real estate collapse will hit much harder than, say, Netflix crashing 75% or your average tech stock taking a haircut. NASDAQ stocks are removed from the average American family’s life; consider that the tech stock crash of 2000-2001 didn’t lead to widespread economic ripple effects for workers outside of Silicon Valley.

In contrast, a real estate market crash will wreak havoc on American families because a home is typically a non-wealthy individual’s biggest investment. It’s where people get the money to refinance, build a pool, engage in other construction/home improvement projects, finance a vacation, etc.

As a result, a small move in the needle of real estate is compounded because people are using debt against their real estate. This is exactly what happened in the run-up to the Great Recession of 2008-2009; once people lose significant value in their homes, their financial freedom and ability to spend are severely restricted. 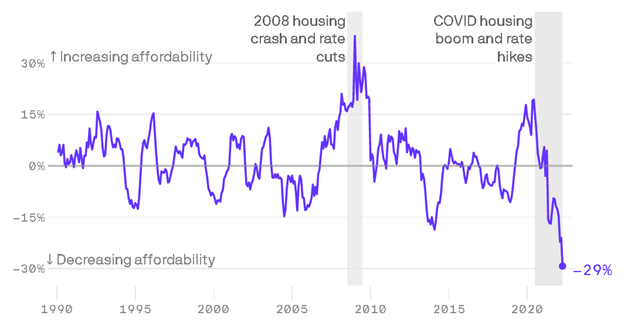 Shockingly, the current housing market crisis is fundamentally worse than what took place during the Great Recession. The signs of a collapse are undeniable: as measured by the National Association of Realtors, surging home prices and mortgage rates reduced housing affordability in the U.S. by 29% over the last year.

Furthermore, housing market research firm Black Knight reported that the monthly principal and interest payment on an average-priced home by a buyer who puts 20% down has increased 44% since the start of the year.

It surely wasn’t difficult for Bank of America analysts to connect the dots between 2022’s affordability collapse and current home price appreciation levels, which the analysts warned are “likely at or near the peaks for this cycle.”

That is an analyst’s polite way of saying that home prices are topping out now. In other signs of an impending rollover, roughly 35% of real estate agents reported that they saw buyers dropping out of the market completely amid higher interest rates (which we can thank the Federal Reserve for).

Plus, mortgage applications have fallen to their lowest level in 22 years, according to data from the Mortgage Bankers’ Association, and home refinancing and purchases are down considerably as well. Whether you’re a homeowner in America or not, this is a boom-to-bust cycle that will affect practically everyone. 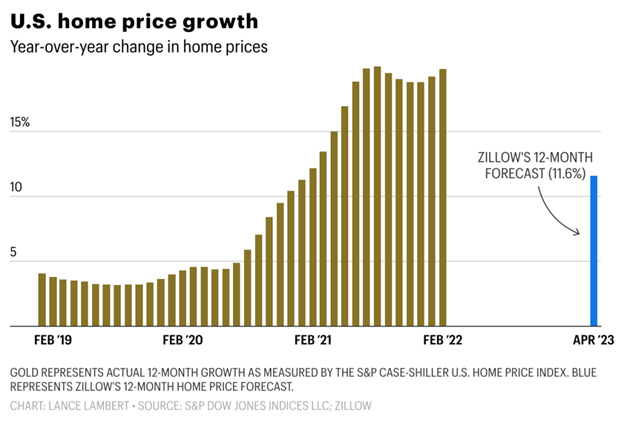 There’s a stark difference between what people can do financially when their home values are high versus what they suddenly can’t do when their home’s value is cut in half or worse. Again, think of the Great Recession: people go into survival mode, shopping and spending are impossible, and the entire economy goes into a death spiral.

To put it bluntly, the unraveling of the housing market will be the next shoe to drop but also the most impactful consequence of the Fed’s tightening cycle. When borrowing and lending activity plummet, the broader economy can’t function properly – again, this is more reminiscent of 2008 than 2000.

This isn’t your father’s real estate crash caused by a subprime mortgage crisis. The current crisis has been engineered and telegraphed in advance, and the devastation is inevitable. On Wall Street and Main Street, there will be no shelter from the fallout – there won’t be a place for many people to call home.