No Foot on the Brake Pedal: The Fed Will Not Reverse Its Easy Money Policy

If you’re preparing for the Federal Reserve to “taper” or slow down the breakneck pace of its asset purchases, don’t get your hopes up. It’s another story that the mainstream media’s using to get you in panic mode, only to forget about it in a few months and move on to another topic.

Remember how the trade war between President Trump and China’s Xi Jinping was supposed to be major threat to the economy and life as we know it? Or how about the looming debt ceilings which always seem to come and go without incident?

So now, apparently the big threat is that the Fed will slow down the rate at which it’s been buying bonds, mortgage-backed securities, and junk-bond ETF’s.

Currently, the Fed is purchasing $120 billion worth of assets ($80 billion in Treasury securities and $40 billion in mortgage securities) from banks each and every month – pretty astonishing if you think about it.

This has the effect of flooding the banking system with liquidity (cash). The asset purchases also tend to stimulate the economy in the short term, as they keep long-term interest rates down and thereby encourage borrowing and spending.

Plus, the Fed’s asset purchases and interest-rate suppression have prevented the stock market from correcting, or even dipping. Believe it or not, the S&P 500 has doubled since its lows of March 2020, establishing a record in terms of the speed of the doubling.

Moreover, the S&P 500 has now gone for more than 200 days without a 5%-or-greater pullback. A correction is typically defined as the market drawing down 10%, but we can’t even get half of that. 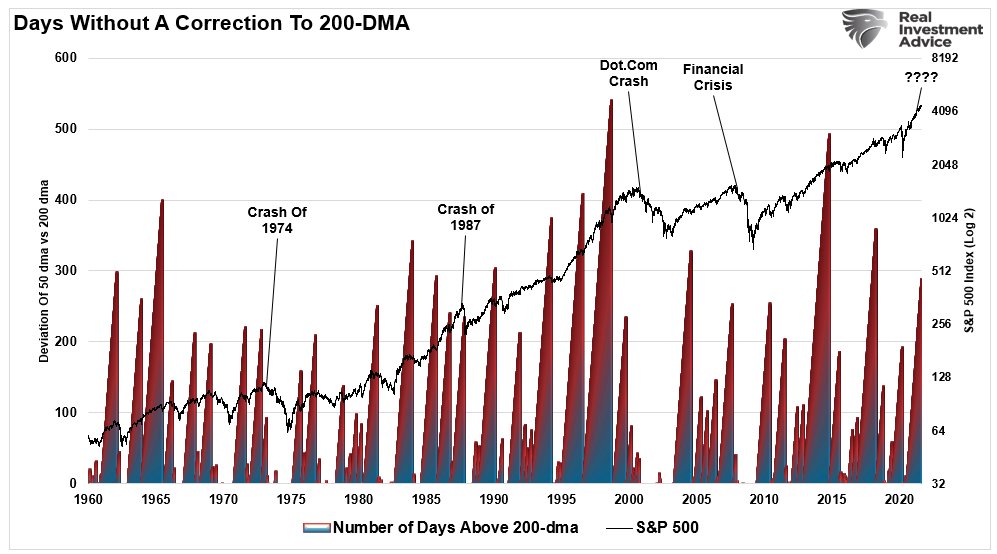 With each passing day and no meaningful pullback, the market becomes more fragile, like a house of cards waiting for a gust of wind to knock it down.

Investors are fully aware of this. So, last week’s reading of the FOMC meeting minutes – typically an event with few surprises and little consequence – had unusual import.

This time, financial traders and commentators analyzed each word of the FOMC meeting minutes with trepidation. Their greatest fear was that Federal Reserve Chairman Jerome Powell would signal a sooner-than-expected scaling back of easy-money policy.

Some hints have come from various Fed officials:

Probably as a result of all the taper talk, the markets got volatile last week simply from the FOMC minutes mentioning that most Fed participants “judged that it could be appropriate to start reducing the pace of asset purchases this year.”

Today’s investors might have short memories, but they definitely recall what happened to bond yields in 2013 when then-Fed Chairman Ben Bernanke announced a program of asset-purchase tapering.

The current Fed remembers this, too. The last thing they want is a 20% correction, which is what happened in late 2018 when Jerome Powell hiked the 10-year Treasury bond yield to 3%.

They also know that emerging markets and the Russell 2000 small-cap index have had recent corrections, and they don’t want large-cap stocks to follow in a downward spiral.

This week, Powell and other Federal Reserve officials will be speaking at a virtual Jackson Hole summit. They’re purposely going to avoid anything resembling taper talk.

There will be no big policy reveal, no surprises, nothing meaningful. And for the foreseeable future, all of this taper fear will be like the debt ceiling threats in last year’s headlines: it will come and go, and the media will move on to the next hot-button topic.