No, the Bitcoin Bears are NOT in Charge

Isn’t so funny to see the mainstream media talking heads bashing Bitcoin and other cryptocurrencies lately. These were the same commentators touting Bitcoin as “digital gold” and spouting off astronomical price predictions last year, when cryptos were climbing and there were more ICOs than you could shake a stick at.

It was also a time when the U.S. dollar was tanking: the greenback lost around 10% of its value against other major world currencies last year. The dollar has rebounded somewhat this year, but I see it more as a dead-cat bounce than a sustained move.

Most of the dollar’s price appreciation occurred in a very short span of time, from mid-April to the end of May. From a technical standpoint, there’s strong, long-standing overhead resistance with a couple of head-fakes thrown in there just to frustrate the dollar bulls out there.

But still, the U.S. dollar has ascended this year and that’s partially to blame for commentators’ distorted perception of Bitcoin’s price action. People tend to use the BTC/USD currency pair when measuring the value of Bitcoin, and they’re forgetting that the USD is not a fixed benchmark.

[contact-form-7 404 "Not Found"]
In other words, the rise of the U.S. dollar in 2018 has skewed the calculation of the BTC/USD currency pair lower, making the Bitcoin correction seem worse than it actually is. But then, it should come as little surprise that the dollar-centric mainstream media wouldn’t bother to compare Bitcoin, which it barely understands in the first place, to other world currencies.

And while the dollar is struggling with overhead resistance, Bitcoin is enjoying some nice support:

Again, there are always head-fakes in the markets, but the floor seems pretty solid here in the low $6,000’s. And again, we don’t need to compare BTC to the USD; I invite you to try a few other world currencies and see how the picture changes.

But the talking heads won’t bother will any of that: they’ve got an agenda to fulfill, and distributed-ledger technology isn’t sexy unless there’s a bubble or a crash going on. It seems like only yesterday that Jim Cramer was saying Bitcoin could go to a million dollars, but people forget these kinds of grandiose statements and commentators like Cramer count on our short-term memory loss.

I remember it quite well, though, and I also remember how Bitcoin was supposed to be “the new gold” or even “better than gold.” Bear in mind that gold also did well in 2017: 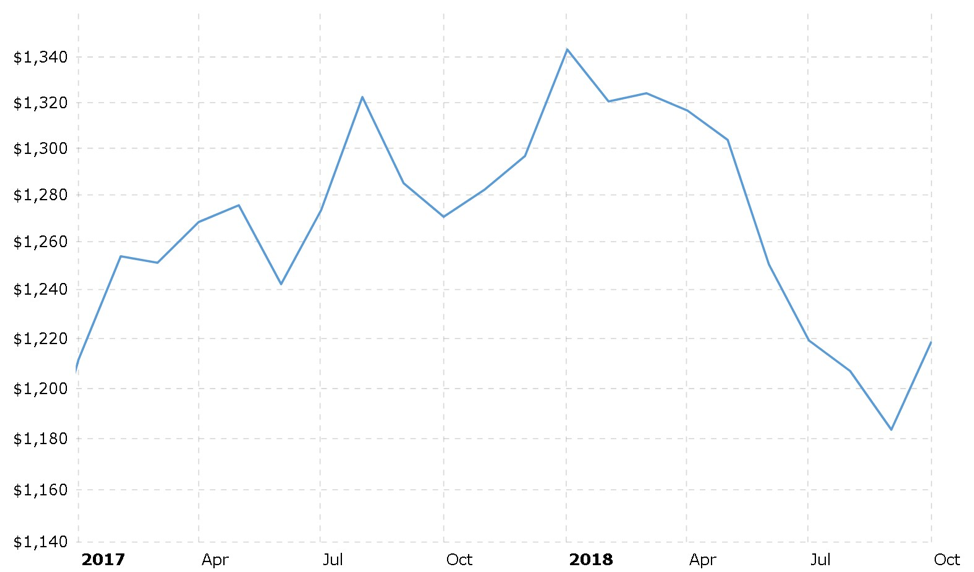 It was a much more moderate ascent compared to Bitcoin in 2017, so all eyes were on the cryptos but gold bugs certainly enjoyed the ride. Plus, the 2018 correction in precious metals has been more manageable compared to cryptocurrencies; if anything, I’d say it’s a great buying opportunity for physical precious metals as well as select mining stocks.

Besides, who says we have to pit cryptos against precious metals? With one being over 5,000 years old as a form of money and the other representing a relatively new technology, I don’t see one as being better or worse than the other; they’re just different, and that might not be a newsworthy headline but it’s the truth.

At its foundation, a bet on Bitcoin and cryptocurrencies is a bet on the world-changing prospects of blockchain technology. When World Bank President Jim Yong Kim recently bucked the Bitcoin-bashing trend and said that distributed-ledger technology has “huge potential,” he was admitting what the crypto faithful have known for years.

But hey, at least he admitted it. He also stated that “there are innovations in the technological world that can help us leapfrog generations of bad practice, generations that would take forever in terms of reducing corruption.” It’s refreshing to see blockchain advocates taking a stand, and hopefully the voices of reason will drown out the Bitcoin bears in 2019.