Obliterated and Burnt Markets: Politicians Have Lost ALL Control!

Will Fear Fade and Prudence Kick In?

When it’s time to buy stocks, you won’t want to. As high flyers fall back to Earth and even value stocks take a beating amid inflation fears, shortages of workers and materials, and a Federal Reserve that’s more hawkish than it’s been in decades.

The reason you won’t want to buy stocks at low prices is because your self-preservation instincts will kick in. The color red on your screen will induce a natural fear of capital loss, and of course the mainstream media will vie for your attention by instilling fear – as they say, if it bleeds then it leads.

Besides, it’s tempting to panic when you see so many traders hoarding cash and declaring doomsday on social media. The thing to remember during times like this is that most of the trend chasers will buy stocks near the top, only to end up selling them bear the bottom at a substantial loss.

This isn’t to suggest that your natural fear instincts aren’t useful. On the contrary, a healthy sense of fear is needed to survive the financial markets and life in general. Just as fear will prevent you from walking into a burning building, it can also keep you from over-leveraging yourself in massively hyped assets.

Having a healthy fear means being attuned to the warning signs in the economy and markets. Among the biggest red flags is the real estate market, which has overheated but is now starting to roll over. Missed payments and foreclosures are warning signs, as is the lack of affordability as young Americans increasingly give up on the dream of homeownership.

While the housing market may be the economy’s canary in the coal mine, don’t look for an actual recovery until the stock market bottoms out. When the last stock-market bull has capitulated and there are no optimists left on TV or social media, then the market will have permission to recover and so will the economy.

We’re not there quite yet, but the bear market is maturing. Both Jerome Powell and Joe Biden mentioned recession recently, with the president saying a recession is “not inevitable” while the Fed chair attempting to assure the markets that the Federal Reserve isn’t trying to “induce a recession now.”

In mid-2022, the Fed has an impossible burden of its own making: use interest-rate hikes to slow down the flow of money in order to tamp down inflation, but somehow do this without causing a recession. In the worst-case scenario, the central bank will fail in both of these mandates and thereby cause 1970s-style stagflation.

As the S&P 500 slides into an official bear market with a 20%+ drawdown, the specter of an ineffectual Fed and White House is enough to strike fear into the heart of any sensible investor. Why not hoard cash if the government is only going to further weaken an already fragile economy?

The answer is: because you’ll probably miss out on tremendous gains. While acknowledging and respecting your healthy fears, the right move isn’t to hide out all in cash (which is losing its value quickly), but to find the best values amid the wreckage and don’t worry too much about trying to time your moves perfectly. 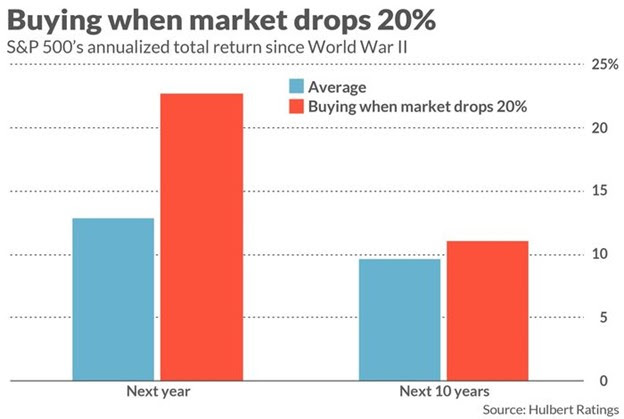 While bear markets are scary when they’re happening, the research indicates that a typical bear market only lasts for 1.4 years, and they’ve been getting shorter in recent years. It’s also been shown that since World War II, investors who bought stocks the day the S&P 500 entered a bear market have made an average of 22.7% in 12 months.

Each and every time, it undoubtedly felt like “this time is different,” but the story always had the same ending. The amateurs were shaken out of the tree, while the professionals gladly bought up the stocks that the amateurs sold at a deep discount.

As Seabreeze Partners’ Doug Kass put it, “While fortunes have been lost in 2022, fortunes may be made by those that are dispassionate and selectively buy today.” Or, to borrow a time-tested mandate from Warren Buffett, be greedy when others are fearful. This doesn’t mean that you have to live without fear, but only that you have to deploy your fear effectively and recognize the signs of a market bottom, as your contrarian outlook will be unpopular and eventually vindicated.