Gold and silver received the most attention among precious metals traders, but I believe it’s a mistake to ignore other tradable metals like palladium. One interesting thing about palladium right now is that its price against the U.S. dollar is similar to gold’s price, but don’t let the temporary price similarity mask the fact that these are two entirely different metals.

Palladium is oftentimes more expensive than gold because it’s rarer and mined much less than gold. In fact, only slightly more than 200 tons of palladium are mined annually, as opposed to 1,500 tons of gold. Denser and less conductive than gold, palladium is often used in catalytic converters and fuel cells, as well as in electronics, dentistry, medicine, and jewelry.

Also, while gold is produced by a plethora of countries around the world from a variety of deposit types, the supply is palladium is dominated by a small group of countries, with Russia and South Africa practically cornering the market: 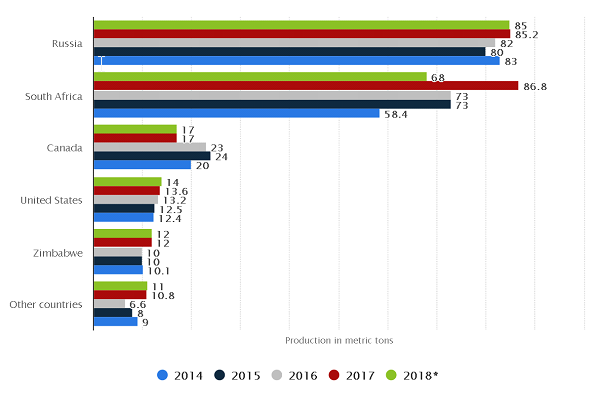 Turning to the price action of palladium, while precious metals and commodities generally have performed well in the first quarter of this year, palladium traders observed with mouths agape as it ascended from $1,300 to $1,560.40 in just ten weeks.

As a basis of comparison, it took around the same span of time for gold to go from $1,200 to $1,300. Palladium’s surge against the dollar was precipitous – and perhaps a bit overdone, as a sharp correction followed, the likes of which we didn’t see in gold or silver: 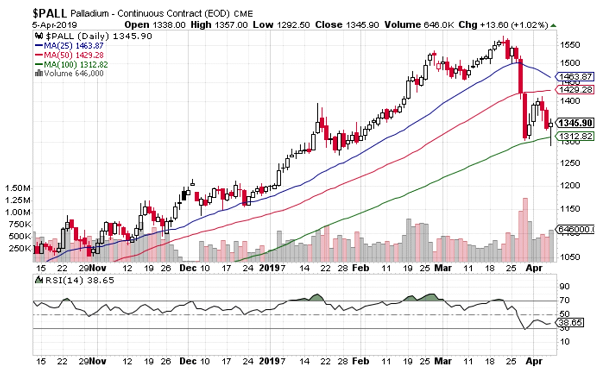 Literally two months’ worth of gains were wiped out in a matter of days: it was spectacular, or should I say spectacularly awful? I’m sure the shorts were happy, and perhaps more than a little bit responsible for palladium’s fastest decline in a long time.

Is that a coincidence? Remember, palladium is a very small market, and many traders place their stop-loss orders at these moving averages. It’s also worth noting that the RSI(14), which is the standard setting for the Relative Strength Index, bounced right off of the standard oversold level of 30, which some traders use as a buy signal.

Furthermore, you can see from the chart that the volume during the decline was tremendous: there was conviction among the sellers and shorters, at least for those few days. If the short side retakes control, another price drop could push the price of palladium down to the 150-, 200-, or 250-day moving average.

Was the price drop merely a case of palladium flying too high, too fast? Like the mythical Icarus, did palladium simply get too close to the sun, prompting an ignominious return whence it came? Or, to put it less poetically, was Ira Epstein, managing director at Chicago-based commodities broker Linn Group, correct in his assessment that “it’s the bubble that burst”?

Strategists at Commerzbank seem to think so, as they’ve expressed their forecast that palladium will enter a bear market, falling at least 20% from its recent peak, and that it will fall to $1,200 per troy ounce by year’s end. And yet, a chart from this same bank predicts a considerable deficit in palladium supply this year: 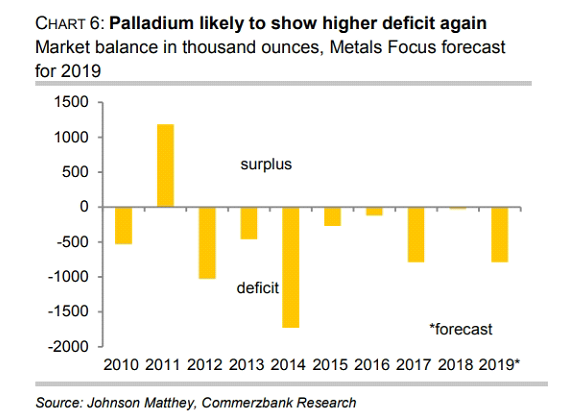 I’m fairly certain that Commerzbank isn’t prepared to make that argument, as their strategists fully admit that “no significant substitution of palladium by platinum in autocatalysts can be expected” and that “palladium offers better technical characteristics in gasoline autocatalysts.”

Zaner Metals Vice President Peter Grant is willing to adopt a more forgiving view on palladium: “I don’t think the underlying fundamentals have changed. Honestly, I think that it’s a corrective move, and probably an overdue corrective move… I think the market was long palladium against platinum and that [trade] is just getting unwound.” 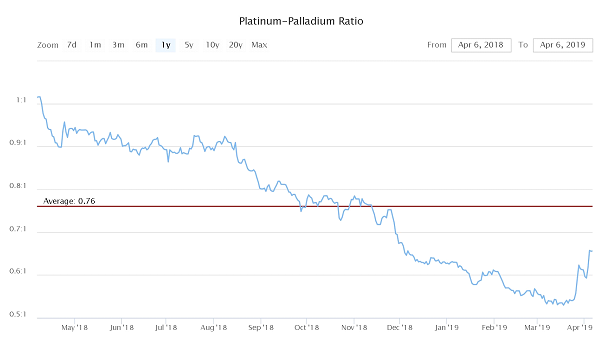 But the sharpness of the retracement, combined with the high volume, suggest that perhaps something above and beyond the typical platinum-and-palladium push-and-pull is at play here. I hate to invoke the dreaded “m”-word (manipulation), but the metals markets aren’t exactly known for transparency and the palladium market is small enough to be “massaged” by a few whales, if you know what I mean.

In case you don’t know what I mean, I’ll let Steve St. Angelo cut to the chase where I’m only prepared to mince words: “I wouldn’t be surprised if Banks or Brokerage Houses were putting out higher price targets for palladium while taking the other side as a short. This is the way the market works. It puts out the BUY RECOMMENDATION, and the SHEEP come for the slaughter.”

When in doubt, quote someone smarter than you: it’s my go-to strategy and today’s no exception. My other go-to strategy is to buy low and sell high, and if palladium goes much lower, it’ll be in my buy zone – let palladium get hammered, I say, for soon I’ll be putting the pedal to the metal.