Playing with Fire: Empathizing the Everything Bubble!

In the world of hobbies and sports, there are low-key activities like golfing and fishing and much more extreme sports with high levels of risk like rock climbing and football.

While you are still engaging in a sport, they aren’t all equal in terms of risk of injury.

To a certain degree, the world of investing is the same way. There have been times in history where you could have received a “risk-free” 10% rate of return on your investment.

And don’t think those who have been on the sidelines have been spared: not owning stocks or being in real estate has put those behind while asset prices have ballooned in the face of those not invested or simply holding dollars.

It’s funny how they call it easy money policy. In reality, there’s nothing easy about investing in a time when asset prices are already sky-high in practically every asset class.

For this bizarre scenario, we can thank (or curse) the U.S. Federal Reserve, which has encouraged/forced all sorts of speculation in the markets because they’re doing it themselves through unending asset purchases (including mortgage-backed securities, junk bond ETFs, and more).

The upshot is a skewed financial market and an unfavorable risk-to-reward scenario in which the major stock market indices have gotten so far ahead of themselves that the returns are expected to be substandard (barely above flat) over the next decade.

I get reached out to time and again by people asking me where to invest their capital for growth without excessive risk today. Their frustration is understandable, as we’re living in a bizarre time when seemingly everything is going up at the same time.

Today, because of the government’s relentless print-and-spend policy and the Federal Reserve buying up assets and keeping bond yields ultra-low (thereby making bonds un-investable), we’re seeing stocks, commodities, real estate, and cryptocurrencies simultaneously at or near their all-time highs.

It’s an experiment without precedent and it’s bound to end badly at some point. But until the house of cards collapses, it’s hard to find an investment that’s worth the price of admission. 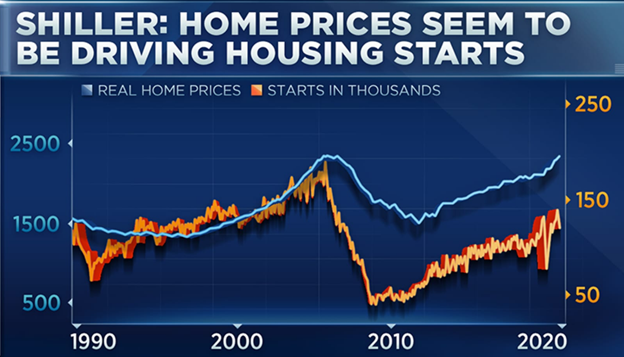 The real estate market provides a notable example of these overheated markets. As Nobel Prize-winning economist Robert Shiller, whom the Case-Shiller home price index is named after, recently warned, “In real terms, the home prices have never been so high. My data goes back over 100 years, so this is something.”

To a large extent, we can attribute the red-hot real estate market to the COVID-19 pandemic, which forced workers in the home-building industry to stop working for a while. Lumber was in short supply and home-buying activity slowed down – but only temporarily.

Now that home-buying activity is picking up again amid the reopening (along with fresh rounds of government stimulus), the demand for new homes is up but the supply hasn’t kept pace – a disastrous recipe for skyrocketing prices in lumber and other materials and the homes they’re built with.

It’s impossible to invest without speculating – or so it seems, at least. In times like these, investors have to think outside the box, and more specifically, outside of government-promoted securities.

If anything’s investable now, it could be cryptocurrency. Sure, Bitcoin had a massive run-up to nearly $65,000 earlier this year, but unlike most other asset classes, there’s been a sharp correction, and this could provide an attractive entry point.

Sure, there’s the possibility that Bitcoin could fall into the zone of $20,000 and $30,000, but that’s not the time to panic. If anything, it would be the time to pull a Warren Buffett move and add to your position (or start a new position) at an even more favorable price point.

There are other strong buys in the markets besides Bitcoin, though it’s like finding needles in a haystack.

I plan to release information and coverage of a number of sectors that are still undervalued and offer both growth and safety amid a falling dollar environment.

Maybe the “everything bubble” actually has room for a few pockets of high-conviction investable assets… the challenge is knowing where to find them and then seizing the opportunity.