For over a decade, and even through COVID-19, financial market traders lived in an upside-down world where terrible news was greeted with frenzied buying activity. Like Pavlov’s dogs, investors were trained to buy every dip because bad news was good news – but in 2022’s second half, it looks like a reversion to reality is afoot.

Historians will undoubtedly look back at the post-financial-crisis era as a strange and almost inexplicable time for the U.S. equities market. Negative data from the government and corporations meant that the Federal Reserve would buy more bonds from banks, thereby injecting the banking system with billions of dollars.

The bad data also meant that the Fed would continue to suppress government bond yields. Since retirees and 401(k) fund managers couldn’t get much yield from bonds that pay a measly 1% per year, they were forced into a risky stock market. As the old saying went, “TINA” – There Is No Alternative to owning stocks.

Thus, the mainstream financial press was able to spin negative news into positive news, and the central bankers at the Federal Reserve could continue to keep the proverbial plates spinning for so many years. The problem with print-and-spend policy, though, is that increasing the money supply is bound to result in rampant inflation.

Investors had to look to alternative media sources for timely warnings about the consequences of dollar devaluation. The government’s response to COVID-19 only added fuel to the inflationary fire as more billions of dollars were printed up and spent on stimulus/relief/bailouts to keep the voting public as dependent as possible. 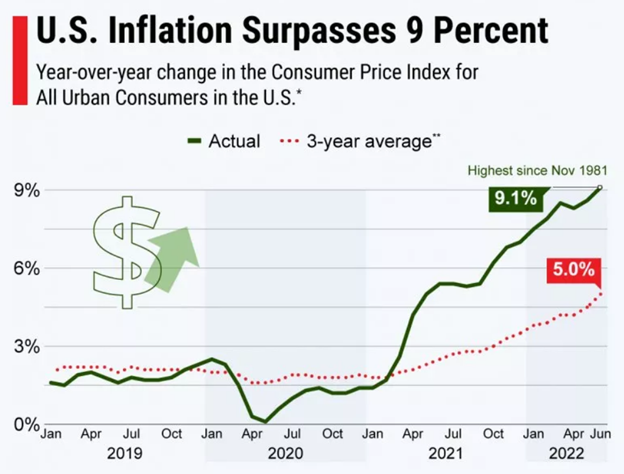 Even prior to the first 8% CPI print, we provided plenty of warnings about the implications of the Fed’s stubborn policy errors. Even after three consecutive monthly 8%-or-higher inflation readings, career politicians and media puppets tried to keep the public calm with talk of “peak inflation” that would soon subside.

Well, it hasn’t peaked or subsided. It was only a shock to the inflation deniers that the Consumer Price Index jumped to 9.1% in June. Folks who’ve been reading my newsletter saw this coming from a mile away, and have been preparing for it and profiting from it.

Then, in the wake of the red-hot CPI reading came an 11.3% print for the Producer Price Index (PPI), which measures the increase in what domestic producers get paid for their output. If they’re getting paid more to produce goods, you can be assured that the prices of those goods are definitely going up.

So now, the Fed is painted into a corner and there’s really no escape. If the central bank doesn’t take aggressive action, high inflation will persist and the economy will go into a tailspin – and the Federal Reserve certainly doesn’t want to be blamed for failing to act.

On the other hand, raising interest rates by 75 or 100 basis points is bound to have a stifling effect on large-cap stock market indexes. It’s an unfortunate dilemma for the Fed to be in, but it’s the inevitable result of years of willful policy errors.

This doesn’t mean that you have to just sit on the sidelines and watch this tragedy unfold, however. The TINA cliché shouldn’t be taken literally, as there are actually alternatives to risky stock market index funds. After all, gold and silver have endured through times of crisis, and they’re available today to add stability to just about any portfolio.

From instability and volatility come opportunity, and the opportunity today is definitely with gold and silver. If you’ve been waiting to start or add a position, there’s really no better time than now as gold touches $1,700 and silver hovers in the $18’s.

Best of all, you don’t have to place your trust in the government with gold and silver, like you would with Treasury bonds. And, even if stocks representing large corporations wobble, you can still hold gold and silver in your hands – while real value is tangible, the Fed’s words and actions are just laughable.