Retail Stock Trading Volumes Are Exploding. Will the Market Be Imploding?

I recently heard a quip that discount brokerage apps are the Pokémon Go of 2020. That’s pretty funny until you realize that it’s actually true. Too many neophyte investors are treating stock trading as if it’s a game. So, what’s the endgame?

If anybody loses, it won’t be the institutional investors. They’re trained to buy whatever the retail traders are selling, and that strategy tends to work out well. Thus, the amateurs tend to panic-sell at the bottom and start buying at much higher prices, while the smart money does the complete opposite.

The onset of the coronavirus only exacerbated this trend. Stuck at home, the amateurs took to their phones and laptops and started trading out of boredom, which is one of the worst things you can do if you actually want to make money.

But here’s the thing: since the market bottomed out in March, amateur investors haven’t been punished for making poor choices. Purposely misspelling stocks as “stonks,” braggarts on Reddit are claiming with a straight face that “stonks only go up.”

Since March of this year, and since March of 2009 (coincidentally enough), they’ve been mostly right in saying that stocks only go up. It’s really only been a handful of tech stocks that have propelled the markets relentlessly higher, but index fund investors don’t feel how lopsided those indexes really are. 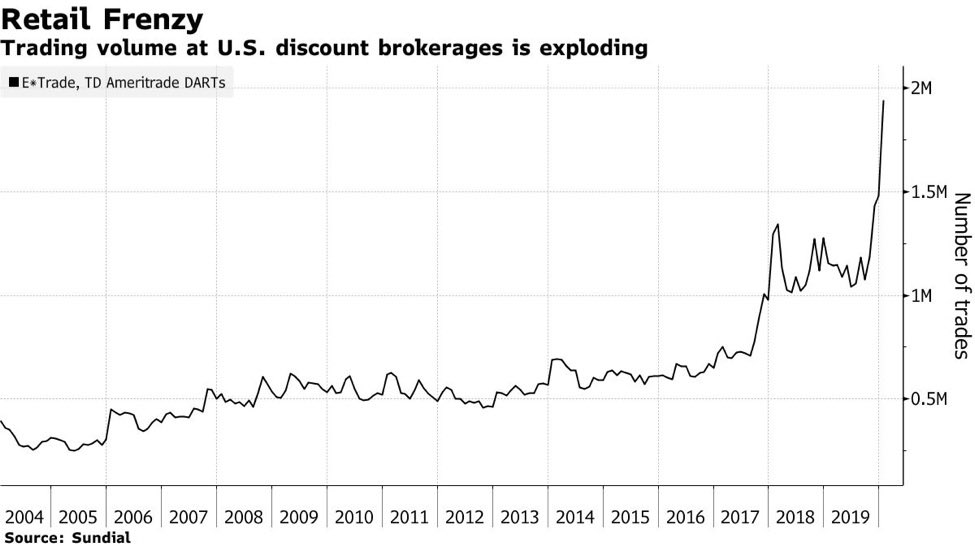 The chart above illustrates how trading volumes have gone parabolic in 2020. Retail investors haven’t been punished (yet) for being bad stock pickers because they’re piling into the same names, thereby pushing the share prices up irrespective of whether the companies are actually profitable or not.

It’s a weird scene, watching traders furiously bidding up the share prices of bankrupt companies like Hertz or Whiting Petroleum, or scandal-plagued companies like Nikola or Luckin Coffee. Or else, they’re grabbing shares of brand-new IPO’s like DoorDash or Airbnb even after the stock price doubled on the first day of trading.

Sometimes I’m actually tempted to buy these stocks simply based on the “greater fool theory,” meaning that I’d be a fool to buy the stock but I know I’ll be able to sell it at a higher price to some greater fool. I don’t actually use this as a strategy, but it’s crossed my mind.

To make it even worse, they’ve recently discovered riskier and more advanced trading instruments like call options and triple-leveraged ETF’s. It’s starting to look more and more like early 2000, when hardly anyone thought that dot-com stocks were capable of crashing.

Actually, depending on how we measure it, the current situation could actually be worse than it was in 2000. While value stocks have been all but ignored this year, the price-to-sales ratios of so-called growth stocks have catapulted past the most euphoric peak of the dot-com era.

So, where does this leave informed, clear-headed investors like you and me? Sure, you might be tempted to jump on the retail-frenzy bandwagon now, since it feels like the inmates are running the asylum and there’s no point in trying to trade against the madness of the crowds.

You can give into the irrationality if you so desire, but I certainly wouldn’t recommend it. The worst possible position for an investor is to be the last one to jump on a late-stage trend. And always remember, markets go down much faster than they go up.

Instead, you might consider sticking to the same principles that served your father and grandfather well: think long-term, invest in companies rather than “stonks,” and be wary of crowds as they’re eager to leap but disinclined to look first.