You might have heard the old tale of the frog in the boiling pot of water. With effort, the frog could jump out of the hot water but chooses not to because it’s only moderately warm at first. Yet, the heat is turning up and the frog, refusing to acknowledge his predicament or act on it, gradually boils to death.

It’s a gruesome tale and we might not want to make the connection between the boiling frog and America’s financial predicament. With the major stock market indexes hovering close to all-time highs, it’s tempting to bathe in the warm, soothing waters of bullish sentiment and easy-money policy.

But what makes us feel good now can, slowly but surely, destroy us over time. The same ultra-accommodative Federal Reserve policies that have kept the market indexes afloat for a decade, are now undermining the American consumer, which is the lifeblood of the economy.

While in my office watching Fed Chairman Jerome Powell’s recent speech at the Jackson Hole symposium underscores the central bank’s unwavering commitment to Wall Street largesse over the consumer’s well-being. In complex, euphemisms, Powell reaffirmed his willingness to let inflation run hot regardless of the consequences.

“If inflation expectations fall below our 2% objective, interest rates would decline in tandem,” Powell said at the symposium. “In turn, we would have less scope to cut interest rates.” And that’s the crux of the matter: the Fed refuses to relinquish its ability to slash bond yields and thereby keep the stock market intact for another year.

And so, there will be no “risk-free yield” as retirees and savers will gain practically nothing from parking their money in a government bond, certificate of deposit, money market or savings account. At the same time, inflation will, by decree, stay above 2% for extended periods of time.

This, unfortunately, is the “new normal” of the markets now and the Robinhood crowd has been conditioned to buy every dip because they think the Fed’s got their back. With that assumption, amateur traders have been devouring shares of practically every tech name, including some companies that have negative earnings.

As we’ve seen in the first couple of weeks of September, though, the same tech stocks that disproportionately buoyed the market can also lead its decline. Since it bottomed out in March, the stunning stock market rally has been led by a small handful of tech names, even while the majority of S&P 500 stocks remain below where they were at the February 19 peak.

As Brad Neuman, Alger’s director of market strategy, put it, “Wall Street isn’t a mirror of Main Street… The stock market has a much smaller weighting to the areas of the economy that have been hurt the most, like malls, hotels and airlines.” 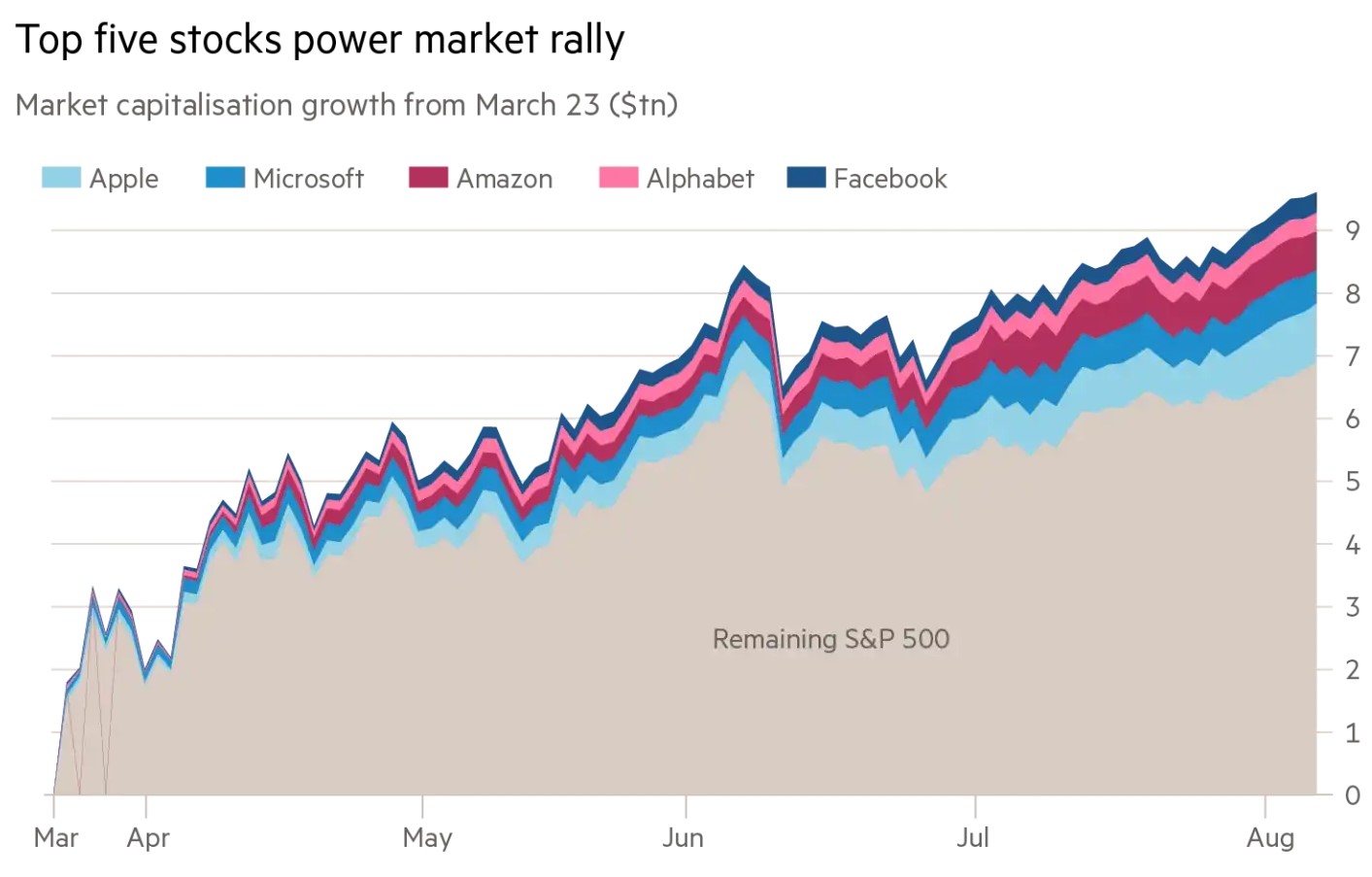 While the FAANG names get fatter, middle-class America is left to fend for itself. Hence, the trend towards minimalistic lifestyles: scooters and ride sharing instead of car ownership, tiny homes, renting instead of buying – this is the Main Street reality and it’s starkly divergent from equities prices.

And don’t expect the Fed to help the Robinhood traders if those few tech stocks crash, not unlike what took place in 2000. Powell doesn’t see his role as a champion of the people; he’s beholden to a small number of well-heeled financial interests whose names you’ll never know and whose faces you’ll never see.

Unless you’re in the central bank’s inner circle, consider yourself as a frog in boiling water and take action.

I am preparing another shopping list for my readers that will be geared for post-election investing as I do expect the waters to be potentially very choppy as the time approaches.