Russian Stocks in Free Fall: Is This a Bargain or a Value Trap?

Most U.S.-based investors have probably never owned Russian equities before, and the thought of starting a position now might be intimidating. However, it’s not as difficult as it might seem – but first, you’d have to determine whether there’s a favorable risk-to-reward proposition in Russian stocks now.

Let’s start off with some fast facts. The primary Russian stock market index is known as the MOEX Russia Index. It tracks the performance of the 50 largest and most liquid Russian companies from 10 main economy sectors, listed on the Moscow Stock Exchange. It is a capitalization-weighted composite index, akin to the S&P 500.

As of February 28, the Russian stock market in Moscow was closed, but U.S.-based Russian exchange-traded funds (ETF’s) were available for trading in the U.S. We’ll take a closer look at them in a moment.

There is some tracking-error risk here, since the Russian ETF’s are trading even while the underlying securities aren’t. As a result, market participants have to make estimates of the value of the underlying securities. This has a historical precedent from a several years ago, when Greece’s market was closed for six weeks but Greek ETF’s in the U.S. continued to trade. 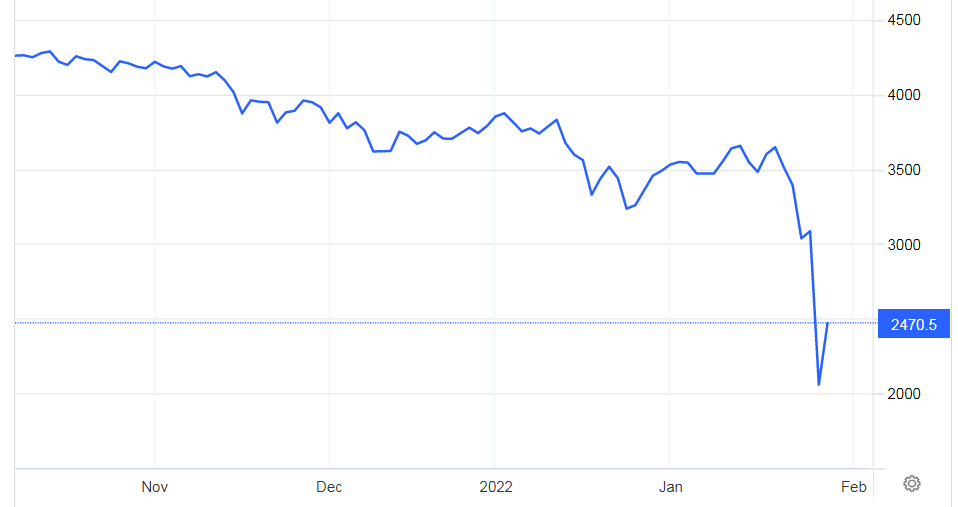 Bear in mind that buying Russian stocks would mean, in effect, getting exposure to Russia’s economy. This is a risky proposition due to a confluence of a number of recent events:

The freezing of reserve assets could actually have the greatest impact of all these factors. Vladimir Putin’s government has spent the past eight years preparing Russia for tough sanctions by building up $630 billion in international reserves, including currencies and gold.

Of course, gold will always have enduring value. However, at least some of Russia’s financial reserves are now frozen and Putin’s “fortress economy” is under unprecedented assault.

Still, if you’re willing to adopt a “This, too, shall pass” attitude in regard to Russia and Ukraine, there may be an opportunity here. There aren’t many individual Russian stocks that are worth recommending now and are also easy to trade on the U.S. markets, but there is the VanEck Vectors Russia ETF (ticker symbol RSX), the chart of which is shown above.

The VanEck ETF does a good job of tracking Russia’s stock market, and millions of shares are traded every day. This means that liquidity won’t likely be an issue, and you should be able to get in and out of RSX easily enough.

Another highly liquid fund is the iShares MSCI Russia ETF. That fund’s stock ticker symbol is ERUS, and it’s fairly affordable as it recently traded under $20 per share.

If you insist on taking a chance on individual Russian stocks, then you might try Ozon (ticker symbol OZON on the NASDAQ exchange). Ozon is an e-commerce company that’s been called the Amazon of Russia. It’s a thriving business, with over a million orders per day recorded on Ozon’s platform in Q4 2021.

Only consider these equities if you’re prepared to accept substantial risk of capital loss. There’s also the potential for a bounce-back if the Russia-Ukraine crisis is resolved soon – which, for all I know, might or might not happen.