Stocks have been in a rip-roaring bull market. A historical bull market on unprecedented artificial stimulus. The market is one of the most phoniest and inflated aspects of our economy, but I believe it to be very managed and will continue to be until natural law takes its toll.

The stock market is seemingly hinging on every word of the Trump presidency. We are seeing this week, stocks getting slammed out the gates. As Chinese tariffs talk escalated, with the president threatening to raise tariffs on $200 billion dollars of goods increasing current them from 10% to 25%, the traders on Wall Street getting nervous.

The stock market has been the lifeline and propaganda propeller that has glued the economy together. For the 10,000 baby boomers that are retiring daily, this is life support for a massive generational wave that’s retiring and dependent on elevated asset prices… That is, of course, if they managed to save money for retirement in the first place.

70% of the wealth in the U.S. is in the hands of baby boomers, and these baby boomers are cheering for Trump to keep the momentum moving along…

In my opinion, Trump’s reelection will largely depend on the ongoing stability in the stock market. Although completely due for a massive correction, if the stock market manages to stay afloat into the 2020 election, I believe Trump will win 2020 and retake congress in the process…

We are at EXTREMES in the world of politics like never before… Socialist poison has become the new cool trend, especially among millennials.

During the next stock market crash, I expect socialism in America to gain exceptional ground to a degree our nation has never seen.

The mecca of today’s populism, not unexpectedly, is California, where regulators like Governor Gavin Newsom are calling for a “data dividend” in which collectors of third-party data (Facebook, Twitter, Instagram, Google, Amazon, etc.) would be required to redistribute some — or possibly even all — of their data-derived profits to their users.

Unbelievably, these career politicians are calling it a “data dividend,” as if it were earned income, but it’s a sign of the times in a new economy where far-left politicians would rather battle the progress of artificial intelligence (a battle they cannot win, of course) than encourage tech innovation.

Among other things, in a twist of irony, this is the type of misconceived, agenda-driven politicking that could very well hand Trump another four years as president. Business-friendly, anti-regulatory policy has given American stock market investors fresh highs amid projection-topping GDP growth and an unemployment number that hasn’t been seen since the late 1960s.

Trump is not shy about goosing the stock market as 2020 approaches: his tweets have made it crystal clear that he expects Jay Powell to sit on his hands (or perhaps even start cutting rates) in order to send stocks skyward like a “rocket ship.”

Let’s not kid ourselves: it’s awfully difficult to unseat a presidential incumbent when stocks are rising. The latest Gallup poll numbers show this, with Trump’s approval rating for handling the economy currently up 4 percentage points since February to 56% – nearly equaling Obama’s 57% at the end of his tenure. 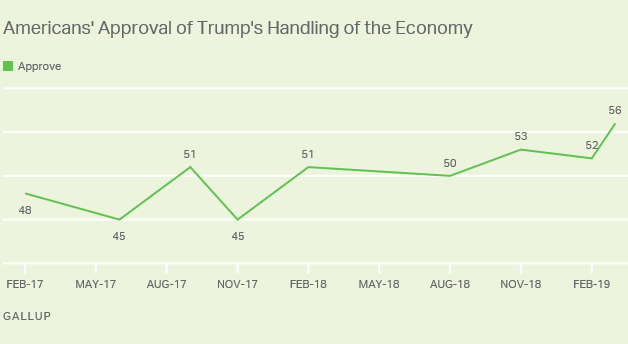 This represents the highest approval rating of Trump’s presidency, and it’s no coincidence that the approval ratings chart largely matches the trajectory of the stock market: for the time being, at least, investors are celebrating the President’s anti-regulation stance.

Seizing the opportunity to comment on his latest approval rating, Trump specifically cited the pro-business formula that has supported the stock market throughout his presidency thus far: “cutting taxes, cutting regulations and many other things.”

On top of the fact that the Mueller Report was a complete and utter upset for Democrats, Trump is seeing momentum build in such a way that it’s making him an unstoppable force of nature.

In my opinion, one more year of market melt-up equals four more years of The Donald in office.

My hope is that there will be some sort of reversal from the ever-expanding government behemoth, which I find to be highly unlikely regardless of Democrat or Republican leadership and as I said earlier, be prepared for double-stuffed socialism after the next market crash comes.

During the next market meltdown, we will see irreparable policies implemented that will propagate socialism into the fabrics of our society like the U.S. has yet to fully see out of sheer frustration in the status quo.

As for me as an investor, things haven’t changed. I’m hedged on multiple fronts as I hope you are too. I’m exposed for upside in the markets, and I’m hedged with precious metals and positioned in growth sectors, such as A.I., cannabis, and blockchain tech. I suggest people also strive to gather multiple streams of income.

And in all honesty, the more insulted you are, the less all of this “mess” will matter to you in the end because you’ll be above it.