September Is the Worst Month to Hold the S&P 500

In 2021, the first full trading week of September was not one to remember – or not for the perma-bulls, at least. With economic uncertainty looming, the seemingly unassailable S&P 500 suffered five consecutive down days.

Some pundits might blame the previous week’s poor jobs report for this. As you may recall, non-farm payroll growth in August increased by just 235,000, a deep disappointment compared to the expectation of 720,000.

Bank of America economist Joseph Song cited issues within the economy, observing that “companies paused hiring in the face of weaker demand and uncertainty about the future while workers withdrew due to health concerns.”

Moreover, the labor force participation rate remained unchanged at 61.7% – still below the 63.3% marked in February of 2020, prior to the major onset of the Covid-19 pandemic.

Throughout much of the summer, negative developments would be construed as positive by the financial markets. Disappointing data just meant more accommodative support from the Federal Reserve, after all.

But now, the “bad news is good news” narrative appears to be breaking down. With that, September is threatening to be the S&P 500’s first losing month since January.

Of course, there’s no guarantee that this will actually happen. Hordes of retail traders, along with institutional algorithms, have been conditioned like Pavlov’s dogs to buy each and every dip regardless of the surrounding circumstances.

Will the plunge protection team pull out another stick save this time around? It’s hard to say, as they’re fighting an uphill battle now. 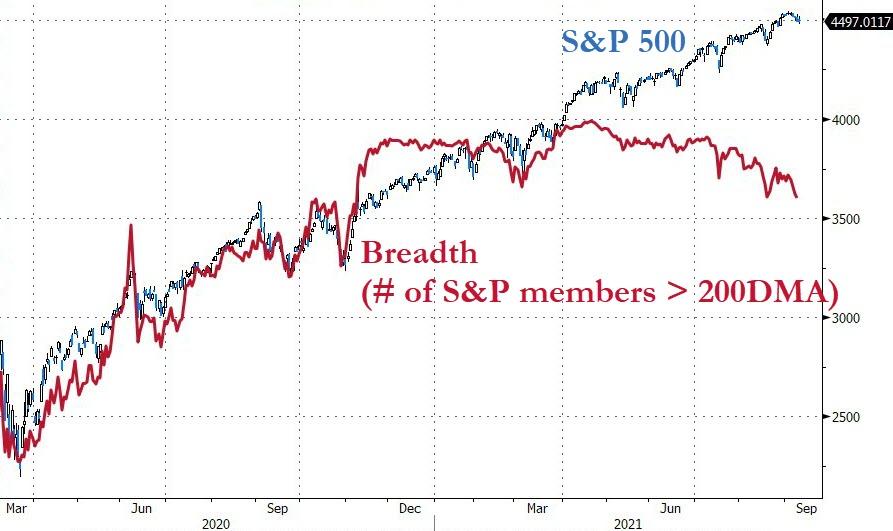 The bulls certainly don’t have market breadth on their side. Just a handful of high-flying tech stocks are propping up the market at the moment, while the vast majority of S&P 500 stocks are underperforming.

You can see in the chart above that the “jaws” are opening, and they always shut sooner or later. This will either be resolved by hundreds of stocks suddenly performing a lot better, or by the price of the S&P 500 index coming down.

When the market has “bad breadth” like it does now, we can start to see cracks in the armor. For instance, the entire market tumbled just because one company, Apple, had bad news on September 10.

Specifically, a federal judge ruled that Apple will no longer be allowed to prohibit developers from providing links or other communications that direct users away from Apple in-app purchasing.

Don’t get the wrong idea – this isn’t the end of Apple or anything like that. Rather, it’s just an example of how fragile the broader market is, since one company’s misfortune can bring down the whole house of cards.

The fact is, despite the Federal Reserve’s best efforts to shore up the stock market, reality has to set in at some point. It won’t be Apple’s short-term problems that finally knock the S&P 500 off of its pedestal, but more likely a preponderance of evidence that all is not well in the economy.

Just to cite one of many troublesome statistics, the producer price index (PPI) surged by 8.3% year-over-year in August, marking the highest annual rate of increase since at least 2010.

This suggests that, despite the Fed’s narrative that inflation is “transitory,” it’s likely to persist and even worsen over the coming months. 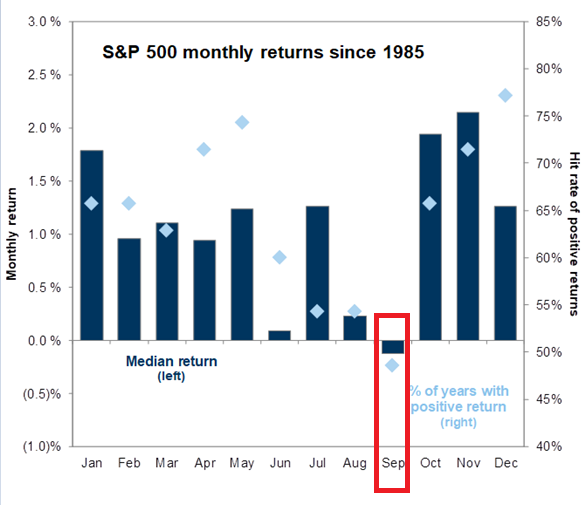 On top of all that, long-side investors will have to swim against the tide of seasonality. Going all the way back to 1985, September has been the worst-performing month and the only negative one, on average, for the S&P 500.

The month’s first full trading week may have been a warning shot, portending worse things to come. And let’s not forget about what can happen in October – lest we forget, there were October market crashes in 1929, 1987, and 2008.

This explains, to a certain extent, why some index-fund investors choose to “sell in May and go away, and don’t come back ’til Halloween day.”

There’s no need to sell everything you own. However, it’s perfectly okay to lighten up on your index-fund holdings, if you happen to have any.

Besides, some market sectors are actually looking quite good at the moment. Uranium has really been perking up lately, which is understandable as nations around the world are seeking cleaner energy sources.

At the end of the day, just be aware of the data that’s out there – the good, the bad, and the downright nasty – and adjust your investment strategy accordingly.