Should You Join the Reddit Army and Buy GameStop Stock?

It’s exciting to consider the possibility that a band of message-forum rebels could topple the stock-market hegemony of institutional short sellers like Citron and Melvin Capital. Not only is there an exhilarating sense of justice in this, but also some potential investment opportunities.

For generations, the hedge-fund “whales” have ruled Wall Street with an iron fist. Sure, there are many more amateur retail traders than institutional investors, but the whales control massive amounts of capital and they’re better organized and coordinated than the disconnected retail investors.

Yet, that changed with the advent of online message forums as these platforms empowered small-scale traders to connect and build a collective force that could rival even the most powerful hedge funds.

The most prominent among these platforms is the Reddit group known as Wall Street Bets. This subreddit has been around for years, but in January the online group was thrust into the spotlight as mainstream-media financial news platforms caught on to the story.

And it is a compelling story with a David-versus-Goliath angle to it, but my concern is that retail investors will get swept up in the hype without really knowing what they’re doing. As always, wealth should be accumulated over time and it’s hardly ever a good idea to go all-in on one or two trades.

It’s difficult to convince people to be cautious nowadays, though, since stocks like GameStop (GME), AMC Entertainment (AMC), and BlackBerry (BB) have gone up hundreds of percentage point within a matter of weeks or, in some instances, just a few days.

The problem here is that these are legacy companies whose best days are likely in the rear-view mirror. Not too many people own BlackBerry phones since smartphones are the norm; video-game enthusiasts typically download or stream games instead of going to GameStop stores; and a combination of Covid-19 and Netflix have put AMC’s continued existence in jeopardy.

And so, you’ve got companies with poor financials but their stocks have posted multi-bagger gains. This says more about the state of the market than the companies themselves as the divorce between share prices and fundamentals has evidently been finalized.

It’s actually gotten to the point where a number of major brokerages have reported technical difficulties and outages due to the high trading volumes. Ally and other popular brokerages were reportedly paralyzed as their trading platforms went down in the midst of a Wall Street Bets-fueled frenzy.

For folks like me who have been in the investing game for a long time, this is quite unsettling. There’s an old saying when you see taxi-cab drivers giving stock tips, it’s time to be cautious. In 2021, it’s not just cab (or Uber) drivers anymore as seemingly everyone’s getting into the trading game.

In a sense, it could be said that they’re winning. David Kostin and the equity strategy team at Goldman Sachs recently reported that “A basket of retail favorites has returned +17% YTD and +179% since the March 2020 low, outperforming both the S&P 500 (+72%) and our Hedge Fund VIP list of the most popular hedge fund long positions (+106%).” 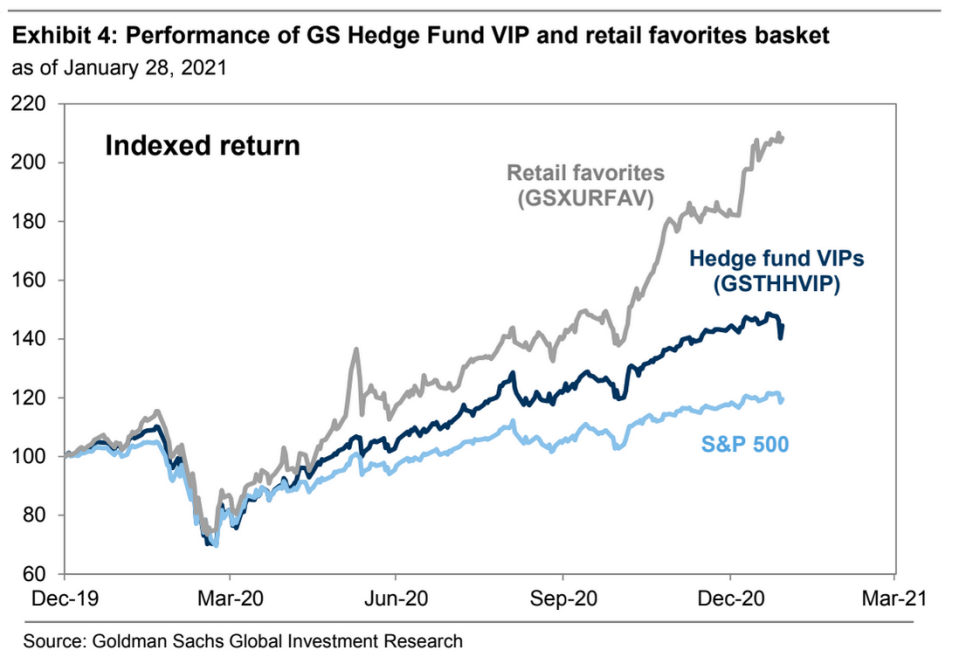 My issue is that winning can easily morph into complacency. I suspect that the memory of the 2000 tech wreck and even the 2008 financial crisis are far enough in past now that investors are forgetting the painful lessons of over-leveraging and market gravity: what goes up too high will eventually come down.

This has led to a spate of analysts trying to find the “next GameStop,” but they’re neglecting to mention that GameStop stock crashed nearly as fast as it ascended. Unless your timing was impeccable or you were just lucky, chances are good that you didn’t reap the GameStop stock gains that the media’s been touting.

Besides, it’s going to be difficult for the Reddit army to replicate its success now that everybody’s watching them. After a secretive movement like Wall Street Bets goes mainstream, it typically loses its influence after a while as people figure out and replicate its patterns and methodologies.