Spring-Loaded PROFITS – This One Will FLY!

MEGA Growth Stock That Will Defy the Cycles of the Market

As my readers are already aware of, we are spring-loaded to the upside for growth in resource stocks, cannabis companies, blockchain tech, and even artificial intelligence.

For these sectors, we are dependent on the trends, namely a defined turnaround in precious metals and blockchain and a continuation of the trends in cannabis and A.I. And personally, I couldn’t be happier with the positions that we have in these companies, and I believe fortune will favor the bold in every single one of these trends.

But many are worried about the amount of time it will take for gold stocks to turn around or that an overall correction in equities makes investing in 2018 a potentially bloody situation.

Today, however, I’m introducing my readers to Koios Beverage Corp. (CSE: KBEV & OTC: KBEVF) because it’s a sheer hypergrowth play. With this play, we aren’t dependent on a specific market to profit from, but sheer company expansion that I believe will traverse up, down, and sideways markets.

It’s easy to forget that even in the worst of times, opportunities have always presented themselves.

Consider the 2008 financial crisis where the S&P 500 crashed, falling 56.4% from top to bottom. Hasbro, one of the surviving S&P companies, specifically in the U.S.-based toy manufacturing sector, actually rose by 16%. Not only them, but also H&R Block, which rose 20%, car part retailer AutoZone, up 18% that year, and Walmart, which gained 17.4%.

It’s the reason I have taken a strategic, long-term position in Koios Beverage Corp. (CSE: KBEV & OTC: KBEVF), a 20-cent stock that could absolutely obliterate the returns mentioned with these already saturated and limited upside businesses.

You might be asking, “What is Koios Beverage Corp.?” It’s a premier developer and distributor of nature-based products that boost brain function, enhance health, and improve productivity. Koios has the unique ability to produce, market, and distribute the finest and healthiest beverages throughout North America.

Their presence is expending and very impressive!

With a focus on the North American health beverage market, Koios has an available distribution network of over 2,000 retail locations, allowing the firm to market and sell their nootropic-infused drinks to a wide consumer base. No other company has a network this large in the nootropic space, with distributors representing over 80,000 brick-and-mortar locations, as well as a very strong online presence.

There’s an industry that’s on the decline, and if you’re invested heavily in it, you might consider pulling out sooner, rather than later. I’m referring to the soft drink market, especially where beverages filled with sugar and caffeine are sold. Sure, this market used to be a relatively safe bet, but the public’s attitudes and habits are changing, and your investing strategy will need to change as well. 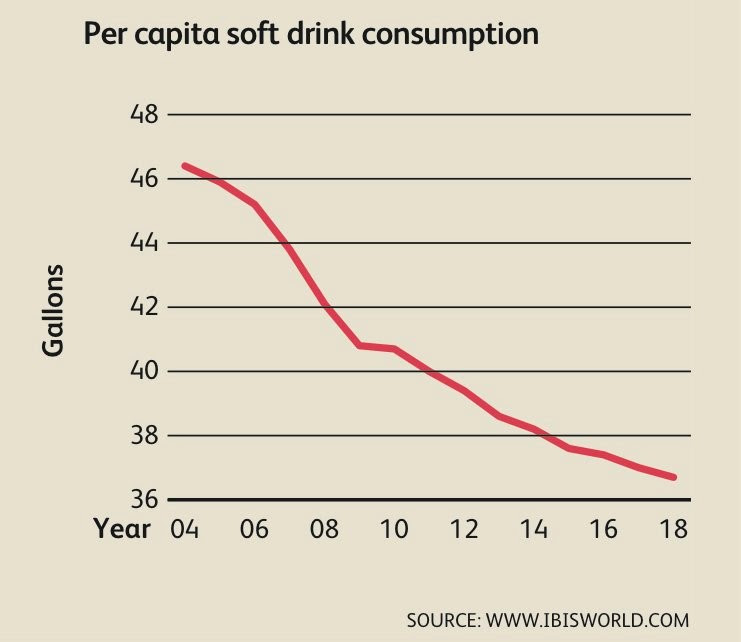 t’s getting ugly in the world of sugary soft drinks, as people are becoming more health-conscious and consumers become more mindful of how their drinking habits can cause diabetes, weight issues, etc. People aren’t just going to consume unhealthy beverages like they used to, and money they once spent on soft drinks is now going to flow into another sector of the market.

Specifically, it is going to flow into non-traditional, healthier alternatives to soft drinks. Most people don’t just want to drink plain water all the time, so if there’s a company that can deliver tasty and nutritious beverages to a large consumer base, they will make real money, and so will investors.

This is the reason I’m taking a position in KBEV!

Massive sales increases in Koios’s nutritious beverages are a reflection of the firm’s amazing innovations in the industry. In particular, Koios has developed something that no competitor has: a suite of beverages with a proprietary blend of nootropics. Nootropics are supplements or other substances that improve cognitive function – specifically executive functions, memory, creativity, or motivation in healthy individuals. In addition to improving memory enhancement, nootropics are also commonly used to improve or treat mood and depression, attention and focus, anti-aging, enhanced sleep, and reduce anxiety.

This is important because the nootropic market is exactly where investors need to be positioned right now. The expansion of this market will be swift and massive: 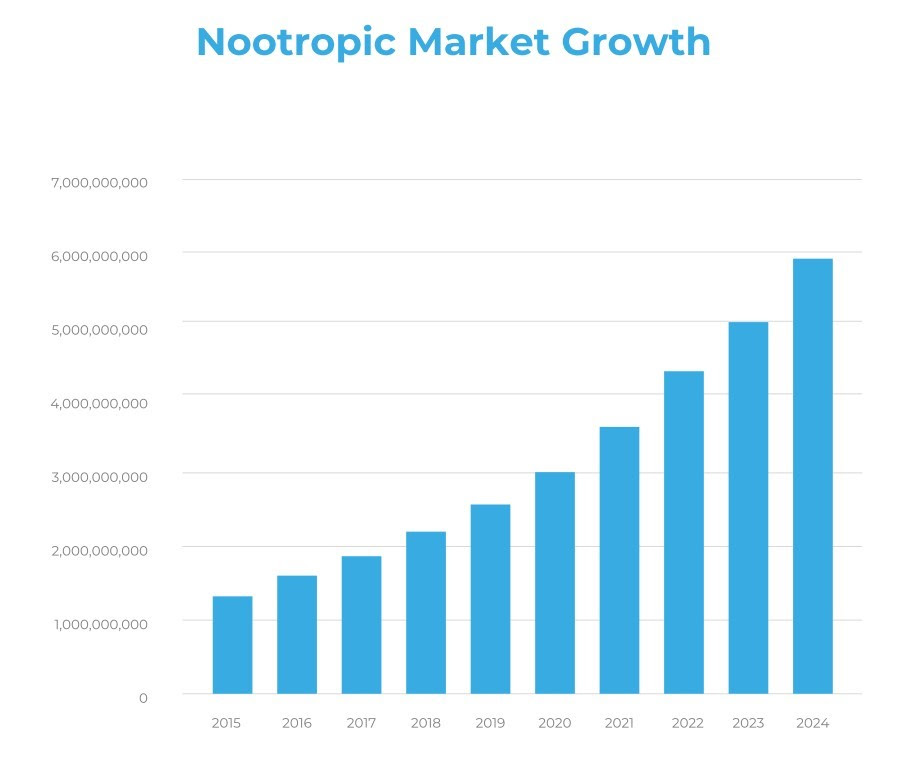 This massive distribution network just got even bigger, as Koios recently announced that they have signed an agreement for ongoing sales and distribution of their products with Wishing-U-Well, a Colorado-based distributor that is one of the largest retailers of health-based products on the Amazon online retail platform.

Our analysis has proven that Koios has a set of competitive advantages to take this company to the top: niche products in high-growth categories, diverse product lines, expanding retail presence, a low market multiple, and the capacity to sell to major retailers, natural food chains, and sports nutrition chains, thus providing the opportunity for over 100,000 locations. All told, their sales team projects that Koios can attain 1,200 new accounts over the next 15 months. 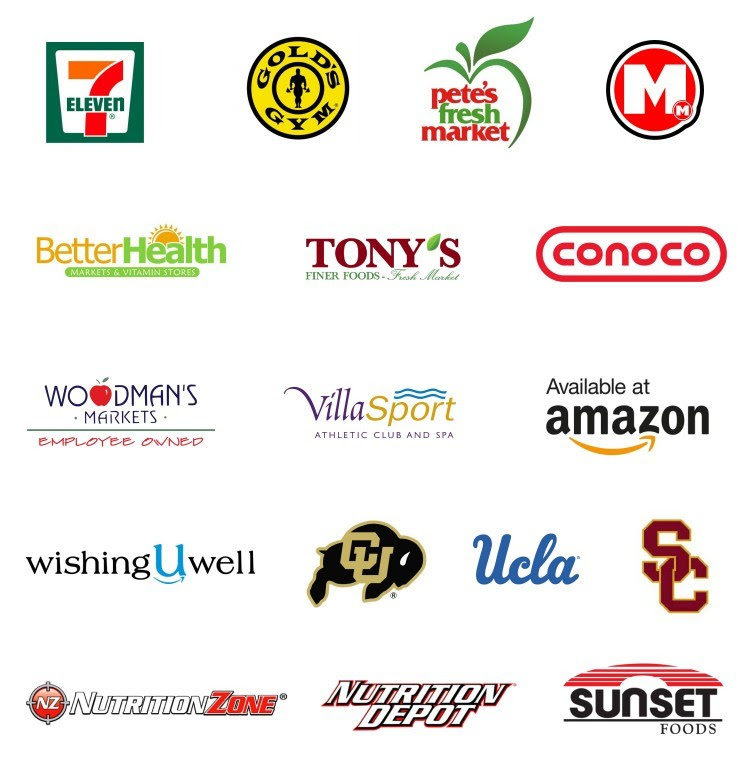 This is not a pie in the sky pipe dream opportunity.

Even though it’s trading like a ground-floor opportunity, this company has hit the ground running and is just being throttled up.

Natural, organic, clean, and healthy; much like the company itself, the product offerings of Koios Beverage Corp. have all the ingredients of a blockbuster success.

The fact that this is still a 20-cent stock is honestly mind-blowing, in my opinion, which is why I’m alerting my readers now before the market starts to price in what sort of potential is down the pipe, along with everything that has been solidified up until now. It’s the reason why I have taken a strategic, long-term position in Koios Beverage Corp. (CSE: KBEV & OTC: KBEVF).

Tomorrow , I will reveal more about the company that is an absolute game-changer and one that we see as highly profitable for investors, specifically in 2018.

Be sure to be tuned in this week for a one-on-one with myself and the CEO and founder, Chris Miller, as we dive into the details of why this is such an incredible opportunity.

Remember that in life, fortune favors the bold, so I highly encourage everyone to be ready to strike when the opportunity presents itself.

Never base any decision off of our emails. CrushTheStreet.com stock profiles are intended to be stock ideas, NOT recommendations. The ideas we present are high risk and you can lose your entire investment, we are not stock pickers, market timers, investment advisers, and you should not base any investment decision off our website, emails, videos, or anything we publish.  Please do your own research before investing. It is crucial that you at least look at current SEC filings and read the latest press releases. Information contained in this profile was extracted from current documents filed with the SEC, the company web site and other publicly available sources deemed reliable. Never base any investment decision from information contained in our website or emails or any or our publications. Our report is not intended to be, nor should it be construed as an offer to buy or sell, or a solicitation of an offer to buy or sell securities, or as a recommendation to purchase anything.  This publication may provide the addresses or contain hyperlinks to websites; we disclaim any responsibility for the content of any such other websites. We have entered into an agreement for three hundred thousand dollars and five hundred thousand options paid for directly by the company. We have also purchased shares and are long the company. Please use our site as a place to get ideas. Enjoy our videos and news analysis, but never make an investment decision off of anything we say. Please review our entire disclaimer at CrushTheStreet.com.