MULTIPLE-MARKET MAYHEM: Strategize or Suffer the

So, it looks like the Federal Reserve is finally achieving what it set out to do: raise interest rates and shrink its balance sheet until something breaks. Perhaps they didn’t count on multiple things breaking at once, however, and a systemic collapse far beyond what the Fed had intended.

As the old saying goes, be careful what you wish for. With August inflation only easing to 8.3% and a very long way off from the Fed’s target CPI of 2%, Jerome Powell and his colleagues will have to tighten longer and harder. The result was the worst September for the stock market in many years, and we’re now heading into the scary October, which historically saw market crashes in 1929, 1987, and 2008.

The final day of September was a deep red day in the major stock market indexes because the Federal Reserve’s preferred inflation gauge, the core personal consumption expenditures (PCE) price index which excludes food and energy, rose 4.9%, which was more than expected.

In order to combat inflation, the Fed has already enacted a series of interest rate increases this year totaling three percentage points. With that, Powell and the other committee members have raised rates to their highest levels since early 2008 – and the new PCE data means the central bank will have no choice but to continue tightening.

It’s not just Powell that’s hellbent on tightening, either. In a speech, high-ranking Fed official Lael Brainard cautioned against pulling back “prematurely,” saying rates will remain higher “for some time” until inflation is brought under control.

So, whatever pain you’ve witnessed in the financial markets so far this year, is only bound to get worse in the near term. The most direct collateral damage will take place in the housing market, as interest rate hikes will naturally inhibit borrowing and lending activity, including for mortgages.

Make no mistake about it: It’s very possible to witness a rolling over of the housing market tsimilar to 2008. The 30-year fixed mortgage interest rate just reached a stomach-turning 7.08%, after starting 2022 at 3% and hovering near 5% for most of the summer.

And so, it’s still shocking but really not too surprising that U.S. home prices pulled back in July at the fastest rate in the history of the S&P CoreLogic Case-Shiller Index, from 18.1% in the prior month to 15.8%. It’s a symptom of a real estate market that’s “cooling” or “softening,” which is the mainstream media’s politically correct way of saying that previously sky-high home prices are now crashing.

Craig J. Lazzara, managing director at S&P DJI, accurately characterized this as a “forceful deceleration” in the U.S. housing market. It’s also likely to get worse from here, as “Given the prospects for a more challenging macroeconomic environment, home prices may well continue to decelerate.”

Meanwhile, the stock market is bound to fall further as the Fed’s blueprint to tamp down “sticky” inflation involves orchestrating a deliberate slowdown of the U.S. economy. As a result, the 10-year Treasury bond yield is at its highest level in over a decade, and people and institutions around the world are scrambling to raise cash – and especially U.S. dollars – to fund their bond purchases now. 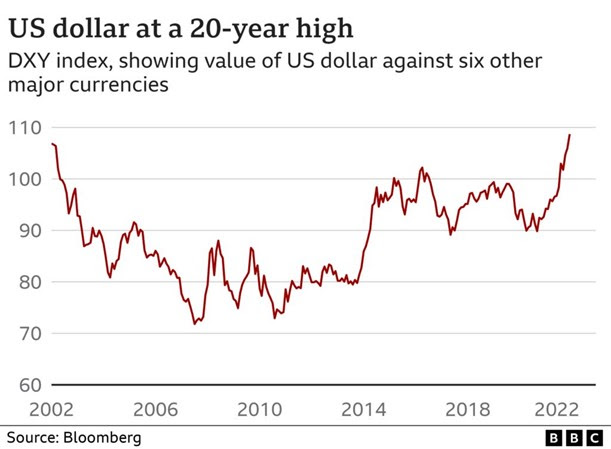 The net effect has been a surprisingly strong dollar, which has put a damper on U.S. corporate earnings; Morgan Stanley has observed an inverse correlation between the dollar and American corporate earnings, so don’t expect third- and fourth-quarter earnings reports to be stellar.

This doesn’t mean that you need to keep all of your wealth in cash in a shoebox under your bed. It’s just a reminder to be selective and tactical in your current investments; it’s important to be invested in the right sectors when all of the indicators point to persistent volatility.

This begs the question: What are the right sectors now? If inflation is “sticky,” then we’re sticking to segments of the markets that will benefit from inflation. The most obvious area to focus on in this environment is commodities, and particularly energy and precious metals.

Both energy and precious metals prices have pulled back significantly from their highs, so the timing is right to start accumulating shares of carefully selected producers in these sectors. Expect a flood of capital to flow from flagging sectors to energy, gold, and silver – and consider positioning yourself to be there before the great rotation takes place.