Stretched Thin: 58% of Americans Are Living Paycheck to Paycheck

If Joe Biden’s goal was to promote equality and close the wealth gap in America, he half-succeeded. The wealth gap is widening, so Biden failed miserably on that front. However, there’s some form of equality because people are getting slammed by inflation across the board.

After three months of U.S. annualized inflation topping 8%, people’s budgets were bound to become strained. Yet, it’s gotten worse than most people ever imagined – this level of poverty isn’t supposed to happen in America, or so they thought.

There “seems to be little relief in sight,” according to Anuj Nayar, Lending Club’s financial health officer. Lending Club’s research found that 58% of Americans, or roughly 150 million adults, lived paycheck to paycheck in May. In other words, around three in five U.S. consumers devote nearly all of their salaries to expenses, with little to nothing left over at the end of the month.

Now, you might assume that all of the American consumers who are struggling to get by, must be living in poverty or at least are in the middle class. However, the research shows that Biden’s inflation is hitting families at practically all wealth levels. Shockingly, slightly more than one in three U.S. consumers annually earning $250,000 or more currently live paycheck to paycheck.

If you need confirmation from a separate research firm, here you go: Willis Towers Watson found that 36% of U.S. employees with salaries of $100,000 or more are living paycheck to paycheck. That’s double the share in 2019, so clearly there’s a change for the worse. The point here is that “Employees at higher pay levels aren’t immune to living paycheck to paycheck,” to quote Mark Smrecek, financial well-being market leader for North America at Willis Towers Watson. 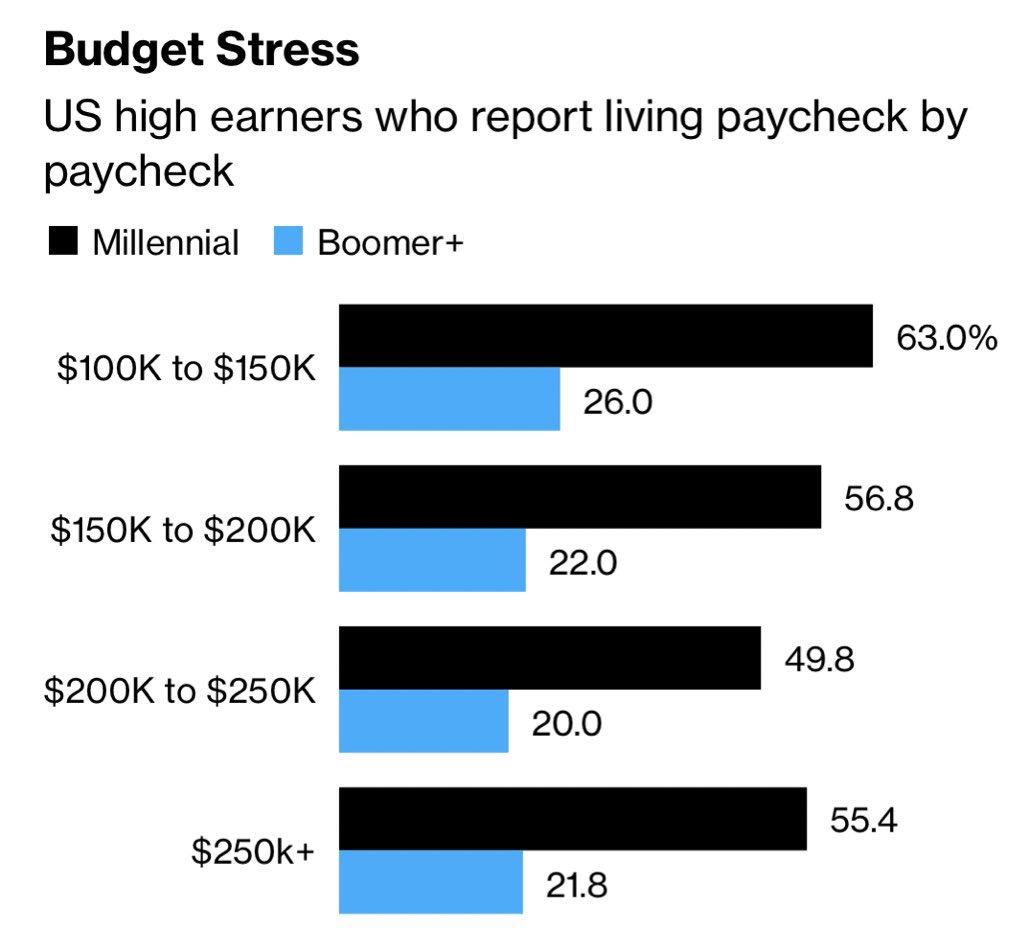 As you can see in the chart shown above, the problem is worse among younger high earners. This makes sense as older earners are more likely to have years’ or decades’ worth of savings as a cushion against economic problems.

So, what exactly is going on here? It’s not a case of rampant spending among U.S. consumers, nor are they suddenly unwilling to save their money. Rather, it’s the “Biden tax”: 8.6% inflation, the highest increase since December of 1981.

At the same time that the inflation rate is spiraling out of control, wages generally remain stagnant. It’s not often reported in the mainstream media, but since wage growth isn’t keeping up with higher product and service prices, the consumer’s dollar doesn’t stretch as far.

Making matters worse is the imbalance of rising inflation, as it’s tilted toward goods that people need the most. Sure, luxury items are more expensive than they were at the beginning of the year. Some of the most egregious price increases, however, are found in essentials like fuel and food.

Also, rents are skyrocketing while used cars are more expensive than they’ve been in a long time. Consequently, there’s no escape as people who can’t afford to buy a new home or a new car are being victimized by soaring inflation.

This situation has forced some families to use credit cards just to pay the bills, but that’s problematic in the long run. A report from the Federal Reserve Bank of New York found that U.S. credit card balances rose year over year in the first three months of 2022, reaching a whopping $841 billion. 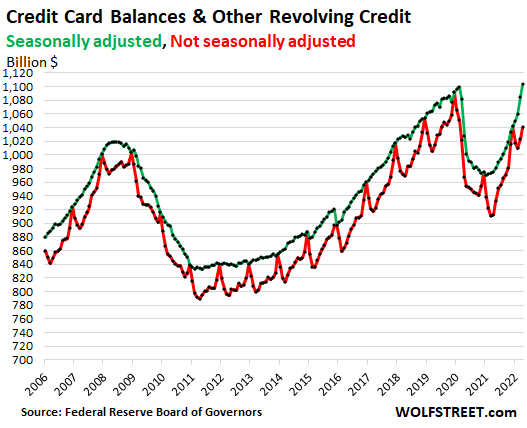 And so, individuals and families are forced to do what the government has done for years: put off debt until later, with no idea how they’re going to repay the principal debt and the interest that will accrue.

In order to tame inflation, the Federal Reserve is aggressively raising interest rates. This might or might not work – or it could turn inflation into stagflation this year. Besides, raising interest rates means that credit card users will have to pay higher rates on their balances, thereby plunging them deeper into debt.

Turn on the news, and you’ll hardly ever hear anything about this ongoing problem. Instead, you’ll see “important” stories about Whoopi Goldberg sending a warning to Justice Clarence Thomas. As long as they can distract you, they’ll hope that you won’t notice what’s going on in the economy – but they didn’t count on the citizens staying informed, vigilant, and ready to take action when necessary.