Tech Stocks Are Fine, but These Are Better

Throughout the day I speak to a lot of novice investors, and I’ve noticed a clear and consistent pattern. With very few exceptions, I’m seeing new traders piling into technology-sector stocks. There’s nothing inherently wrong with technology stocks, but there are other areas to consider.

For one thing, they’re not diversifying their allocations enough. Beginning investors didn’t experience firsthand the bursting of the dot-com bubble in the early 2000’s. Heck, some of them aren’t even aware that this event took place.

The problem with not knowing history is that you’ll be doomed to repeat it. The widespread sentiment that tech stocks can only go up reminds me of how the market felt in 1999. It’s like watching a slow-motion train wreck that you’re powerless to stop.

At least in 1999 the tech-stock mania was somewhat understandable. The Internet was revolutionizing the way people and businesses communicated. Smartphones were years away, and something as slow and unreliable as dial-up Internet was an exciting development.

And so, the rise and fall of Pets.com, while absurd in hindsight, at least had a shred of logic attached to it. Today, it’s hard to discern any logic at all in the relentless price action of technology stocks. There’s a second wave of a global pandemic ravaging the economy, yet the NASDAQ continues to print new all-time highs.

Actually, I shouldn’t even point to the NASDAQ because it’s really only a handful of tech names pulling up the entire sector – and really, the entire market: 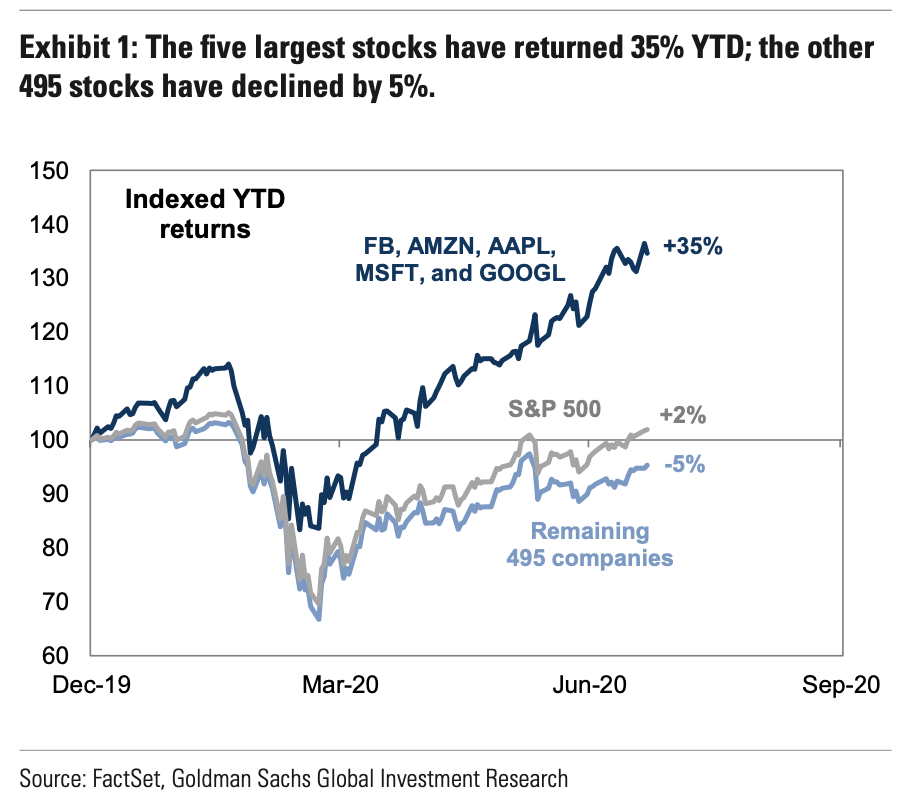 If it weren’t for traders bidding up Facebook, Amazon, Apple, Microsoft, and Google, the stock market would be down for the year. In other words, the market would more accurately reflect the reality of the economy.

In the words of Michael Wilson, Morgan Stanley’s chief equity strategist, “breadth continues to narrow, and something has to give.” With that, Wilson concludes that “the most likely outcome remains a 10 percent correction in the broader index by the biggest market winners at this point rather than the laggards.”

I’ve had a hard time convincing novice investors of this because in their brief experience, tech stocks only go up. Even a pandemic and civil unrest can’t keep them down. When there were riots in the streets of America’s major cities and buildings being torn apart, stocks went up even faster.

So, I can’t blame beginning traders for coming to the wrong conclusion. At the same time, though, I’m concerned that they’re over-concentrating their capital into a single sector, or worse yet, just a handful of stocks in that sector.

Furthermore, they’re buying stocks at high prices, which is the opposite of what the smart money does. Institutional investors buy when retail traders are panicking, and they tend to do well with that strategy over the long term.

The institutions are also better at diversifying their portfolios. Furthermore, they understand market cycles and they allocate towards whichever type of asset is out of favor in anticipation of a reversion to the mean. For instance, right now “growth” stocks (i.e., expensive stocks and particularly the aforementioned tech names) are stretched in comparison to value stocks:

“Stretched” might not even be the right way to describe the market’s over-emphasis on hyper-growth stocks. With the entry of so many eager newcomers to stock-market trading (many of whom are sitting at home and trading out of sheer boredom), the art of value investing seems to have been forgotten entirely.

However, no trend lasts forever and that includes the mania surrounding high-flying tech stocks. With that in mind, it’s essential to start accumulating assets that offer better value and hence a more favorable reward-to-risk profile.

Gold and silver mining stocks immediately come to mind as they’re now emerging from a multi-year bear market. Thus, if you’re looking for an asset class that’s in the beginning stages of a bull run, consider precious-metals stocks.

Dividend kings are also must-have additions to any portfolio in this lopsided market. Some tech stocks, such as Amazon and Google, don’t even offer dividends. In the quest for quick gains, it seems that beginning investors haven’t learned about the magic of dividend compounding, which is what helped make Warren Buffett a multi-billionaire.

Finally, it’s not a bad idea to look into so-called “alternative” investments, such as companies developing solutions in cannabis and psychedelics. These could be the high flyers of tomorrow, but they’re the hidden bargains that you can own today.