The Gold Army is Arriving

For many in the gold community, it has been brutal guerilla warfare. The gold sector has witnessed one of the most brutal bear markets I’ve ever been part of over the past number of years.

As value investors, we’ve been alone in the trenches, fighting for deep-value opportunities without the reinforcement of a bull market, and certainly no acknowledgement from the mainstream media.

As far as the resource sector was concerned, we were in the middle of the most depressed market I’ve ever witnessed. So much so, resource companies weren’t even responding to the upward prices we were seeing in metals.

This is why I profiled Barrick Gold in June of last year at $13. I knew we were on the verge of the most fundamental bottoming out of a sector that we could have ever asked for. It was bottom-line revenues that were going to have to drive excitement back into the sector with valuations rising because zero speculation existed.

Since then, we’ve seen gold rise up to $2,000, millennials on record buying gold, and Warren Buffett purchasing Barrick Gold as a sign of how right we’ve been. We’ve been in the trenches, fighting this war of value identification and sticking to our convictions, and it feels great to see the masses starting to enter the space.

Barrick Gold is now up 130% from our profile price and I still think it’s early in the game. Mind you, this isn’t a penny stock – this is a blue-chip company having serious moves higher. 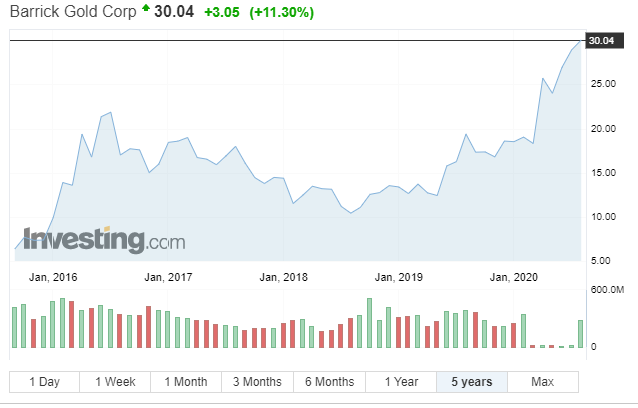 GoldMining Inc. (TSX: GOLD & US: GLDLF) is a company my readers are familiar with. Not long ago, the company’s name was Brazil Resources.

Over the years, I’ve spoken to major shareholders Marin Katusa, Doug Casey, and others leading up into this bull market we are seeing in gold.

As you are all well aware, out of all the gold explorers and developers in the Americas, GoldMining has one of the largest portfolios of projects located on the continents.

The last time I spoke with Doug Casey, his most fundamental reason for why he’s a shareholder in GoldMining is the leadership displayed by Amir himself. You can see that Doug has a very special place for Amir.

This week, I will have a special update with legendary investor Rick Rule in which I plan to have an in-depth discussion on where we are in the resource sector.

The markets have truly become casinos.

This has become reflective in overvaluations in equities, bonds yielding zero and negative rates of return, and the unprecedented uncertainty because of the disconnect between fundamentals and stock market enthusiasm.

It would not surprise me one bit to see a pullback, or even a crash in the stock market.

If this crash does happen, I would expect it to initially take gold and silver down with it.

However, I believe there has been a fundamental sea change in gold and silver. I believe wholeheartedly that the correction will be quicker and more of a “buy the dip” moment than we’ve seen in metals in years. After such a strong move in precious metals, taking a breather would be healthy, and it would likely be a setup for the next leg up.

Just look at how quickly the equity market recovered from the March lows. Of course, much of it was from the stimulus, but also expectations of a recovery. From the initial onset of the coronavirus, we’ve seen a reflation of the stock market because of what’s known as recency bias: the 400% bull market following the 2008-2009 market crash is still fresh in people’s minds.

This also happened in gold and silver during the March lows, which gives me assurance that any sort of selloff will be short-lived.

Particularly in the resource sector, any sort of pullback might be so quick that if you aren’t sitting at your computer to actually trade it, you might even miss it.

With so much money being printed by the government, anti-inflationary assets are getting the attention they deserve. Gold and silver are the obvious ones, but we’re seeing interest pick up in Bitcoin as well.

In my opinion, saving in cash is what will destroy vast amounts of wealth. I believe owning hard assets, real companies, real estate or farmland, and even art or other collectibles will be better than cash going forward.