THE NEW POST-CORONA ECONOMY: This Changes Everything!

Much like September 11th, the coronavirus crisis will earn its own unfortunate chapter in the American and global history books. The events of our lives will be divided into “before” and “after” in relation to the pandemic. Everything from how to work, shop, and communicate with each other will be permanently impacted.

The latest count shows over 1.7 million confirmed cases worldwide and more than 105,000 fatalities. Regardless of the day-to-day movements in the stock market – which have been even more volatile than during the 2008-2009 financial crisis – the picture of a “V”-shaped recovery in the real economy has evolved into a “U” and then an “L.”

The reaction to the virus will be a case study for decades and generations to come on how to handle catastrophes in the future.

There is no way to downplay the virus on a micro-level. Some people have lost their lives while helping others grasping for theirs by their fingertips. The good news is that expectations for the number of deaths in the United States are now expected to be much lower than the original 100,000-240,000.

To this end, hospitals aren’t being overrun like many news outlets are leading people to believe and the virus is actually being handled in a way that is manageable from a macro perspective.

Quantifying the reaction to the pandemic at the expense of the economy will be a nuanced question that will never be fully understood.

There’s no question about the damage that the pandemic has wreaked upon the economy. A nation of unemployed people under stay-at-home mandates cannot function for extended periods of time.

Former Federal Reserve Chair Janet Yellen admitted that the unemployment rate is realistically closer to 13%. I personally believe we will see official unemployment get to 25%, while America’s gross domestic product will likely decline by 30%.

When we include the plight of the long-term unemployed and gig workers, a worrisome picture emerges. Just like with the so-called “recovery” from the financial crisis, many full-time jobs simply won’t come back.

It’s a vicious cycle because employment depends on the demand for products and services but consumer habits are changing. It will take months (and maybe years) for people’s habits to start going back to normal as they’re now afraid to visit sports arenas, concerts, restaurants, cruise ships, movie theaters, and so on.

Once people are confident that they can venture outside of their homes, they’ll eventually participate in the consumer-driven economy again. This will lead to more demand in other areas because a more sociable public is a more confident public, and that leads to more shopping and spending across the board.

We’re not even close to that point now. The economic headwinds will persist for a while, as indicated by the big banks’ bleak estimates for 2020’s S&P earnings: 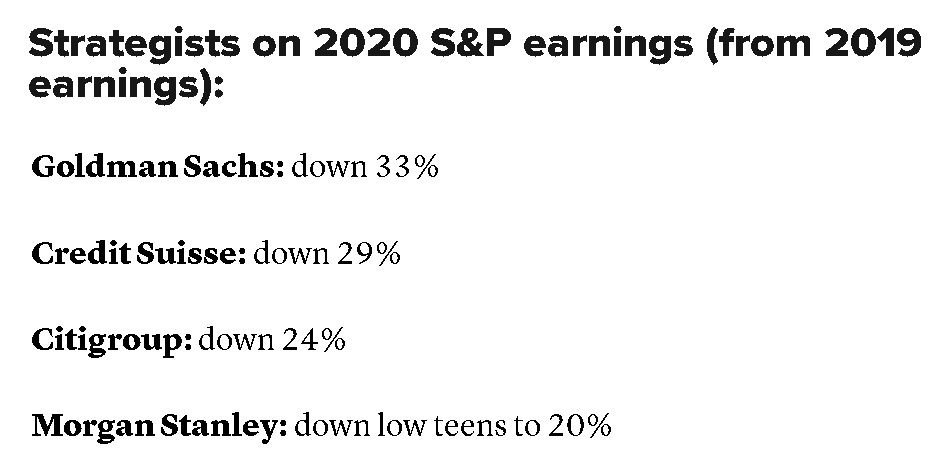 Corporate earnings are the lifeblood of the economy, so these numbers will need to improve dramatically before any real confidence can be restored. This will be reflected in the large-cap stock market through continued volatility, which will express itself via swift moves in both directions.

The shockwaves aren’t limited to stocks because precious metal shortages have roiled the markets as well. The coronavirus outbreak and the flood of easy money have precipitated unprecedented demand for gold and silver. That’s great if you already owned hard assets but challenging if you’re looking to buy now.

We’re seeing a major spike in demand for bullion, to the point where some mints have literally depleted their inventories. To compound the supply crunch issue, nationwide lockdowns in some mineral-rich regions have caused a number of gold and silver mines to shut down.

“Out of stock” notifications from online bullion dealers might become a harsh reality for those looking to get their hands on bullion as the squeeze on supply gets tighter. This will put upward pressure on metals in a way this generation has never seen.

These economic ripple effects were unimaginable just a few months ago, but we all have to adjust to the new reality that confronts us.