This Indicator Says that a Recession Is Almost Inevitable

On June 21, the S&P 500 shot up 2.45% and the NASDAQ rose 2.51%. On bright green days like this, it’s easy to take the blue pill and assume that the bear market in stocks is over. Don’t celebrate yet, though, as on particular chart suggests that the carnage could return at any given moment.

In any given bear market throughout history, there are plenty of head-fakes to draw amateur traders in before the next leg down. Remember, bull markets don’t go straight up, and recessions involve brief relief rallies that are designed to trick inexperienced investors.

Since investing is a marathon and not a sprint, it’s important to take stock of the economy’s biggest challenges, and ask yourself whether they’ve magically been solved now. Of course, the answer will be no in every instance. There are still supply-chain bottlenecks, inflationary pressures, and an aggressively hawkish Federal Reserve to contend with.

Even as Joe Biden insists that America isn’t destined to have a recession and the Fed claims that it’s not trying to engineer one, less biased experts are pointing to the numerous cracks in the foundation. One example is former Treasury Secretary Larry Summers, who was largely ignored last year when he warned that the Biden administration’s $1.9 trillion stimulus plan could worsen inflation.

Apparently Biden is conferring with Summers now, but it’s too little, too late as the White House should have taken action before the Consumer Price Index hit 8% for three consecutive months. Now drastic action will be needed, to the point where Summers says that five years of 5% unemployment or two years of 7.5% unemployment will be needed to tame inflation. 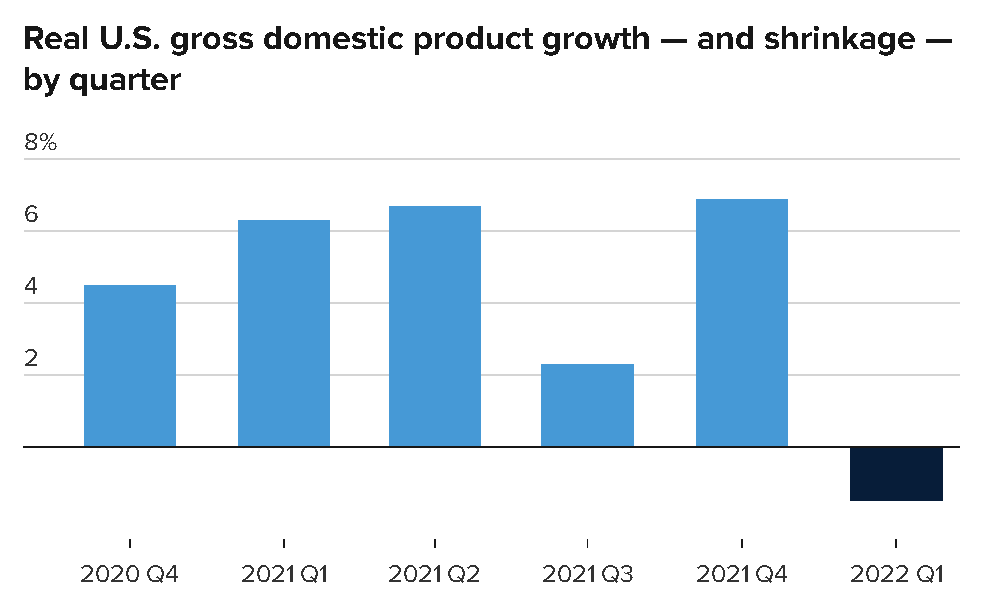 America’s economy tells different tales, depending on which numbers you’re cherry-picking. Sure, the supposed 3.6% unemployment rate sounds terrific, but Q1 2022’s 1.5% GDP contraction suggests that the nation could already be mired in a recession.

The seemingly low unemployment rate might be explained by a desperate hiring spree as businesses scramble to address worker shortages in high-need areas from trucking to nursing. Thus, a recent post-COVID-19 hiring wave may have created a misleading head-fake in the employment stats.

Don’t expect the unemployment rate in the U.S. to remain low for much longer as mass layoffs are creeping into the financial headlines now, including some well-known tech companies and even Tesla, the poster child for private-sector hyper-growth.

And speaking of Tesla, Elon Musk recently forecast that “a recession is inevitable at some point,” adding, “As to whether there is a recession in the near term, I think that is more likely than not.” This prediction comes on the heels of Musk saying he has a “super bad feeling” about the global economy and announcing his plans to cut 10% of Tesla’s workforce.

Musk joins a growing chorus of high-profile individuals calling for a recession in the U.S. Another bearish voice is that of veteran investor Michael Novogratz, who has bluntly stated that “The economy is going to collapse,” and “We are going to go into a really fast recession”

Yet another worrisome statement was overhead from someone who’s in the thick of America’s private sector: Brian Cornell, the CEO of Target. Noting “an environment many of us haven’t seen before,” Cornell reported, “We have, obviously, a significant supply chain, and we’re planning for freight and transportation [costs] to grow by $1 billion. That number doubled almost overnight.” 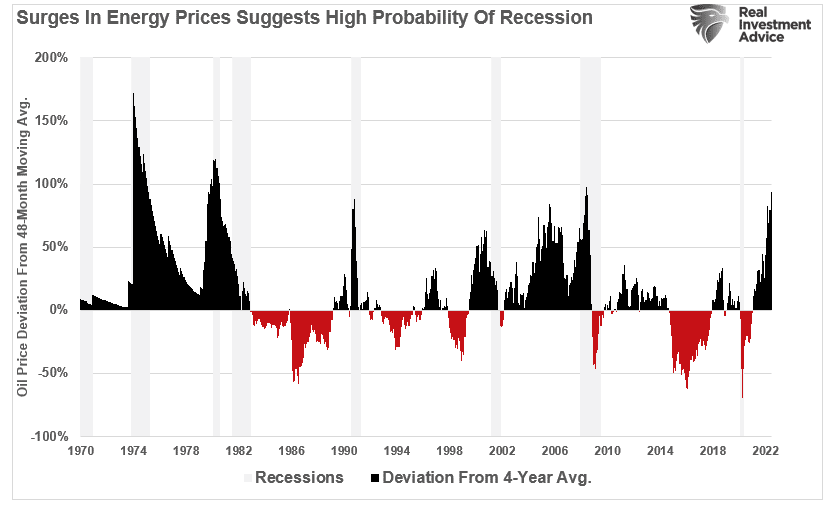 The Target CEO’s statement leads directly to a root cause of the current/imminent recession, as well as an indicator that the U.S. economy is probably about to deteriorate quickly. The chart above, for which Real Investment Advice deserves credit, spells trouble as sky-high energy prices usually portend a recession.

Why would Target’s CEO, and undoubtedly many more corporate executives, brace for impending ramp-ups in freight and transportation costs? To get the answer, all you have to do is go fill your car up with gasoline, and try not to faint when you see the total price.

When Biden aggressively restricted drilling and refinery permitting, he ensured a massive rally in fossil-fuel prices even before Russia invaded Ukraine. Now, America is experiencing similar conditions to 2008 as fuel costs crimp the bottom lines and balance sheets of businesses across all sectors.

The only piece of the stagflation puzzle that’s missing is elevated unemployment, but that could be the next and final shoe to drop. For the time being, expect high fuel costs to contribute to America’s economic woes, while signaling politicians’ failure to solve them – if they’re even interested in doing so.