Borrow, spend, rinse and repeat: for generations, governments representing developed nations around the world have put the burden on tomorrow’s taxpayers to fund today’s entitlement programs. It’s a great way for politicians to get re-elected, but print-and-spend programs are bound to have dire consequences sooner or later.

The fact is, government debt is your debt. You’ll end up footing the bill for policymakers’ reckless decisions (or lack thereof) and their refusal to take action. You’ve already heard about 8.5% U.S. inflation and it’s even worse in a number of E.U. nations – but that’s an overt threat to your way of life, and there’s another threat which the mainstream press doesn’t talk about much.

A much more insidious destroyer of the middle class’ wealth and quality of life is ever-mounting global debt. This figure is expect to reach $71 trillion this year, meaning that every man, woman, and child in the world shares nearly $9,000 worth of global debt (assuming a world population of 7.9 billion). For a family of four, this is a share of the total debt of roughly $36,000.

Plus, the global government debt is accelerating rapidly, as it’s set to rise 9.5% just this year alone. In the chart shown below, you can see how the debt burden will increase in the coming years, as will the interest payments that will be required to service that debt: 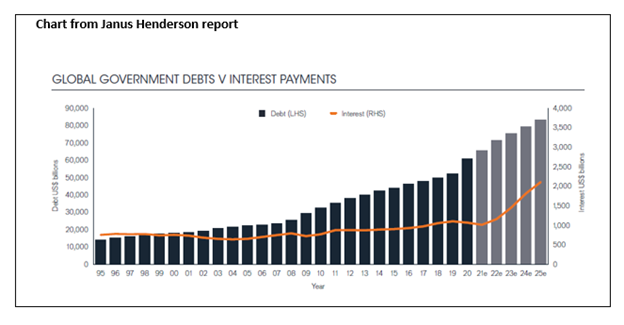 The beautiful thing about scary facts is that they will likely motivate you to be proactive.

I know it does for me…

I have a wife and young kids. One of the things I don’t want to happen to me is to die young, so I’m actively taking preventative measures, such as exercising and strategic eating.

Honestly, I would probably look like a train wreck if I didn’t have a little bit of fear to motivate me because number 1, I like to eat, and number 2, religious exercise is a commitment.

So in this sense, I would say fear is good…

Dave Ramsey talks about people escaping debt like a gazelle running from a cheetah that is trying to consume it. Any bit of slumber or rest could result in obliteration.

This is true in your finances as well.

At this point, the economy is a threat for those not prepared, and you need to be intensively solidifying your cash flow, insulating your business/career and protecting your investments.

One of the biggest things that I’ve been advocating for throughout the years now is insulating yourself from the economy and making sure you are hedged.

I suppose this list could go on, but if you focus on these four simple areas, if any one of these pillars were attacked or destabilized, the other three would stand strong and support you. This promotes longevity and a sense of security, especially in an economic environment that is weak.

Compounding wealth is a process and takes time, and anyone that tells you otherwise is either lying to you or they don’t know what they are talking about.

What’s worse is when speculators can’t visualize the compounding machine and then start doing stupid things with their money on a day-to-day or week-to-week basis by trying to get to the end result too fast, which ends up invariably ruinous… nearly every time.

Great returns multiplied by zero always equals zero. Don’t be in too big of a rush!

No one actually gets wealthier every single day unless you’re compounding pennies in the bank account or solely invested in 1% CD’s, and you’d better be ultra-wealthy if that is where all your wealth is stored (though it’d still be a bad call).

On the other hand, one can sharpen their mind and become mentally wealthier everyday on their compounding sojourn. And that is a wise thing to do.

The vast majority of wealth for the richest investor on earth didn’t materialize until after 60 years of age, even though he started investing in 5th grade. Buffett compounded his wealth north of 20% for decades, yet the preponderance of his net-worth materialized after 60! The exponential, compounding hockey stick is indeed exciting to observe in retrospect.

The journey there however, is often akin to watching paint dry.
Checking the value of your house or portfolio everyday isn’t particularly beneficial…. and academic studies show it actually makes people less happy, even though they may well be on their way to achieving their objectives and goals!

But as an investor, checking in on publicly traded markets is truly a wonderful thing. It’s where some of the greatest long-term wealth can be acquired!

For example, when two rational businessmen are negotiating the price of a private company, the price of the business will sell extremely close to fair value as the cash flows are counted, the grow rates, synergies, etc. are all calculated into the equation.

The housing market tends to generally offer better deals than private business transactions. But one needs to take a vulture-like approach, pounce hard when deals are there, and then work very hard or have to endure extreme patience like many good investments take.

Publicly traded markets on the other hand offer tremendous hunting grounds for irrational buying and selling in volume across any given year. This is where the astute margin of safety, intrinsic value investor has a huge advantage.

People think that when they are 50, it is now too late to start investing because they are just a few years from retirement and will not likely benefit from compound appreciation. Look, the fact is, you are likely to live until you are at least 85, which means you have three decades to compound your wealth and experience the exponential wealth effect take over.

And if you are young, well, start now and truly leverage what could be small monthly income into a pile of retirement savings.

When you have decades’ worth of time in front of you to invest, 30 years seems boring. It’s usually when you are 45 that you look around and realize you wasted 15 years twirling your thumbs when you could have been compounding and receiving your boring return on your money.

The difficulty level in thriving in today’s world is gearing up.

Whether it’s the fear of missing out or the fear of being consumed, I want you to be motivated enough to do something with your future so that when you look back on it, you are completely and utterly blown away.

The process of compounding wealth is best characterized by an interesting paradox:  What is very exciting to observe, in retrospect, over long periods of time can appear to be relatively dreary and dull while actually living through the process.  The cumulative effect of many years of relentless progress will inevitably result in some staggering figures, but many investors have trouble visualizing that eventual result when viewing business or their portfolios on a year-to-year or quarter-to-quarter basis. –Rational Walk