It was supposed to be a new era of wind farms and solar panels replacing fossil fuels in the U.S. and globally, a time when “green and clean” power sources would eliminate the need for oil and natural gas. That was a fantasy from two years ago that is now crashing headfirst into a cold, harsh reality.

The reality is that there will be no fast, easy, seamless transition to a “carbon neutral” planet anytime in the near future. In Germany, people are harking back to the 1800s and resorting to using firewood because they can’t afford the natural gas that provides electricity to homes and businesses.

Meanwhile, just as Joe Biden started bragging about $3.00/gallon gasoline in the U.S. – and with the midterm congressional elections right around the corner and politicians’ jobs hanging in the balance – OPEC+ nations just reminded us of who really controls the puppet strings.

Just like that, the mistakes of the past are coming back to haunt some of those politicians. Let’s not forget that President Trump tried to add 77 million barrels of oil to the U.S.’ emergency petroleum reserve in early 2020. This would have been a perfect time to do it since crude oil prices were under $20 per barrel at that time.

Yet, Trump was blocked by congressional Democrats. Fast-forward to October of 2022 and Biden is depleting the nation’s Strategic Petroleum Reserve like there’s no tomorrow. In the latest draw, the U.S. emergency oil stock dropped from over 638 million barrels to around 416 million. 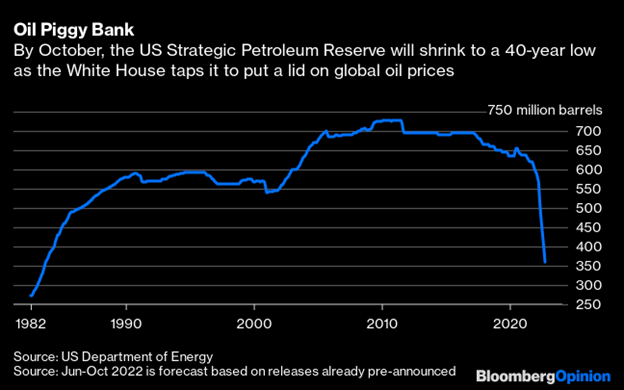 In just two years, Biden has drained more than a third of the Strategic Petroleum Reserve in a desperate attempt to keep rising gas prices under control. Yet, even as prices at the pump jolt higher, the Biden administration is currently weighing a complete block on offshore oil drilling.

The Energy Information Administration estimates that the U.S. produces slightly more than 11 million barrels of crude oil per day and exports about 8.54 million barrels per day of petroleum to 176 countries and 4 U.S. territories.

There’s clearly a serious imbalance between supply and demand since the U.S. consumes an average of 20.6 million barrels of oil per day. On a global scale, the EIA estimates that 99.4 million b/d (barrels per day) of petroleum and liquid fuels were consumed in August, up 1.6 million compared to the same month of 2021. Moreover, global consumption will increase by an average of 2.1 million b/d for all of 2022 and by an average of 2 million b/d in 2023.

Biden is pointing the finger at OPEC+ for cutting 2 million b/d of petroleum production but the U.S. could have been much more prepared for cuts like this. 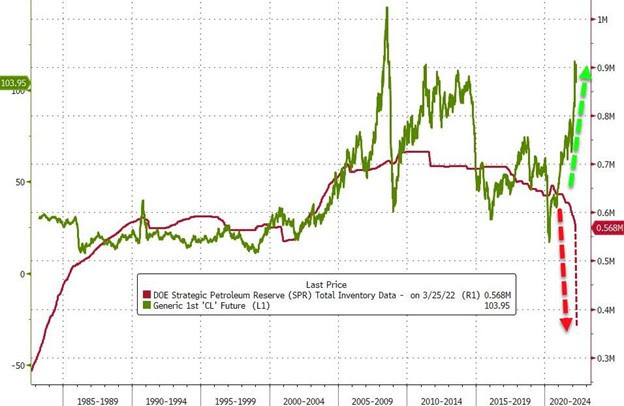 While Biden’s so-called “Inflation Reduction Act” provides many billions of dollars for his ESG agenda, the current administration has spent years discouraging energy security through domestic production. Biden won’t tell you that gasoline prices increased 48% from Inauguration Day 2021 to the week before Russia invaded Ukraine.

Biden has consistently refused to hold oil and gas lease sales on federal lands, stretched the timelines to approve permits to drill on already leased land, and dramatically increased leasing fees while decreasing the amount of available acreage for drilling.

Discouraging domestic production has, to put it simply, made oil more expensive and made the nation less energy-independent and secure. It’s a problem that will cost the taxpayers and consumers billions of dollars over time both directly and indirectly.

Even so, where there’s a problem there’s also an opportunity. We are bullish on energy going forward and are currently researching for some strategic positioning. So, be sure to vote with your conscience and your common sense – and stay tuned for more details to follow on leveraging energy’s powerful new bull market.