Uranium: The Coiled Spring of the Commodities Space

You might not think much about uranium in your day-to-day life. Yet, life without uranium would be unimaginable. It gets a bad reputation sometimes due to misinformation and propaganda, but really uranium is among the cleanest energy sources available today.

Around the world, governments are realizing that it’s important to have a mixed energy policy which doesn’t rely too heavily on fossil fuels – and which includes nuclear energy.

Investors should consider that the uranium spot price, now in the $30’s, still has plenty of room to run. It’s been as low as $18 per pound in 2017, but also as high as $136 per pound prior to the Fukushima incident.

For comparison, consider what it would take for the oil price to double. It would have to return to its highest level in history.

Meanwhile, uranium could triple in price and still not yet have reached its prior peak. And of course, if uranium doubles or triples then anyone who owns a good uranium mining stock should see some major profits.

The thing is, amateur traders tend to bail at the worst possible time. They hear about uranium mining stocks and they think that they’re going to double their money in 24 hours.

It doesn’t work that way in real life. As a uranium market investor, you have to appreciate the old saying, “Be right and sit tight.”

And, you have to be able to tolerate some volatility along the way. That’s why you don’t have to pour all of your investable capital into uranium stocks all at once. It’s perfectly okay to scale into your position.

Uranium, like other commodities, is a long-term investment. As Warren Buffett once famously said, “You can’t produce a baby in one month by getting nine women pregnant.”

But at least with uranium, you can wait patiently because you’ve got the government on your side.

Most people don’t know this, but nuclear power provides for one-fifth of the U.S.’s overall electricity, and slightly more than half of the nation’s zero-emission energy.

As a result, the U.S. Department of Energy is committed to “making it a key part of our clean energy future.”

To support existing and advanced nuclear technologies, the government’s fiscal-year 2022 budget request includes a record $1.85 billion for the Office of Nuclear Energy. That represents an increase of more than 23% from the fiscal-year 2021 enacted budget. 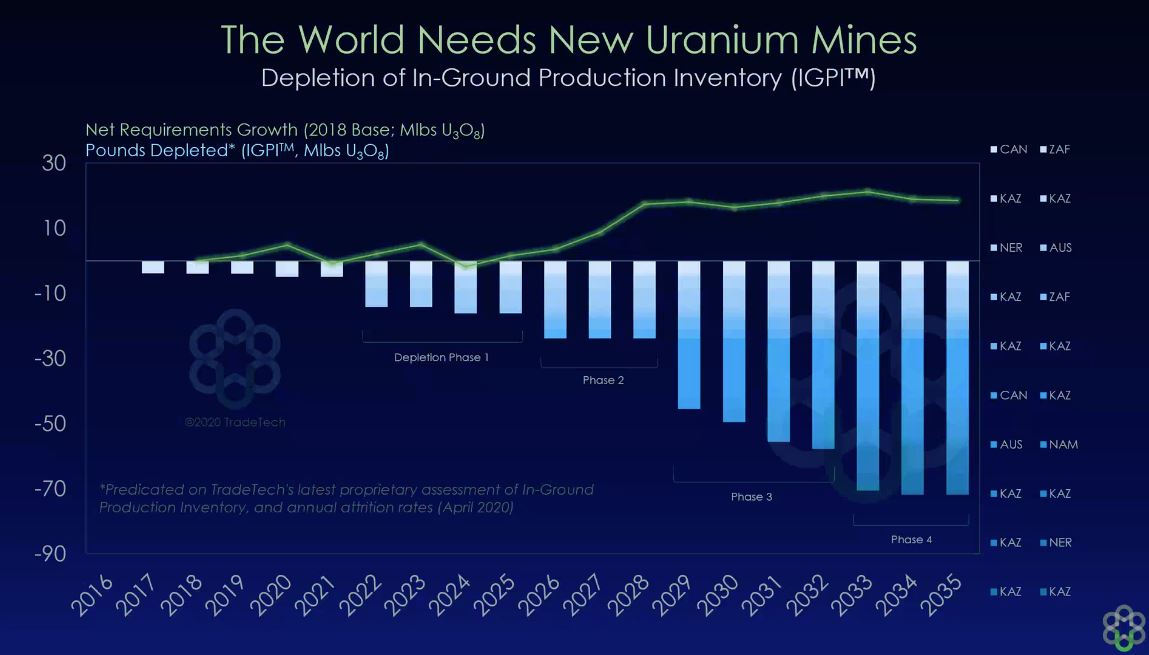 More than $1 billion of the proposed amount would be dedicated to nuclear energy research, development, and demonstration programs. This would include $245 million to support the demonstration of two advanced reactor technologies within the next six years.

Moving the nations towards net-zero carbon emissions by 2050 would be practically impossible without nuclear energy. It’s fair to say that we’re on the cusp of a nuclear renaissance – and the world is going to need a while lot of uranium over the next decade.

What’s concerning is that the amount of uranium being produced currently isn’t keeping up with the demand for the mineral.

Mine shutdowns in 2020 only made the uranium supply deficit worse. Scotiabank metals and mining analyst Orest Wowkodaw recently issued a warning that the annual global supply deficit is projected to average a total of 23 million pounds through 2022, or roughly 13% of global uranium demand.

“We continue to forecast the U3O8 [uranium] market to remain in a relatively large structural deficit position for the foreseeable future, supporting stronger prices ahead,” Wowkodaw wrote.

TD Securities analyst Greg Barnes affirmed the positive outlook, saying, “We believe that uranium market fundamentals have improved markedly over the past 12 months.”

And so, the spring is coiled tightly for the uranium market – it might not unleash tomorrow, but it will sooner or later and the impact will be momentous.