Venezuela Tried Banning Guns. Here’s How That Turned Out

It’s been six years since former socialist dictator Hugo Chavez banned Venezuela’s citizens (though not his military regime, of course) from owning or carrying guns. Originally sold to the public as a war against violence, the net effect has been a war against an unarmed Venezuelan population.

Current Venezuelan President Nicolas Maduro has continued Chavez’ gun ban, and by all indications, the country is no better off as social and economic conditions crumble in a once oil-wealthy nation. Today, it’s difficult to find signs of prosperity anywhere in Venezuela – and without a means of self-protection, an unarmed population remains defenseless and unable to assert itself against Maduro’s regime.

Back in 2012, the Chavez-controlled Venezuelan National Assembly enacted the Control of Arms, Munitions and Disarmament Law, which avowedly aimed to “disarm all citizens.” There was little pushback from a helpless citizenry when the law, which banned the legal commercial sale of guns and ammunition to all citizens but not government entities, took effect in 2013.

Chavez’ claim that the law was supported by the people turned out, unsurprisingly, to be an utter fabrication: in the gun ban’s first year, only 37 voluntary gun surrenders were recorded, while there were more than 12,500 forced gun seizures during that time. For his part, Maduro has doubled down on Chavez’ gun ban, publicly destroying 1,939 confiscated firearms in 2016. 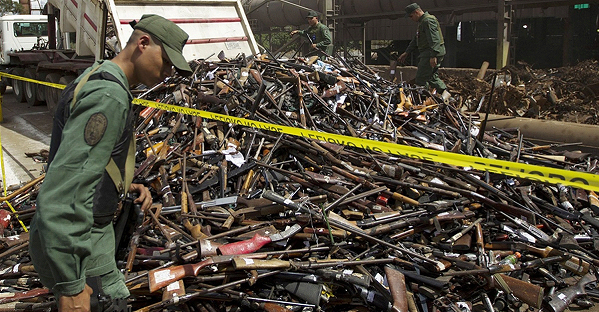 Enforcement is strict, as the penalty for illegally selling or carrying a firearm in Venezuela is a prison sentence of up to 20 years; even BB gun ammunition and airsoft guns are exclusively issued to police and military officers. In 2014, after Chavez died and Maduro took over, the Venezuelan government invested more than $47 million to enforce the gun ban, and grandiose displays of public weapons demolitions in the town square have become commonplace.

How was the right to bear arms so quickly and easily wrested from the Venezuelan public? Certainly they were never given any choice about the matter, under Chavez or Maduro. Moreover, in 2012 guns were less of a priority for Venezuela’s citizens, who at that time couldn’t imagine needing to take up arms against their government.

Now it’s not so hard to imagine. Since April of 2017, nearly 200 unarmed pro-democracy Venezuelan protesters were shot dead by government forces. The Venezuelan government has used live ammunition against unarmed protesters and dissidents on multiple occasions, though it’s difficult to know exactly how many deaths have occurred because government statistics are unreliable.

Independence Institute policy analyst David Kopel sums up the deadly imbalance of power post-gun ban: “Venezuela shows the deadly peril when citizens are deprived of the means of resisting the depredations of a criminal government… The Venezuelan rulers – like their Cuban masters – apparently viewed citizen possession of arms as a potential danger to a permanent communist monopoly of power.” 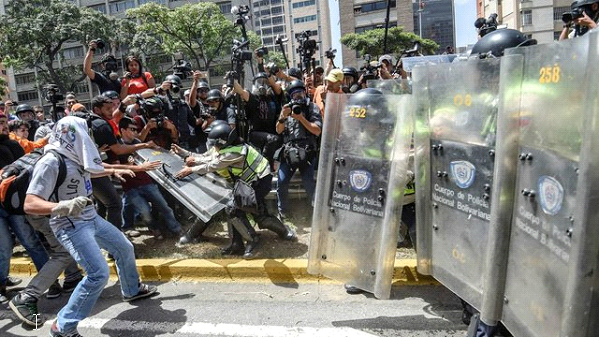 If the ostensible purpose of the gun ban was to curb violence, then it has failed miserably. In 2015, Venezuela had the world’s highest homicide rate, with 27,875 Venezuelans murdered that year (though it’s probably higher than that, as Venezuelan government-reported statistics tend to be “understated”).

For a basis of comparison, consider that Venezuela’s homicide rate was under 10,000 in 2012, and was just 6,500 in 2001 (the year before Hugo Chavez came to power). In September of last year, Amnesty International declared that Venezuela had a murder rate – 89 per 100,000 people, three times that of its volatile neighbor Brazil – that was “worse than some war zones.”

Yet, Maduro remains in power and the gun ban is still in effect. For the time being, it appears that the world will continue to observe with disgust as the Venezuelan government persists in its policy of disempowerment and suppression of the people’s most foundational human rights.