Warren Buffett Is Buying This One Oil Stock. Should You?

He’s the Oracle of Omaha, a bona fide American investing icon. When Warren Buffett makes a purchase, it has a ripple effect as other investors, from amateurs to hedge fund managers, follow his every move.

Following anyone blindly is never advisable, but it’s actually not a terrible idea to keep track of what Buffett’s company, Berkshire Hathaway, buy and sells. After all, his value-investing strategies have netted Buffett and his company billions of dollars over the years.

It was a major news item, therefore, when reporters recently announced that Buffett’s business had purchased 18.1 million shares of Occidental Petroleum (OXY) for nearly $1 billion. As huge as this purchase was, it wasn’t even the entirety of Buffett’s spending spree on OXY stock.

We can expect Buffett to approve purchases of stocks trading at low valuations, so let’s see if OXY stock passes this test. Currently, Occidental Petroleum has a trailing 12-month price-to-earnings (P/E) ratio of 35.78.

That’s not outrageous, by any means, but it also doesn’t sound like an irresistible value proposition. Also, Occidental Petroleum pays a forward annual dividend yield of 0.92%, which is fine but isn’t anything to write home about.

Since OXY stock appears to have rallied already, this prompts an uncomfortable question for fans of Warren Buffett: Why would he seemingly abandon his value-investing principles to buy Occidental Petroleum stock?

Bear in mind, Buffett is a big-picture, long-term thinker. We might be tempted to assume that he’s trying to ride the current spike in oil prices. Yet, that’s a short-term strategy, which really isn’t Warren Buffett’s style.

Don’t misunderstand – Occidental Petroleum is most definitely benefiting from elevated commodity prices. After all, drilling for oil at $100+ per barrel sure beats drilling at $70 or $50.

It’s not inconceivable that Buffett is betting, to a certain extent, that inflation will persist and that the global supply of fossil fuels won’t match the demand. However, Rob Thummel of Tortoise Capital suggested that there’s more to Buffett’s OXY stock purchases than a wager on oil-price inflation.

Thummel might be on to something here. Just recently, Occidental Petroleum announced an agreement to sell emissions-offsetting carbon credits to jet maker Airbus. Along with this agreement, Occidental Petroleum is preparing to build the world’s largest plant designed to remove carbon dioxide from the air and bury it underground.

So, Buffett might be interested in Occidental Petroleum because the company is aggressively transitioning into a clean-energy business. For the time being, though, Occidental is still primarily an oil business – make no mistake about that. 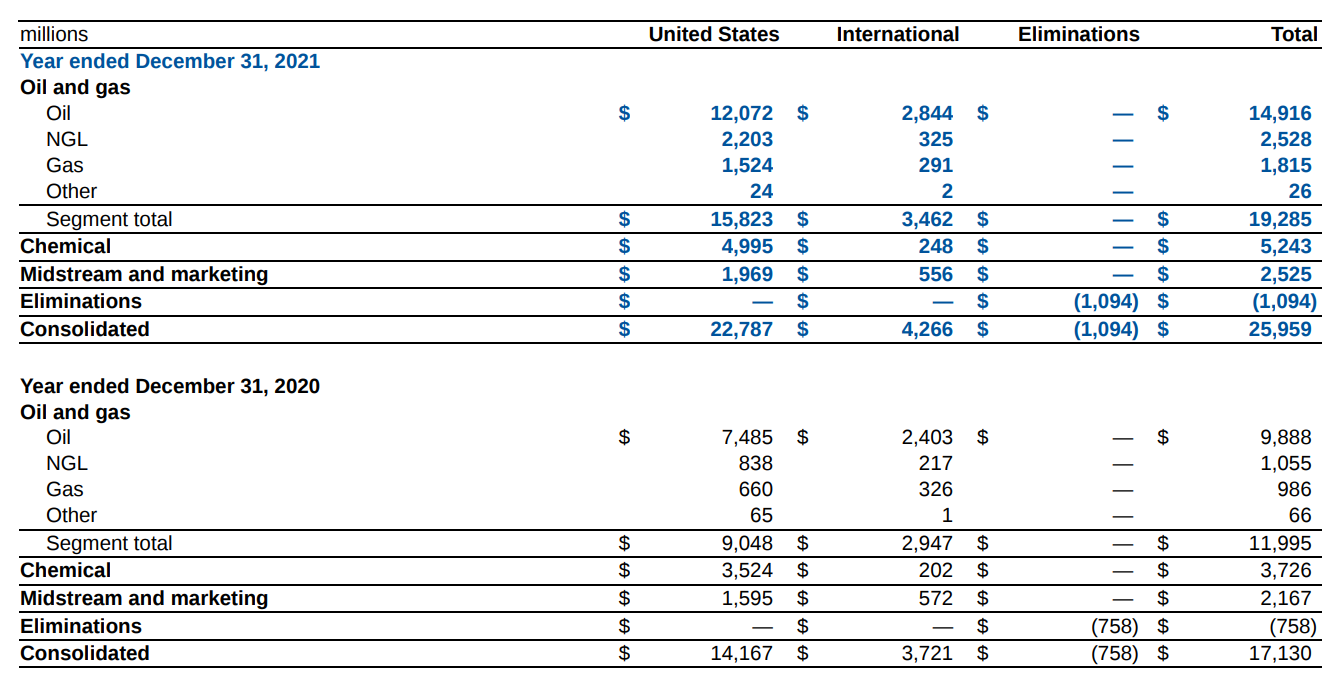 Without a doubt, Buffett has examined Occidental Petroleum’s financials carefully. He may be impressed with the company’s revenue growth, which is shown in the image above and has been considerable.

Across all segments, Occidental Petroleum’s total 2020 revenue was $17.13 billion. Fast-forward to 2021, and the total company’s revenue (minus eliminations) was much higher, at nearly $26 billion.

Remember, value is a relative thing, and it’s always interpretive. It’s not simply a function of P/E ratios and 52-week ranges, though these metrics can certainly be useful to value investors.

What’s not recommended is selling everything you own and using that capital to purchase shares of Occidental Petroleum. If you really want to be like Buffett, don’t just follow his moves; conduct thorough research, like he always does.

Then, form your own conclusion about OXY stock and any other stock you’re considering buying. Your wealth will be built not from one stock, but from a sensible, comprehensive investment strategy, like the one that Warren Buffett uses.