We Won’t Forget What the Recession Deniers Said in 2022

When the data doesn’t support your position, just move the goal posts. That’s the tactic of the recession deniers: career politicians who can’t afford to acknowledge what’s obvious to every hardworking American, so they just change the definition of “recession” and hope for the best.

A common rule of thumb is that two negative GDP growth prints in a row means that the U.S. is in a recession. The deniers prayed that, after a -1.6% GDP growth reading in Q1, the second quarter would eke out a barely positive reading, or at least a flat one.

That didn’t happen. Q2’s print of -0.9% means that the definition has been met and we’re in a recession, which is bad news for whoever’s in power. Sure, Joe Biden’s job is safe for a couple more years (unless there are impeachment proceedings), but congressional midterm elections are coming up in November.

And so, it’s time for the politicians to start playing games with semantics. Treasury Secretary Janet Yellen flat-out told NBC that “This is not an economy that is in recession” and “You don’t see any of the signs,” while Biden said to reporters, “We’re not going to be in a recession in my view,” and then prayed, “I don’t think we’re going to, God willing, I don’t think we’re going to see a recession.”

There’s nothing wrong with prayer, but Biden’s hopes won’t help struggling workers now. Under his watch, Americans’ overall satisfaction with their financial condition stands at a 12-month low. Moreover, 43% of U.S. consumers expect to add to their debt in the second half of the year. 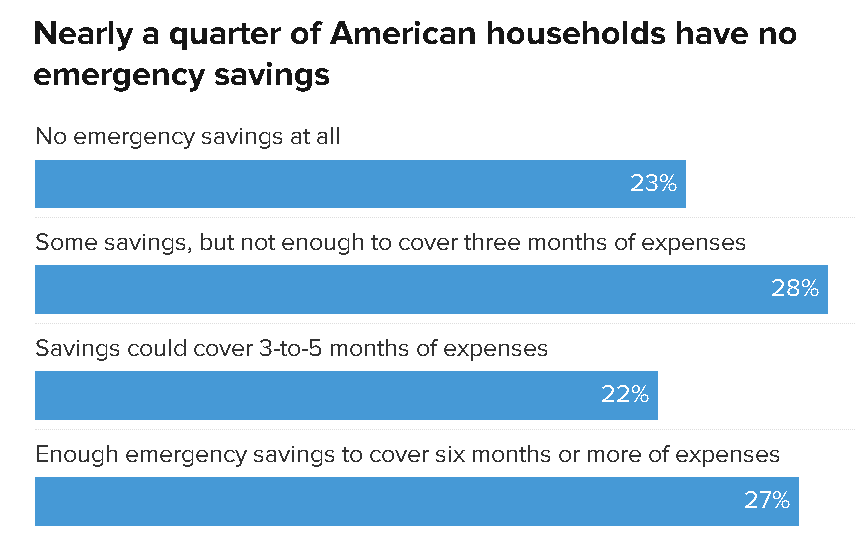 Clearly, relentless print-and-spend government policy is taking a toll. As shown in the chart above, slightly more than half of surveyed Americans have no emergency savings at all, or have some savings but not enough to cover three months’ worth of expenses.

The impact of inflation is undeniable, though some people with agendas with deny it anyway. As of Q2 2022, 48% of surveyed U.S. consumers said that the rising cost of basic necessities impacted their family’s lifestyle. That’s a sizable jump compared to 39% in the first quarter.

Need more data ammunition? No problem: As of June, 61% of Americans, or roughly 157 million adults, lived paycheck to paycheck. That figure was 58% in May, and 55% a year ago, so financial anxiety among the middle class is clearly on the rise.

The American dream of homeownership is also now out of reach for many people, unfortunately. A 30-year mortgage rate of 5% or more certainly isn’t conducive to homeownership, and you can thank Jerome Powell and the Federal Reserve Board for that.

And if the housing market is in decline, there are multiple ripple effects throughout the broader economy. Consider that, whenever someone decides not to purchase a new home, they’re also deciding not to buy furniture. Plus, they also won’t hire contractors, inspectors, builders, painters, a real estate agent, and so on.

Then there’s the most recent U.S. manufacturing survey, which is flashing a bright red warning signal for anybody willing to see it. S&P Global’s U.S. Manufacturing PMI, or Purchasing Managers Index, declined from 52.7 in June to 52.2 in July, the lowest reading since July 2020: 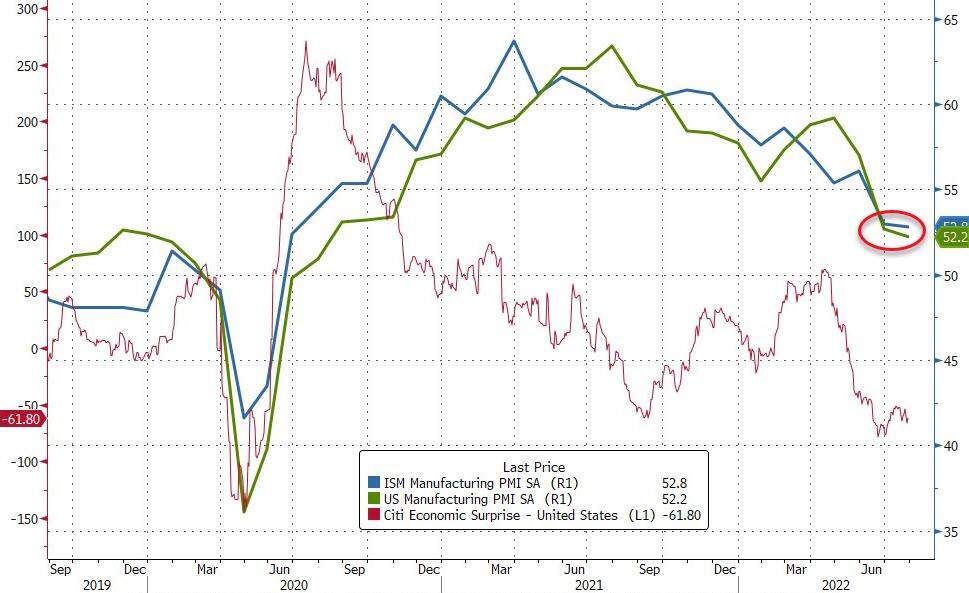 The recession deniers will use distraction tactics when the data is so overwhelmingly against them. Their go-to argument is that the U.S. unemployment rate is 3.6%. Even if you’re willing to accept that figure from the Bureau of Labor Statistics, don’t assume that it will stay that low for much longer as businesses across the country lay off workers in droves.

So now, the only remaining strategy is for the White House to redefine the term “recession.” President Biden’s Council of Economic Advisers recently declared that two consecutive quarters of GDP contraction is “neither the official definition nor the way economists evaluate the state of the business cycle.” Of course, Janet Yellen endorsed this claim.

Instead of using the same metric that’s been used for generations, the White House has suddenly decided that the National Bureau of Economic Research is the “official recession scorekeeper.” They’re not the only ones keeping score, though – America’s voters are watching and listening, and they’ll very likely be making some changes soon.