“We could have won it comfortably, but we were forced to suffer, like always. But the suffering makes the win all the more enjoyable.” This was the sentiment of a soccer fan as Argentina pulled out a nail-biter of a World Cup victory against France on Sunday.

Being “forced to suffer, like always” is, unfortunately, a profound and persistent truth in the South American nation. Now, as much as ever, soccer is much more than a diversion or a national pastime for downtrodden Argentinian families.

My mother’s side of my family migrated to Argentina from Italy in the aftermath of WW2. At the time, Argentina was the 3rd-largest economy in the world and was attracting many migrants, especially Germans and Italians following the economic mess of the war. It’s a country with great natural resources and incredible weather, but a deplorable government that cannot be trusted with savings.

My mom tells me stories of the days where she would raise prices multiple times per day at their local store because of hyperinflation.

Imagine receiving a check for services rendered or products you supplied, only for the purchasing power of the funds to evaporate on the way to the bank to deposit it into your account. This would happen to my mom because of a rapidly collapsing currency, and you could imagine this sort of firsthand experience would leave a lasting impression.

Not to mention having to go through what were essentially bail-ins, where the banks would freeze the depositors’ accounts to prevent a run on banks and then hyperinflate the currency. It’s no wonder my grandfather would stash some cash under his mattress until the day he died.

Argentina has been riddled with economic cancer for decades.

Granted, this was a notable tournament irrespective of Argentina’s economic conditions. In a spectacle that transcended the realm of sports, hundreds of thousands of fans crowded the streets of Buenos Aires after Argentina won its first World Cup championship since 1986.

As for the match itself, which took place in Qatar in front of roughly 88,000 fans, it could best be described as a roller coaster. Argentina took the lead but then France tied it up and, in a turn of events the best scriptwriters couldn’t dream of, it all came down to penalty kicks during overtime. 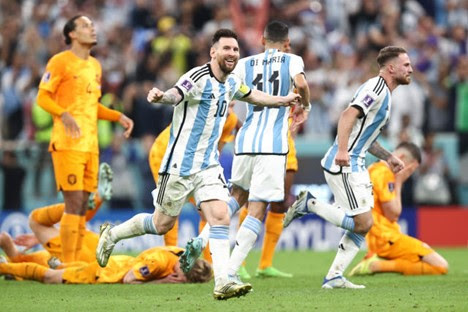 It was eventually decided by a final penalty kick from Argentina’s Gonzalo Montiel. The name being shouted in the streets, however, was Argentinian soccer star Lionel Messi, who was instrumental in Sunday’s victory.

Perhaps they weren’t thinking of it at that moment, but on a deep level, Argentina’s national pride was at stake throughout what might appear to just be a sporting event. There’s no denying that the World Cup meant a lot during a time when Argentinians don’t have much else to celebrate.

Suffice it to say that Argentina’s sense of national pride definitely needed a boost in 2022. While Americans might fret over a looming recession, Argentina’s economy has been in a deep and persistent recession throughout the year. Actually, stagflation is a better word to describe it because Argentina is facing a major currency crisis and the nation’s inflation is running at nearly 100%.

Besides, there have been problems beyond Argentina’s currency devaluation. For one thing, Buenos Aires had a prolonged COVID-19 lockdown period – one of the longest lockdowns in the world, in fact. In case all of that wasn’t bad enough, Argentina’s vice president and two-term former president, Cristina Fernández de Kirchner, was recently sentenced to six years in jail on corruption charges.

This isn’t to suggest that France didn’t have its own issues to deal with, of course. Still, all eyes were on hard-hit Argentina during Sunday’s matchup. Argentinian President Alberto Fernández indulged in a bit of competitive furor when he tweeted to French President Emmanuel Macron, “Dear friend… I hold great affection for you and I wish you the best for the future. Except for on Sunday. Argentina is my marvelous country, and it’s Latin America! Go, light blue and white!”

Irrespective of any particular nation’s points of pride, there’s a great deal to be learned from Argentina’s World Cup victory. Sports fans or not, everyone can admire the elite athletes’ refined nerves and ability to execute in a high-pressure situation, even with millions of eyes upon them and entire careers on the line.

Giving up was never an option for these athletes, and their elite mental game was just as important as their physical abilities. By extension, the same diligence, persistence, and emotional tenacity will be required of Argentina as a whole as the nation struggles to survive what could be another bruising year for the global economy.

This was the larger issue encapsulated in a game with a checkered ball, two nets, and nothing less than a nation’s identity on the line. Yes, Argentina will have to return to its financial hardships now – but at least for a weekend, millions could share in the photo-finish win that will be spoken about for generations.