YOUR FREEDOMS AND LIFE IN PERIL: Is Western Civilization’s Decline a Sign of End Times?

The unraveling of a history’s greatest enterprise, American democracy and the free-market system, is more apparent than ever today. Riots, a pandemic, economic turmoil and bitter political divisions are telltale signs of a nation and a world in decline.

Who is orchestrating this, and where is it all leading? Doug Casey of CaseyResearch.com and InternationalMan.com offers a searing view into the inner workings of the dark forces that control every aspect of the global political and economic machine.

Mr. Casey is not only an investor and market seer of note, but he’s also a cultural commentator with a strong following of independent-minded patriots in America and abroad. His International Man portal provides insights into the elitists’ schemes to implement broad-based capital controls, price controls, and even people controls.

Many of Doug Casey’s predictions found his writings and talks have come to pass in 2020, and Crush the Street had an opportunity to speak with Doug Casey recently about what he’s seeing in the world today. Unfortunately for people wearing rose-colored glasses, it’s not all good news as the Deep State’s iron grip on the media and on our freedoms is stronger than ever.

It’s not a new phenomenon, however, as Mr. Casey explains in our interview that Western civilization peaked just before World War I and has been going down ever since. This is despite the improvements we’ve seen in technology, as those improvements are outweighed by the deterioration in other areas.

As Casey further described in a riveting article on the Deep State’s pervasive influence on America and how it crosses party lines, the elite globalists have infiltrated both the Democrat and Republican parties. 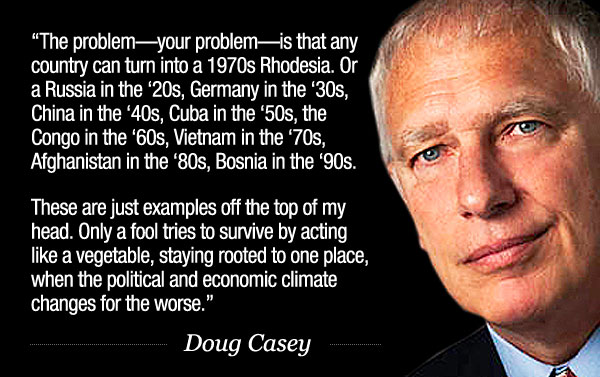 Deep State operatives are the top dogs in mega-corporations, colleges and universities, the media, and even the military. The want to keep things running the way they are right now, and they’re using the government to their personal advantage.

This clique of elites all attended the same schools, they generally come from the same social background, and they hang out at the same clubs. Typically, they have high incomes from state-related sources. And as you might expect, they share the same world view – one that threatens the very existence of the middle class.

Thus, it’s really neither the Republicans nor the Democrats who are in control. And if George Washington and Thomas Jefferson were alive and could see today what’s become of their great nation since the First World War, they would start a revolution.

And we can only imagine what our Founding Fathers would have to say about America’s warring political parties today. But we can get Doug Casey’s take on this dire situation we’re all living in, and as he describes it, Americans are now living on the ragged edge of a civil war.

Mr. Casey is predicting chaos, and it will happen sooner rather than later. Throughout Crush the Street’s talk with him, Doug Casey explains the enduring value of gold as a means of self-protection in these tumultuous times. It’s a must-watch interview that will open your eyes to the destructive forces that threaten the nation – and how informed citizens can prepare for the worst.